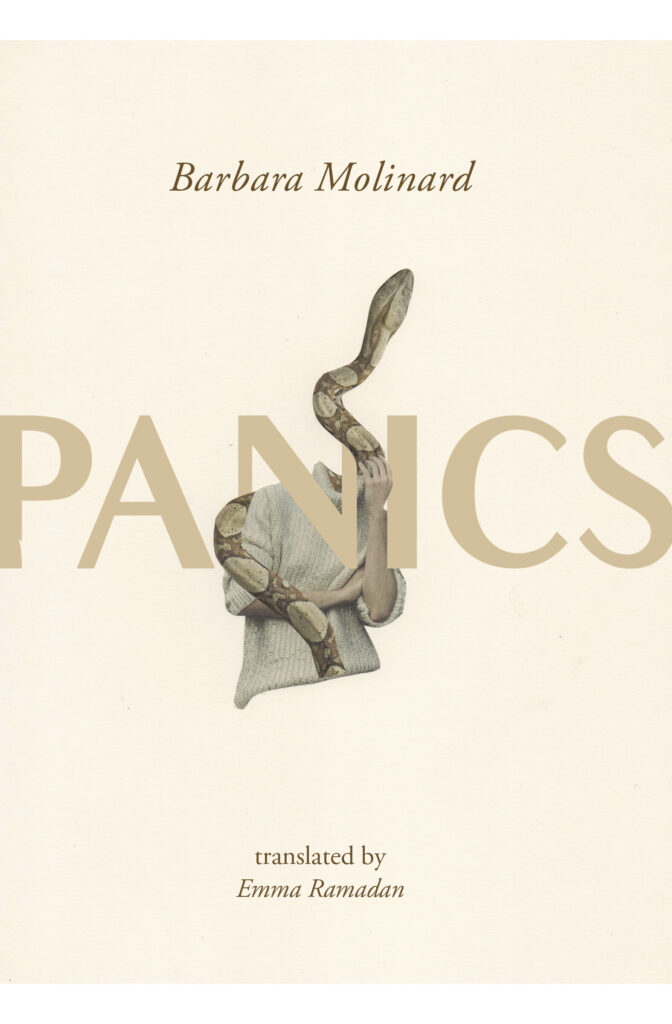 The following is a story from Barbara Molinard's Panics. Molinard (1921–1986) wrote and wrote, but published only one book: a collection of short stories titled Viens.

Their presence irks me, and if I could leave I would. Even if I had to crawl I would. But I have to stay here, sitting in my chair, motionless, useless. What business do these gentlemen have milling about my bed? Running around like headless chickens? Will they never leave me in peace? Must they poison even my final days with their presence? Seen from the outside, it’s incredible how small my bed is. It’s true that when I was in it, my feet and calves hung over the edge with only my torso and thighs able to extend. I had said to them, “I can’t possibly spend my whole life in this position.” To which they had responded, “No no, you’ll see, you’ll be like everyone else; in the end you won’t even notice it anymore.” I envied their optimism. But my life was a nightmare—at least the majority of my life, if I don’t count the few months during which I experienced a semblance of happiness thanks to my imagination. Wanting to know exactly how many fingers and toes I had, I started to count the digits on my hands and then those on my feet and then added them all together; since I never reached the same total, I kept having to start over, until the day when I came up with the same number three times in a row, which marked the end of that period that had allowed me both to amuse myself and to stop thinking. I sunk once more into the misery of my life. On the walls of the room I’m in, there are a considerable number of holes, each the size of an eye. At first, since the room had no windows, I thought it might be a ventilation system, but then I noticed that the holes appeared in pairs, and that the distance between them was the same as the distance between two eyes. I realized that from behind the walls of my bedroom, those men were spying on me.

They remove the box spring and mattress from my bed and replace them with a plank of white wood. I wonder why they’re doing this. I’d also like to know why they made me get out of bed today. Did they have a feeling something was going to happen to me? Something that would mean they could no longer leave me in my bed and so, instead of waiting for the event to occur, they chose to get out ahead of it? I don’t much like these three gentlemen. I don’t know what about them arouses my suspicion. The way they all burst into laughter, laughing until they choke, as though someone had said something funny when not a single word has been uttered; it makes me uneasy. After measuring my bed, they transfer it onto four planks, each about fifty centimeters high, and start to saw them. Witnessing the delirious joy and the quasi-demented frenzy with which they saw, I’m beginning to think that these gentlemen live only for work and that without it, they would have no reason TO BE. I fear that my life will have no other meaning than to give them the possibility to exist. Their activity is feverish. I can tell they’re anxious to put me there, where I will soon be. I speak about this place and this location only in vague terms because uttering certain words, even in a whisper, can have bad repercussions: it can drive you mad with horror.

So I should change topics. My work could have been a happy digression: sewing. “Sew,” they said, “sew,” they repeated endlessly, “that will take your mind off of things.” All right! But sewing in the dark is terrible. Sometimes the thread forms knots and when you try to undo them, you lose the thread, and then you don’t know where it is anymore and you’re worried about making sure you start back up in the right place. No one is there to tell you and you can spend months, years, a lifetime groping in the shadows. That’s what I did. When, weary, I gave up, they yelled at me, “Pathetic! You think you’ll find it if you don’t look?” Their bad faith horrified me.

They’ve finished sawing the planks, and now they’re positioning them around my bed frame and nailing them together. The box-like appearance of my new bed provokes a particular anxiety. But I’m wrong to be frightened. Surely they don’t plan to put me in that coffin, where I would have to fold myself in two with my legs over my head! If that were the case, I’d have to think these gentlemen, who are clearly insane—it’s proof enough that they’ve sequestered me here in the darkness under the pretext that I have to earn the right to see—might also be downright mean. You can’t think that . . . definitely not, because then . . . I’ve developed a habit of thinking too much and this is where it leads me: a nameless terror, outrageous ideas, distress that fills my heart with tears. A cold sweat drips down my face and my teeth chatter as though I have a fever. I’d like to tell these gentlemen, “Leave, I beg of you. I’m fine here in my chair, and I ask nothing more of you than to leave me here.” But I can’t utter a word, and they’re here, gesticulating and grimacing, buzzing around my bed-box with staggering expressions of triumph and ferocity in their eyes, all fixed on me. They’ve sawed off three of the legs of what was my bed and now they’re hacking away at the fourth. Once that’s gone, the box will rest on the ground.

I’m shivering and trembling nonstop. My head, suddenly extremely heavy, droops on my chest. Hunted, I’m struggling to climb out of a well where their flat, rough hands push me down little by little. After haunting my solitude and throwing a twilit veil over my life, will the shadow of these three gentlemen pursue me until the end of time? Eyes shut, I see their pale mouths and their menacing gazes; ears muffled, I hear their metallic laughter resounding and reverberating endlessly through space. Nothing around me is palpable anymore; even my body seems to have abandoned me. My brain spreads before me like an immense labyrinth; a frightened thought rushes in every direction, evading me. I go insane trying not to lose it; I hunt it through the shadows. I have to catch it. It belongs to me. It has to come back. But it runs off into the night, oblivious to me. In its pursuit I hurtle down bottomless precipices; I sink into gooey deserts, populated by formless forms that dash through the pallid night, sometimes emitting strange cries. The thought, as though taunting me, stops from time to time seemingly to wait for me. My hope of reaching it in those moments spurs me to overcome whatever obstacles lie between us at any cost. But just as quickly, it takes off again with dizzying speed for an obscure point where I can’t find it anymore. I wander looking for it in the opacity of the night for centuries on end. Hope turns to despair and reason crumbles.

The three gentlemen suddenly appear in front of me; with an impenetrable gaze they scrutinize me and then murmur, “He’s searching for it. Now he’s ours,” and they disappear while I continue to make my way through the shadows. “Where are you?” I cry, suddenly frightened at no longer being able to see the thought and, because I let myself be distracted by these gentlemen, not knowing which way it went. “I’m here,” it responds in a small, distant voice. “Come, I’m waiting for you.” A mocking laugh accompanies these words. I rush blindly into the night; passing glacial shadows, I run without stopping, prey to panic. Sometimes I see the three gentlemen. Their sharp gazes follow me as I continue to make my way through the night. They’re buried under thousands of boxes. One of the boxes bursts into flames as I pass. I think that one’s mine.

“The Bed” from Panics by Barbara Molinard. Used with permission of the publisher, Feminist Press. 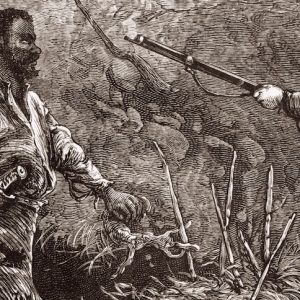 Chinelo Okparanta on William Styron’s Confessions of Nat Turner and Writing Across Racial Identities Nat Turner, a Black man who lived and died in the state of Virginia in the early 1800s, is often credited with leading “the...
© LitHub
Back to top