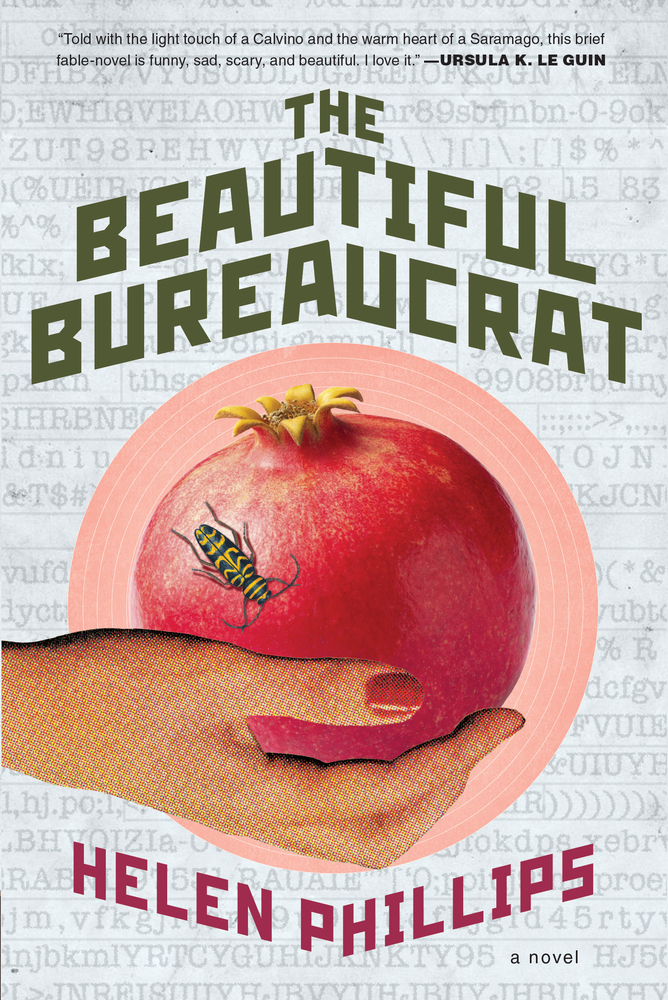 The following is from Helen Phillips’s novel, The Beautiful Bureaucrat. Phillips is the author of the collection, And Yet They Were Happy, and her work has been featured on NPR’s Selected Shorts and appeared in Tin House, Electric Literature, Slice, BOMB, Mississippi Review, and PEN America. She is an assistant professor of creative writing at Brooklyn College.

After the twenty-seventh file on Monday morning—de angelis/hektor/paul—Josephine was already antsy, bored, though she tried to fight the feeling. She became suddenly desperate to know what, if anything, resided in her desk. All the drawers slid open easily, revealing only emptiness and paper clips and pads of Post-it notes, except for the lower right-hand one, which remained stuck even when she yanked.

She knew she needed to return immediately to the great stack of files, yet she stood up and kicked the drawer. Her sensible dark shoes were scuffed already anyway. A second kick, a third, a fourth, then a ferocious tug, and the drawer squeaked open half an inch. She tugged more, pleased by her progress, but it was yet another empty drawer. She stared into it, its silent gray angles, before sitting back down and picking up dean/malcolm/alexander.

Right then The Person with Bad Breath opened the door, in response (she presumed and feared) to the sound of shoe kicking metal. That mouth, that nose, those eyes—they still somehow failed to coalesce into a face. When her eyes closed for a brief instant in a blink, all she saw of The Person with Bad Breath was a blank space where the image of a face should have been.

“All is well?” The Person with Bad Breath said.

Josephine had yet to receive any instructions about what name or title she ought to use for her boss; her failure to ask now meant that she never would.

“All is well,” she murmured dutifully, stroking DEAN’s paperwork.

The Person with Bad Breath lingered in the doorway, which gave Josephine the opportunity to gather her courage and ask the obvious question, the question that had been hovering ever since she opened RENA MARIE IRONS’s file on Friday.

“We appreciate your curiosity,” The Person with Bad Breath said with a parched smile.

“But no need to be curious.” The door was already swinging shut.

Upon reaching the fiftieth file of the day, Josephine rewarded herself with a trip to the bathroom, which had that familiar urine-and-bleach smell of institutional restrooms everywhere. There was someone in the middle stall. It’s an uneasy music, the music of two women peeing side by side, and she wondered if the other woman was as self-conscious about it as she was, the stops and starts of her relief crossing paths with Josephine’s.

As Josephine stood to pull up her tights, she noticed the blood on the floor. She gasped—four, six, seven, nine droplets—how could she have missed them on her way in? It looked as if some small wounded creature had limped through the stall.

Her disgust morphed almost instantly into shame, and then disappointment, as she realized the source; the grab for gobs of toilet paper, the swift stuffing of the underwear, the inconvenience of being an animal.

But that still left the whole mess on the floor, three droplets now smeared by her shoe. She’d wait in the stall until the other woman left, and then she could clean it all up. She was standing beside the toilet, breathing as quietly as possible, when a hand came reaching under the stall door.

Josephine couldn’t cork the scream that sprang out of her.

The hand waggled a wet paper towel in its manicured fingers.

Engulfed in a full-body blush, embarrassed by both her blood and her scream, Josephine accepted the paper towel. She knelt down and wiped at the floor.

“Thank you,” she kept saying as the woman twice more brought her paper towels.

When she finally slid the lock and opened the stall door, Josephine was shocked to find a petite bright-blond woman who looked to be in her twenties, a bubble-gum-pink suit straining against disproportionately large breasts. It hadn’t occurred to her that other young women might work here. She’d assumed, based on the handful of dark-clothed bureaucrats she’d seen scurrying around a corner or darting into an office, that all the employees must be half dead, like The Person with Bad Breath.

The woman stood blocking the entrance of Josephine’s stall, almost too close for comfort. Close enough for Josephine to inhale her candy fragrance.

“Hi!” the woman said, sticking her hand out to shake as though she didn’t mind that Josephine had just been wiping her own blood off the bathroom floor. Still embarrassed, Josephine offered a timid hand. As she shook it, the woman gave an odd little sneeze, trish-iffany.

“Bless you,” Josephine said, noticing with some alarm how bloodshot the woman’s eyes were. She was perfectly put together in every other way, but those bloodshot eyes revised Josephine’s guess of the woman’s age—she had to be well over thirty.

“Trishiffany!” the woman repeated. “That’s my name. My parents couldn’t pick between Trisha and Tiffany, so they went with Trishiffany. Trisha means ‘a patrician’ in Latin, and Tiffany means ‘manifestation of God’ in Greek, so whatever that adds up to. Anyway, Trishiffany Carmenta—pleased to meet you.”

“Good thing I came to this bathroom today!” the woman said, oblivious to Josephine’s awkwardness. “I seriously prefer the bathrooms that aren’t on the File Storage floors. I mean, truly, I hate the bathrooms on the File Storage floors. I swear the dust finds its way onto the toilet seats! It really seems worth it, just bopping one floor down—or up—so you never have to go in File Storage. But still, sometimes, out of laziness, I’ll just . . . but today I thought . . . something pulled me down to the ninth floor, you know? Speaking of which—how goes it in Room 9997?”

“Fine,” she said. But the thought of all the hundreds of windowless offices in the building brought on a very unpleasant pressure at her temples. She squeezed past Trishiffany and beelined to the sinks.

Trishiffany followed, narrowing her eyes thoughtfully at Josephine’s reflection. Josephine noticed that her own eyes were more bloodshot than they’d ever been. Not nearly as bloodshot as Trishiffany’s, but still. She couldn’t stand to look at them; instead, she looked down at her hands wringing themselves together in the automated lukewarm stream. She wished she could choose cold water, the freshness of that on her bloody fingers.

“Five feet four and a half inches, right?” Trishiffany said.

She nodded a third time. If Trishiffany hadn’t been so gracious about the paper towels, she would have been put off by the woman’s uncanny accuracy.

“Sweet!” Trishiffany said, clapping like a little girl. “I am so good at that. But it’s not too hard in your case; you’re perfectly average, with a perfectly even face, like a robot.”

“I meant ‘perfectly’ as in perfect,” Trishiffany said quickly, but not quickly enough. “Besides, you know what the glossies say about averageness.”

Josephine had no idea what the glossies said about averageness. She examined herself in the mirror—her pathetic skirt, her sagging cardigan, the choicest of the few garments she’d rescued from boxes before everything was put in storage. She’d done the best she could for her first day of work, getting dressed among rotting towels in the stranger’s bathroom.

She insisted on walking Josephine back to 9997; as they walked, Trishiffany combated the permanent flat drone of the hallway with a crescendoing monologue about how much she loved getting pedicures and going to ladies’ nights and musicals and stuff, why not live it up while you’ve got life, right—

“What’s that sound?” Josephine was forced to interrupt after waiting fruitlessly for an opening in her speech.

“What sound?” Trishiffany said, a smile from memories of a popular musical still radiant on her face.

Josephine spread her arms outward to indicate the entire hallway.

“Oh, that sound!” Trishiffany almost giggled. “I never even hear it anymore. That’s the typewriters.”

“It could drive you mad, couldn’t it?” Trishiffany said lightly. “But don’t worry, it just blends into your brain. You’ll stop hearing it after you’ve been here a little while. It’s one of those things you get used to, like the way there’s never good cell reception.” And Trishiffany carried on about her favorite bar, the firemen were always there on Thursdays, but since Josephine was married maybe she might not be up for that kind of thing? Oh yes, Trishiffany had noticed the wedding band first thing, duh!

“Not to icky-pick,” Trishiffany said as Josephine pushed open the door of 9997, “but you really shouldn’t leave your door unlocked ever. Even if you’re just going to the bathroom, you know?”

Josephine nodded emphatically, eager to escape both Trishiffany’s friendliness and her own burdensome feeling of gratitude.

“Thank you,” she said, pressing the door shut behind her, “thank you, thank you!”

“Mind if I call you Jojo?” Trishiffany was saying. “I’ve always wanted to call someone that. Such a cute nickname for Josephine!”

HS89805242381: There had been a merciful Post-it note tucked between two rows of the computer keyboard this morning—memorize/destroy—and now, returning to her desk, Josephine could input the password as deftly as though it were her own Social Security number.

Preoccupied—and, as had become routine at this time of the month, disheartened—by what happened in the bathroom, she absentmindedly reached for the mouse to locate the entry for fikiotis/marjorie/lordes. But the Database froze, refusing to let her scroll. Her throat tightened at this discovery; she could only move around the Database by using the search function, so she could never know its size.

Still, she typed the number of fikiotis/marjorie/lordes into the search function. She was cross-checking the file when it occurred to her that she hadn’t told Trishiffany her name. She looked up from the screen, trying to remember. Had she let it slip? She noticed a dark smudge on the pinkish ill-colored wall. Her fingers fell away from the keyboard, reached over to touch it. As her gaze moved outward from the smudge, she realized it wasn’t just years of tack holes and tape that made these walls look so tired. These were scratches, smears, shadowy fingerprints, the echoes of hands.

She wanted to call Joseph, but ever since he’d started his new job he never picked up at work. Anyway, as per Trishiffany’s promise, her own cell was showing just one faint bar of service, and there was no landline on her desk.

The four walls were very slowly, almost imperceptibly, moving closer together, pressing in toward one another, toward her. She tried to take a deep breath but there was no air. She stood up, knocking fikiotis/marjorie/lordes off the desk, paperwork swirling downward. She ran to the door and escaped the room.

She’d go right back in, of course; it was only a momentary thing, a passing panic. Yet her feet continued to carry her away from 9997, down the concrete hallway toward the emergency exit sign. She had a goody-two-shoes flash of fear as she pressed against the heavy door. But no sirens blared when she burst into a silent stairwell. A flight of concrete steps led upward and downward, no end in sight.

From THE BEAUTIFUL BUREAUCRAT. Used with permission of Henry Holt and Company, LLC. Copyright © 2015 by Helen Phillips. 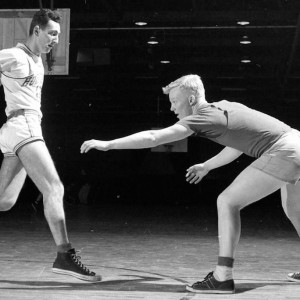 When I Quit Basketball to Become a Writer Two years ago when I was a fellow at the Sewanee Writers’ Conference I was assigned to Tim O’Brien’s fiction workshop....
© LitHub
Back to top