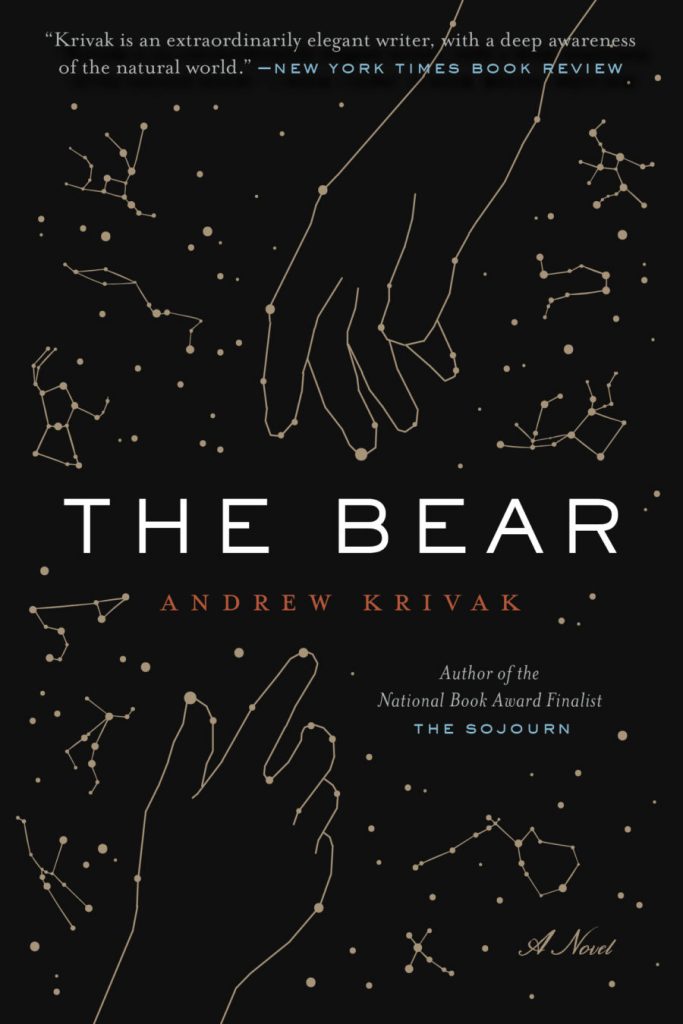 The following is from Andrew Krivak's novel The Bear. Krivak is the author of The Signal Flameand The Sojourn, a National Book Award finalist and winner of both the Chautauqua Prize and Dayton Literary Peace Prize. He is also the author of A Long Retreat: In Search of a Religious Life, a memoir about his eight years in the Jesuit Order, and editor of The Letters of William Carlos Williams to Edgar Irving Williams, 1902–1912.

The last two were a girl and her father who lived along the old eastern range on the side of a mountain they called the mountain that stands alone. The man had come there with a woman when they were young and built a house out of timber, stones pulled from the ground, and mortar they made with a mix of mud and sand. It was set halfway up the mountain’s slope and looked out onto a lake ringed with birch trees and blueberry bushes that ripened in summer with great bunches of fruit the girl and her father would pick as the two floated along the shore in a canoe. From a small window in front of the house—the glass a gift the woman’s parents had given to her  after  having received it themselves from the generation before, so precious a thing had it become as the skill for making it was lost and forgotten—the girl could see eagles catching fish in the shallows of an island that rose from the middle of the lake and hear the cries of loons in the morning while her breakfast cooked over a hearth fire.

In winter the snows began not  long  after  the autumn equinox and still visited the mountain months after the spring. Storms lasted for days and weeks at a time, drifts climbing up against the house and burying paths as deep as some trees grew high. Often the man had to wade for firewood or trudge out to his toolshed at the edge of the forest with a rope tied around his waist.

But when the winds settled, the skies cleared, and the low sun shone again, the man would wrap the young girl warm and tight in a pack, walk out into the stillness of winter, and float on snowshoes made of ash limbs and rawhide down to the frozen lake, where the two would spend the day fishing for trout and perch through the ice.

Snow covered so much of the girl’s world from mountaintop to lake that for almost half the year all she could see when she looked out that window was a landscape at rest beneath a blanket of white.

And yet no matter how long winter lasted, spring followed, its arrival soft and somehow surprising, like the notes of birdsong upon waking, or the tap of water slipping in a droplet from a branch to the ground. As the snow melted, black rocks, gray lichen, and brown leaf cover emerged from the once-uniform palette of the forest floor, and the thin silvery outlines of trees began to brighten with leaves of green against the groupings of hemlock and pine. Those were the days when the girl left the house in the morning with her father and studied a new world that pushed up from the dirt of the forest and emerged from the water at the edge of the lake, days in which she lay on the ground beneath a warm sun and wondered if world and time itself were like the hawk and eagle soaring above her in long arcs she knew were only part of their flight, for they must have begun and returned to someplace as of yet unseen by her, someplace as of yet unknown.

There was, though, one day among all four seasons of the year the girl loved best. The summer solstice. The longest day of the year.

The day on which the man told her she had been born. And he made it a tradition to give his daughter a gift on the eve of the solstice. She didn’t remember receiving the earliest ones, but she cherished them just the same. A carved wooden bird so lifelike, it looked as though it could fly. A purse made of deer hide and sinew that was her mother’s and in which she kept colored stones found along the lake. A water cup shaped from a piece of solid oak and from which she drank. A painted turtle that walked slowly from the man’s hands as he unfolded them and which she kept for the summer as a pet, then released down by the lake in the autumn.

On the eve of the year the girl turned five, her father gave her a bowl of fresh strawberries after their supper and said, I have a special gift for you tonight.

He handed her a box made of birch skin, around which a long piece of dried grass was tied in a bow. She untied the bow and opened the box. Inside was a silver comb polished brightly and looking like nothing she had ever seen before.

She stared at the comb for a long time, until the man broke the silence.

This was your mother’s, he said. I have been waiting to give it to you. When I watched you fighting with your hair down on the lakeshore, I thought, This is the year.

She reached into the box, took out the comb, and held it as she would a thing delicate and to be revered.

I love it, she said quietly, closed her hand around the comb, then climbed into her father’s arms and hugged him.

The girl had heard the voice of the  man in her ear for as long as she could remember, so she never wondered if there was someone else who might have once spoken to her as well. But when she was old enough to walk beyond the house and into the woods or down to the lake, she began to notice something about the animals. There were two foxes darting in and out of the downed-log den with their skulk of pups. Two loons escorted the baby loon across the deep middle of the lake every summer. And when she saw does grazing in spring in a small meadow at the base of the mountain, there were the fawns right by their sides. So after the girl had practiced running the comb through her hair and the man tucked her into bed and kissed her good night, she looked up at him and asked, Why are you alone?

The man knelt down at her bedside. I’m not alone, he said. I have you.

I know, said the girl. I mean where did my mother go? Everywhere around me there are things you tell me were once hers. But she’s not here.

She’s here, he said. In what we remember of her.

But I don’t remember her, she said. What happened to her?

The man bowed his head and lifted it again, and he told his daughter that when he and the woman buried their parents and came to the mountain and built their house, she was all the world he knew, and he believed for a time that the two of them would live alone in this world for the rest of their days. Until she discovered she was going to have a child.

Me, said the girl.

You, said the man. But when the time came, she had to struggle a great deal to bring you into the world. And after that struggle the only thing she could do was nurse you and rest. She was strong. Strong enough to live through the summer and into the fall to give you what milk and nourishment she had to give. But, in time,   I knew she would leave us for that place where the struggle to bear a child had taken her, and neither you nor I could follow. And one evening before the hunter’s moon she went to sleep and didn’t wake.

The man turned away to look into the dark for a moment, then turned back to his daughter. She sat up and reached out from underneath the blanket and took his hand in hers.

It’s all right, she said. I understand.

He smiled and said, You’re a wise girl. But there’s still much you can’t understand. So much you shouldn’t have to. Not yet.

Well, like how even after all these years, years in which I’ve had you to think about every minute of every day, I still think of her. I still miss her and wish she were here.

The girl lay back down on the pillow. Will I miss you one day? she asked. One day, the man said.

The girl was quiet then and the man thought she might have fallen asleep, but she asked again into the dark, Are you sad that you have me instead?

Oh no, not for a moment! the man answered in a voice too loud for the room, and held the girl’s hand tighter. Not for one moment. You see, you are the joy I have beyond any sadness or wish that remains for what once was. Without you . . .

His voice trailed off and he stared down at the floor, then back at his daughter.

Without you I’d be nothing but alone, he said.

And without you I’d be alone, said the girl.

A hint of moonlight had begun to creep with the summer dusk into the house through the window, and the man could see traces of the woman in the face of the girl.

I know what we’ll do, he said. Tomorrow we’ll climb to the top of the mountain where your mother is resting. She loved the mountain. She used to say the summit looked like a bear. I want you to see it, too. Would you like that?

Good, the man whispered, and kissed her on the forehead a second time and tucked her in tight. Then rest well. Tomorrow we have a big climb.

The girl rolled over and huddled beneath her blanket, and before the moonlight had left the window she was asleep.

Excerpt from The Bear. Copyright © 2020 by Andrew Krivak. Published by Bellevue Literary Press: www.blpress.org. Reprinted by permission of the publisher. All rights reserved..

Behind the Mic: On Highfire by Eoin Colfer, Read by Johnny Heller 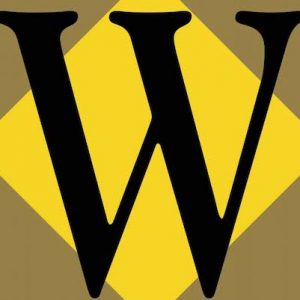