The Ballad of Big Feeling 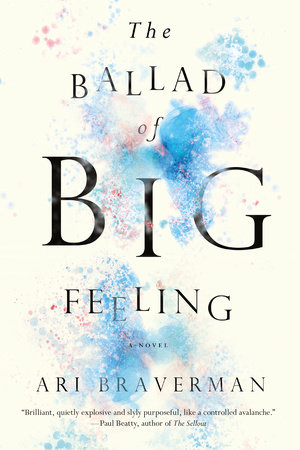 The following is excerpted from The Ballad of Big Feeling by Ari Braverman. Braverman is a fiction writer from Iowa City by way of New Orleans and New York. Her work has appeared in BOMB, Guernica, Smokelong Quarterly, and at Tammy Journal.

“Anyway, he just slipped out of me,” her cousin—a  new mother—continued over the phone. “It took forty-five minutes. The placenta came an hour later.”

The woman had always thought of the placenta as a thin membrane, like a plastic bag. She learned recently it’s actually a whole organ, but she still can’t remember the different stages of labor.

“That’s unbelievable,” she said, unsure if she had chosen the correct adjective. “I’ll come as soon as I can.”

“I have to see my mom anyway.”

There is a pause—the woman thinks, A postpartum pause, not a pregnant one!—and the stupidity of her own sense of humor nearly makes her laugh. But of course, she doesn’t. This is a serious moment.

“I haven’t been over to see her lately. We’ve just been so busy.” The cousin’s voice is telling. Isn’t she so sorry?

“How is she feeling?”

Weeks later the woman sits in the back seat of her cousin’s car, crossing a lake at 66 miles per hour. The speed limit is 70; the new father is driving. The woman is alert for any change in her cousin—a sudden inner voluptuousness or docility—that might indicate she has become a different person.

Below them the water changes colors with the sky as the sun plunges toward the lake. The baby sleeps in his car seat with his lips puckered in the inverse shape of a nipple. The woman cannot help but imagine his little body in the event of a collision, spiraling through the air, his pale blanket flung out like a cape.

“Do you ever ride with him in your arms?”

“Oh no! Never!” The cousin laughs. She has turned around in her seat to talk, and the woman finds comfort in the chicken pox scars on her nose and forehead. Her broad face still reminds the woman of a clean dish.

And yet the cousin’s body is different. It had once been so sleek and firm, perfect for athletics (that build runs in the family; the woman’s mother has it, too), and had made the woman jealous for years.

In person, the tits of first-time motherhood are tremendous. The woman tries to locate the feeling of having a womb, but cannot. It is easier for her to pretend to remember having been contained by one, despite its chemical shortcomings and the truncated duration of her stay.

And there it is, the purpose of her visit, which has become a constant flickering around the woman’s brain stem.

Her mother is sick.

Soon their house will belong to a family of strange strangers.

“Well, thanks for picking me up. I guess my dad is out of town.”

“Thank you for coming.”

It is nighttime when they enter the subdivision. The cousin and her husband own their place because he has a good job with the real estate development company. Walking into the big blue house, the woman feels flayed down to her marrow. She might just fly apart. Immaculate textiles abound. Abundance glows from every surface. Even the potted plants look like they have self-esteem. Out back, framed by French doors, the lawn unfurls beneath a floodlight. Red clouds racing above the ornamental trees mean rain—a cozy proposition, combined with the ceiling fan and the lull of the suburbs. Back home, the woman only rents a small house on a cul-de-sac with her lover.

“How did you figure out how to do all this?” As she speaks, the woman’s mouth tastes like salt. Travel must have made her very tired. It has been so long since she and her cousin have seen each other. Childhood flickers inside the woman’s brain as a series of shared baths and breakfasts. But here is her cousin now, in life, a tall stranger with forty extra pounds and a productive sex life.

She wants to travel back in time and size, to shrink, to climb inside her cousin, come out again, and grow up differently.

“She’s been nesting,” the husband says and touches his wife on her hip. For the first time the woman regrets this leg of her visit.

The woman nods silently and accepts the infant into her arms. He wiggles and sighs. “This is a little scary,” she says. The woman neither enjoys nor dislikes his odor, though it does conjure an image: a wheat field warming in the sun.

Every time she holds a baby, or speaks to someone about their own children, the limits of the woman’s frame of reference lurch into view. She is always just talking about herself.

“I can’t believe anybody is ever this small.”

The praise feels good, like a dribble of warm liquid. She wants to travel back in time and size, to shrink, to climb inside her cousin, come out again, and grow up differently.

But proof: the baby boy slips into sleep. The rain arrives as a rollicking storm.

After dinner and drinks the woman does the dishes and joins the new father for television. His wife has gone to take her first shower in six days. In the recliner to the left, he looks like a small boy bedraggled by a long day. He can barely keep his eyes open. The woman has a white blanket tucked around her legs, and a surge of contentment makes her generous.

“Go to bed. I’ll watch him until she comes back.” She flaps her hands at the plastic bassinet that contains his son. Thunder shakes the windowpanes but, nestled in blankets, softer than his tiny pillow, the baby sleeps on.

“It’s so good of you to be here,” says the new father. “Family means a lot to her. And I’m sorry your man couldn’t come. It’s been a minute since we’ve seen you both.” He swallows the final word with another yawn, and the woman stares into his gullet.

“See you tomorrow,” she says.

Alone, the woman goes to the refrigerator and retrieves another beer, hidden behind many pouches of breast milk. She settles back on the couch and balances the clicker on her knee. When she changes the channel the baby wakes up. Before she remembers he’s too young to see, she believes he is looking at her.

“Hey,” she says. He whimpers, and as she lifts him from his bedding, his head flops backward. He wails. A little drunk, fearing rebuke, the woman takes him outside.

There are fewer mosquitoes than usual because of the rain. Darkness and water mass beyond the pale plane of the porch. She can’t see the flagstone walk or the locust trees. Thinking of a warm sack of grain, she holds the baby a little tighter. He has stopped crying to listen to the rain. He is three weeks old. Two cats—a tabby and a black—creep out from behind the woodpile and slide themselves around her ankles. They want food. The baby wants food. His little mouth smacks open and closed. He gazes toward her face, vulnerable and benevolent at the same time. In the nighttime his eyebrows are invisible. “There’s nothing for you in these tits,” the woman says and inserts her pinky between his gums. His sucking pulls the blood into her fingertip, and she tries to remember that, for now, he is just a small animal.

Excerpted from The Ballad of Big Feeling by Ari Braverman. Reprinted with permission of the publisher, Melville House.

All I want for Christmas is Mariah Carey's memoir. 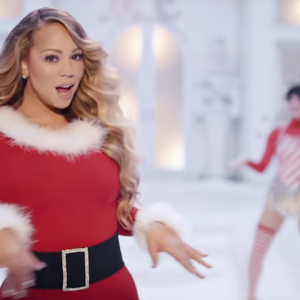