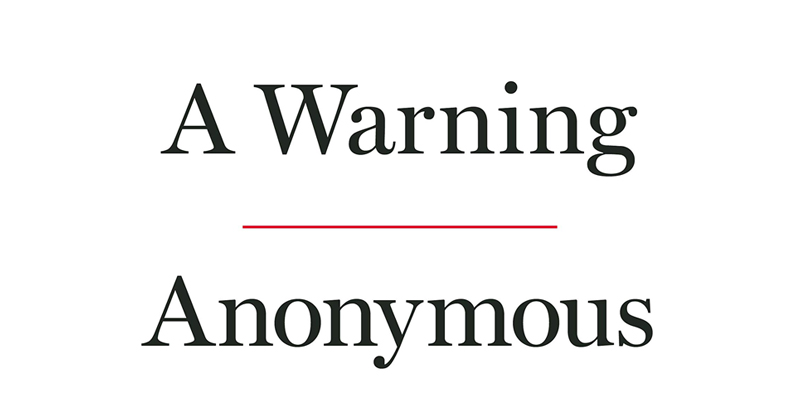 The anonymous author of A Warning has answered some of the public’s questions.

Last night, the anonymous author (identified only as “a senior Trump administration official”) of the new book A Warning and that op-ed in The New York Times did an AMA (“Ask Me Anything”) over at Reddit.

Here are a few highlights from the question and answer session with the (also anonymous, to some degree) Reddit users:

Why be be anonymous instead of showing accountability so there is trust?

Not everyone will agree with my rationale, but anonymity has a long tradition in American politics, as far back as the birth of our Republic. When debating whether or not to ratify the new Constitution, for instance, the Founding Fathers wrote public essays about the controversial subject and disguised their names under pseudonyms. They hid their identities, not because they were scared to debate the issue openly, but because they wanted the public to focus on the message and not the messenger. They didn’t want their personal involvement to be a distraction. I’m not Alexander Hamilton or James Madison by any stretch, but I don’t believe they were cowards for using anonymity as a tool to refocus the debate. Trump thrives on distractions, and anonymity is a way to deprive him of his favorite weapon of mass distraction–personal attacks–and force the discussion to center on the substance, his character.

We’ve seen this on full display in the past few weeks, as the President has mercilessly attacked honorable public servants, from an anonymous whistleblower to aides on his own National Security Council. He can’t win on ideas, just on mud slinging and personal attacks. So he’s trying to use the long arm of government to unmask and undermine his critics.

Will you pledge to donate profits from your book to ACLU or some type of charity? Just to make it less sleazy…somehow?

My motive in writing this is not financial, and I’m not seeking to profit off of this warning. If there are royalties from the sale of this book, I’ve pledged to donate them substantially to nonprofit organizations focused on government accountability and on supporting those who stand up for the truth in repressive regimes around the world. Here at home, I hope one of the recipients will be the White House Correspondents’ Association to help support a new generation of young reporters in a time when truth is under attack. I will have more to say on this in the near future.

Suppose Trump wins the 2020 election. What should we as American people be on the look out for ? What did you leave out of your book?

For starters, my original argument has been thoroughly debunked. In the New York Times op-ed, I suggested that the “Steady State” of top officials in the Administration could ameliorate Donald Trump’s lapses in judgment. I was dead wrong. No one can thwart his attraction to wrongdoing. Americans cannot and should not rely on a group of unelected bureaucrats to maintain stability. Their confidence in the Executive Branch should be measured primarily by their faith in the President himself, not be the people around him, even if those people are able to dissuade him sometimes from making poor decisions.

That said, anyone should be able to see the chaos has worsened as the guardrails have come off. The President has little handle on the day-to-day operations of the federal government and is trying to run our Administration with a skeleton crew. He is hurtling between different controversies and ignoring important matters of state, abusing his power with some regularity, undercutting vital democratic institutions daily, and debasing the national dialogue tweet-by-tweet. We can expect this and much, much more if he is reelected. The last guardrails are coming off, and if reelected he will feel emboldened to follow those dangerous impulses to unknowable and alarming ends.

There is a great deal that was left out of the book, out of necessity. But there is more to come, in due course.

Do you think that you’ll ever unveil your identity in the future?

As far as anonymity is concerned, I will not keep my identity shrouded in secrecy forever. I am not afraid to use my own name to express concern about the current occupant of the Oval Office. Donald Trump has not heard the last of me. There is more to come. Other people who are currently serving, and who have left, are also considering adding their voices before votes are cast in 2020. We talk about this with some regularity. In the meantime, Trump must answer to the American people for his own conduct instead of redirecting their attention.

Trump will hear from me, in my own name, before the 2020 election.

Just how illiterate is Trump? Aside from his weasel words and outrageous claims of “best-ever” everything, his vocabulary seems to consist of strong, sad, beautiful, and disgrace. He speaks like a child.

The children I know tend to speak more respectfully.

Do you think Trump is suffering from Dementia or some other serious neurological disorder?

Any objective measure of his conduct, whether in public or private, would point to the reality that something is very, very wrong with our President. If there were a diagnosable disorder, we’d be unlikely to know the truth, as it’s become almost second-hand for the President to dispatch aides to lie on his behalf, including about his stability and mental acuity.

How does the President have such a hold over the Republicans? Why are none, for the most part, holding him accountable for his actions/decisions?

It’s not just Republicans. We’ve all been guilty of falling into tribal political traps and supporting people who, under normal circumstances, we’d disavow. It’s one of the greatest dilemmas of our time. The echo-chamber effect of the social media era has been disastrous for civic wellbeing, and it needs to be a major focus of our national restoration.

Do you believe Trump will be successfully impeached? Will this lead to civil war?

There is no doubt in my mind that Donald Trump demanded a quid pro quo from Ukraine in order to disrupt the 2020 election. Everyone in the White House knows this, including the President himself. Now the question is whether it rises to the level of “high crimes and misdemeanors.” I personally think that it now does. To be clear, I am not cheering on the President’s impeachment, and at the outset of this process I believed firmly in reserving judgment until the facts were on the table. Impeachment is a sobering, last-resort process for holding the commander in chief accountable, not something to be undertaken because we think the President’s tweets are vile and his rhetoric is ugly. We politicize this at our own peril. If Congress goes about it the wrong way, impeachment will further divide our nation.

What can the average concerned citizen do to truly make a difference so that he doesn’t win again in 2020?

I am going to offer what—in any other year—would be the worst advice you could possibly offer during the holiday season: It’s time to talk politics this Thanksgiving. I’m not suggesting arguing with your relatives and friends about Trump, but rather engaging earnestly with one another about the divisions that have split our country. Ask each other, what is at the source of the discord? How do we emerge from this era not divided but unified? What can we each do to better understand the other side and debate with dignity, not malice? Those are the political questions to be confronted around Thanksgiving dinner. For many, this will be their last chance to have that dialogue at home before campaign season heats up and detracts from civil discourse.