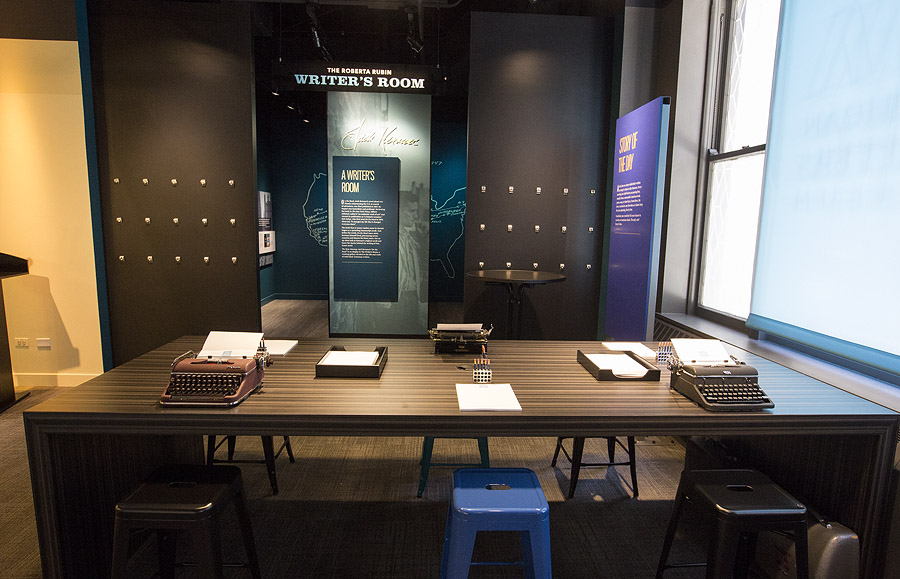 A Place for Book Lovers to Play... and Smell

The American Writers Museum, which opened yesterday in downtown Chicago, is decidedly not a library. While there is a Readers Hall filled with comfy couches and a selection of popular works to browse, this first and only museum dedicated to celebrating American writers and their influence on American history and culture is chock full of content that appeals to four of the five senses (sorry, nothing to taste here).

The museum, located on the second floor of a Michigan Avenue office building and across the street from Millennium Park, is seven years in the making. The brainchild of founder Malcolm E. O’Hagan, it was developed by a talented and diverse board of directors, national advisory council, content team, and subject matter experts from around the country—everyone from professors and authors, to literary critics and publishers.

AWM President Carey Cranston says the museum’s exhibits and content are meant to commemorate the past, but the programming celebrates the present; the goal is to inspire future generations of readers and writers. 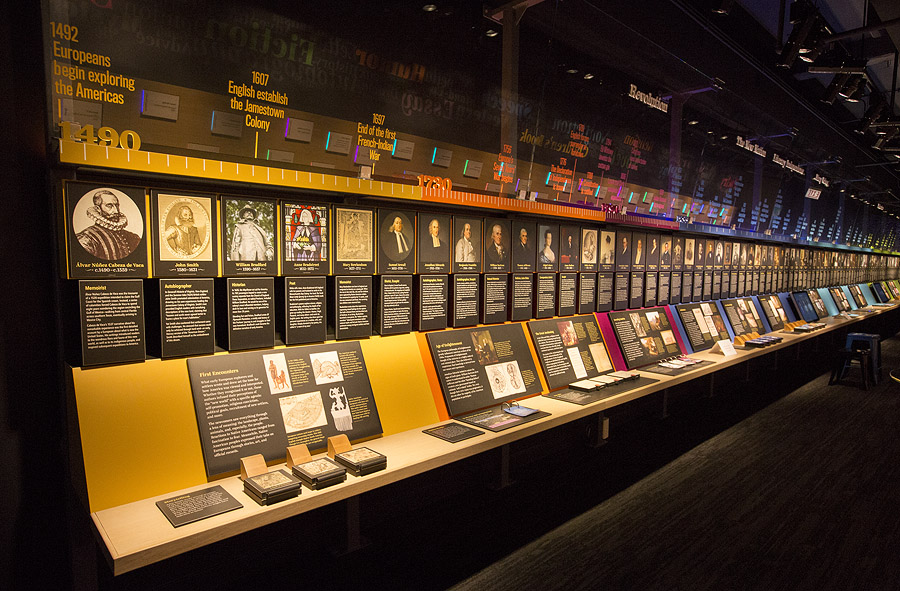 Photo by Barry Brecheisen, used with permission from the American Writers Museum.

“Writers” has broad meaning here: in one room there’s a timeline of 100 American Voices the museum deems the most significant literary contributors from the country’s founding through to the late 20th century, people like Ernest Hemingway, Emily Dickinson, and August Wilson. On the opposing wall there is a Surprise Bookshelf where visitors can flip panels to find fun facts about Tupac Shakur’s lyrics, take in the aroma of fresh-baked cookies from a Julia Child recipe, or chuckle at one of Charles Schulz’s comic strips.

In The Mind of a Writer exhibit, one feature is a Mad Libs-style game with famous published works; another lets visitors discover the origins of words like “scaredy-cat” (first used by Dorothy Parker in her 1933 short story “The Waltz”) and “frenemy” (created in 1953 by a gossip columnist to describe the Cold War U.S. relationship with Russia). Beautiful watercolor illustrations give life to Octavia Butler, Henry Miller, and Gloria Anzaldua, bookending interactive wall displays that dissect the writing process for creating a masterpiece, including selecting the right adjectives, crafting dialogue, and building a routine to get the job done. If you’re into audiobooks, there’s a touchscreen where you can hear excerpts from A Wrinkle in Time or Lincoln’s Second Inaugural Address.

Perhaps the most sense-engaging exhibit of all is Palm: All Awake in the Darkness, an immersive installation inspired by the poet W.S. Merwin—a room full of live palms and other tropical plants. Guests are encouraged to read the writings of Merwin and other poets while listening to a soundtrack of birds, breezes, and a Hawaiian chant, and then scribble a poem on the paper provided; the artists will then turn visitors’ musings into compost for Merwin’s palm garden, a long-held tradition by the poet.

For those fascinated by technology of old, take a seat at a table full of vintage typewriters, paper, and pencils and create your own piece of flash fiction, then tack it to the Story of the Day wall. Next, mosey into the Writer’s Room, which features one influential writer’s life and contributions; currently, Jack Kerouac’s first typed manuscript of On the Road, completed on a 120-foot long scroll, is on display through mid-October. 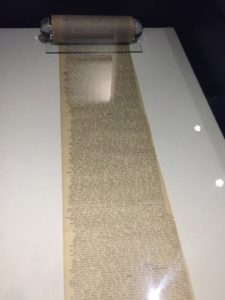 Photo by the author.

Chicagoans will be pleased to see a permanent exhibit featuring hometown writers who have shaped the American literary scene over the years, including Sherwood Anderson, Ida B. Wells, and L. Frank Baum. Here too are touchscreens that bring up maps highlighting famous Chicago literary landmarks, writers’ haunts and homes. Cranston says that while Chicago is uniquely suited to host a writers museum, he envisions traveling exhibits for other cities to experience in the future. In the meantime, you can check out their interactive map of author home affiliates and plot a cross-country road trip to visit the Robert Frost Farm, the House of the Seven Gables, or the Harriet Beecher Stowe Center.

The AWM also rightly acknowledges the many influential children’s books that helped to inspire a love of reading in so many of us. “This is where it starts,” says AWM Director of Operations Christopher Burrow. “Everyone who comes in here will identify with someone.” So of course there is a Children’s Literature Gallery, full of brightly colored banners featuring beloved scenes from The Cat in the Hat, The Wonderful Wizard of Oz, Goodnight Moon, and more. Kids can hang out on the couch and pick a book from the shelf to read, or they can interact with mini exhibits featuring Langston Hughes’ poems, E.B. White’s Charlotte’s Web, Louisa May Alcott’s Little Women, and Maurice Sendak’s Where the Wild Things Are.

While the museum itself is small, visitors could easily spend an entire afternoon playing, learning, reading, and writing. Programming includes screenings, author talks, workshops, and children’s activities. If you are a literary nerd, the American Writers Museum may just become your second home.

Learn more about the American Writers Museum, and how to visit at americanwritersmuseum.org.

Jenna Sauber is a communications professional and freelance writer living in Washington, DC. 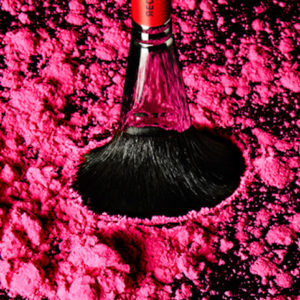 While visiting family over the holidays, an uncle pulled me aside. “You have gray hair,” he whispered, with alarm and not a little...
© LitHub
Back to top
Loading Comments...