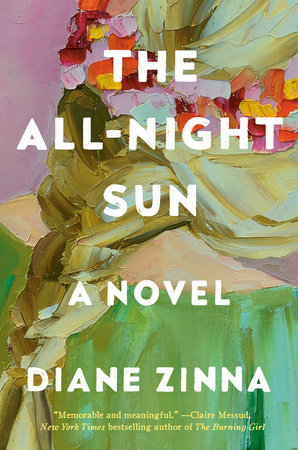 The following is excerpted from Diane Zinna's debut novel, The All-Night Sun. Zinna is originally from Long Island, New York. She received her MFA from the University of Florida and went on to teach creative writing for ten years. She formerly worked at AWP, the Association of Writers & Writing Programs, which hosts the largest literary conference in North America each year. She lives in Virginia.

When I accepted Siri’s invitation to travel home with her for the summer, it was like taking her up on a beautiful dare. I can still see her with her backpack, 18 years old, lightly crossing tran­soms of age and language to make me feel comfortable among her teenage friends. In dreams Siri leads the way through Gamla Stan’s crowded caramel streets, turning to smile at me as I follow behind. Back in the United States, before I impulsively accepted her invi­tation, I had been Siri’s teacher. Like the midnight sun that does not set, my decision to go to Sweden with her spread its undying light over everything. My grief was like that, too. I fell asleep to it. I awakened to it.

In essays, Siri had written about this place imbued with magic: trolls; water spirits; the holiday called Midsommar, when everyone flees the cities for the countryside, when everyone turns young again. Midsommar, when the sun didn’t set and night’s torments didn’t come. Really? She’d agreed, yes, it was that green, that fresh, that new—everything would be just thawing out.

She wrote about her home back in Sweden. She was an art stu­dent. I asked her questions to color in her descriptions of the peo­ple she knew, of her country home in Olofstorp, of the traditions she kept with her family. She had a sister with long hair who worked at an airport, cleaning planes. She had a brother. She shrugged through a description of her town. It’s not like here, she said. She missed home, but she didn’t know why. I said, put down your pen. Just tell me about it. What colors do you see when you think of home?

And then we were there. Lush canvases of wet meadow opened one upon the other, bright green oceans that undulated and tipped with the wind like liquid. Did we create that place with our words? I could barely remember the words she used to ask me to come home with her for the summer break. It doesn’t seem possible that there were words enough to make me risk the job I loved. Teach­ing gave my life some aspect of normalcy, and I thought then that it was normalcy I craved. But there was no hesitation. I bought my ticket that very day. Maybe all those years alone were building to that moment, that invitation to somewhere else.

I grasp at early memories of our trip now, and they are other­worldly, other-sensory. The purple door of her family’s country house—did it really smell of lavender? I remember our three days in Stockholm as sticky and sweet, maybe because we got ice creams from vendors on three different corners, one right after the other. I remember sitting there beside the water, trying to talk through bites, laughing because our lips were numb. We shielded our eyes and watched tourists taking banana-boat rides out beyond the Viking-style, curl-prowed ships in the harbor. And when I think of our talks there, they can sometimes feel like sun in my eyes.

We visited many beautiful towns there. I could never pronounce their names right. I couldn’t grab hold of the sounds to remember them. With so little English around me, I had the feeling of being half-awake the whole time. In some ways, it was like being a child, when you could just close your eyes during a conversation, slide down under the table, and run around. But I was not a child. I was almost 30 then.

She missed home, but she didn’t know why. I said, put down your pen. Just tell me about it. What colors do you see when you think of home?

For weeks we zoomed through storybook towns with square-cobbled streets and curved one-lane roads barely able to accom­modate Siri’s tiny car. In the countryside, there were dark red farmhouses with white frames around their windows. We jumped from barn lofts, laughing so hard strands of hay got caught in our teeth. We laughed as though we were both children.

And on the last day of our trip, she arranged for a group of us to drive to Öland, an island off of Sweden’s eastern coast, where we would camp and celebrate the holiday. She said that at Midsommar it would even be warm enough to swim, but I could see my breath when her brother, Magnus, helped us load the car that morning. And I could see his breath when he stooped to check the air pressure in the tires, and when, after all the other girls had gone inside, he stood to face me for the first time in days and mutter a goodbye.

“Goodbye,” I repeated softly, unable to match his emotionless tone.

As he walked back into the house, I stepped into the place where I’d seen his breath in the air and willed myself to feel the warmth he’d shown me a week earlier, before he’d grown cold. I wasn’t just going away for two days—these were the last days. Didn’t he feel time running out like I did?

I suppose all those sunlit nights and long twilights had made it feel like we had enough time to work everything through.

All of Sweden was intoxicated with the endless June sun. The animals, too, seemed dopey and confused. That day in Kalmar, right before we started across the great Öland bridge to the island, a moose walked slowly across the road, blocking traffic for a while and blinking peacefully at the honking cars.

And then we were crossing the bridge, four high miles. Siri squinted hard at the white lines through the clouds that kept touching down. Her friends slumbered in the backseat, a mash of black clothes, smeary eyeliner, and punk-rock hair. They were tentative to use the English they’d learned in school even though they spoke it fine. Sometimes, when they were drinking, they tried more. I sat in the passenger seat, a crate of beer like insurance on the floor between my feet.

I had been looking forward to this trip being just us, but at the last minute, Siri had invited the other girls.

“The day is going to warm up,” Siri whispered, trying not to wake her friends.

I was grateful that she was whispering. I thought it meant she was ready to talk to me about all that had happened, with her, with her brother. Through the fog, I could just glimpse the water beyond the bridge. There were promises of waves, but they gath­ered no energy.

“I don’t know if you can see it, but there’s a castle on that shore called Kalmar Slott. It’s from medieval times. People sometimes get married there. It’s very beautiful at night. They light it up.”

I tried to see, but when there were breaks in the fog, all I could make out was the glitter of the sound. I turned to look behind us, but there was a yellow inner tube pressed against the window of the hatchback.

“You’re still going to swim with me, right?” she asked.

I shook my head, but I expected I’d cave to her and be swim­ming soon. Over those weeks, I’d let Siri dye my hair blond, then blacken the ends. We’d gone shopping for new clothes. I’d cut up the T-shirts I’d brought to make them look punk rock, crimped my hair with an actual iron, and skinny-dipped for the first time in my life. Afterward, in a woodsy bar, with my head still wet and with damp clothes, I shouted “Skål!” and danced with my eyes closed—not to keep the room from spinning, but because I couldn’t bear to see all of that reflected back at me in the mirror above the bar. Siri had liked it—that I was trying, that I was shak­ing off the shell of grief I’d worn so long.

“There is an old legend. It says you mustn’t go swimming on Midsommar because an evil spirit named Näcken waits out there in the water, sitting on a rock, playing a fiddle. He is waiting to pull you down. In the story, a maiden stabbed herself in the heart rather than go with him, and white water lilies turned red with her blood. If he gets you, he’ll make you live under the water with him forever.” Siri smiled mischievously. “You see? We have to swim.”

She laughed, but I shushed her, afraid that her friends would awaken and commandeer the conversation and bring it back to Swedish. I was grateful for her smile, her playfulness now. I missed the first part of the trip, when we traded stories and taught each other what we felt were beautiful words in our languages. I had taught her languid, gloaming, and verdant, which remain charged with memory even now.

We were halfway across the bridge when another car pulled ahead of us and Siri stopped short.

She looked over at me with concern. “You okay, Lauren?”

I unclenched my fingers and rested them flat against the seat. I wanted to appear calm. I told myself the white fog was sealing us in.

I saw her mouth moving silently. She knew I was afraid of bridges. Maybe she was praying for me. Siri prayed a lot for a young person, in a manner less contemplative than compulsive. She said it helped her to feel closer to her mother, who had died when she was five. She’d never shared how her mother passed, only that her death had been hard on her and her siblings and it was the reason for the rift between her and her brother.

Before this trip, she’d told me some other things about Magnus: that he didn’t want her to go to college, that he was too critical, an artist himself and disdainful of her desire to study art in school. For these reasons, I had disliked Magnus before I met him. I had disliked the sounds I first associated with him: keys dropped on the dining table, the loud slam of his door, the way he talked to him­self on the other side of our shared wall. When Siri had asked me to stay away from him, it had been easy to promise. Now all I could do was think of him.

Behind the Mic: On The First Actress by C.W. Gortner, Read by Gabrielle de Cuir 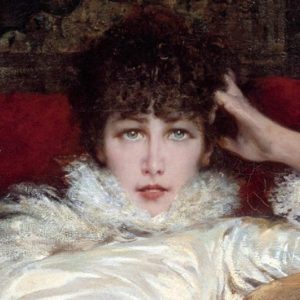 Behind the Mic: On The First Actress by C.W. Gortner, Read by Gabrielle de Cuir Every Monday through Friday, AudioFile’s editors recommend the best in audiobook listening. We keep our daily episodes...
© LitHub
Back to top