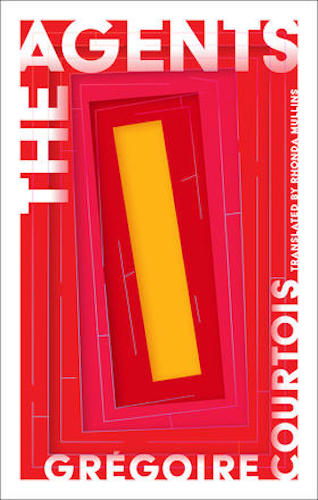 The following is excerpted from Grégoire Courtois' novel, The Agents. Courtois lives and works in Burgundy, where he runs the independent bookstore Obliques. A novelist and playwright, he has published four novels with Le Quartanier. Mullins is a writer and translator. She has received the Governor General's Literary Award for her translations. She currently lives in Montréal.

The place where we live is the place where we work. We are agents. It is our status, our identity, our source of pride. We do our work in front of machines from another century that purr like pets, while behind the tinted windows of our office, thick cloud cover creeps east to west.

We are armed. Time and experience have provided us the gunpowder and the shot. We have a stockpile, and we use it when we need it. Against others, against ourselves, against time as it stands still, we wage the eternal battle of something against nothing and, when one of our enemies drops dead to the ground, we are delighted that chance has chosen us to carry the flame of activity for a few more days. Without combat, we might not know that our presence here is necessary. That’s why we are always fighting.

Outside of these times, we are free, and we fight to try and stay that way.

The office is our life. No one can remember a time when humans lived outside their workplace, or distant centuries when work was just an activity like any other.

What we know is that lifeless days now stretch out before us without anything to do other than boil water, drink it, kill, and avoid being killed.

This world is what our predecessors left us; they too had inherited it.

These cubicles are our homes, this carpet our earth, these colleagues our fellow citizens, and woe betide any who renounce these fundamental principles, because for them, there is only the street, far below. Even though none of us have ever set foot there, even though we cannot make it out from the floor-to-ceiling windows, we know that, as harsh as it is for us, as difficult as our existence is, there is nothing worse than the street.

We do not walk alone through the heavy sadness of our days. We are part of a group, a band of brothers and sisters—a guild. We have our tensions, differences, and rifts, but we diligently follow the unspoken laws of the group, which is what guarantees our survival.

Some agents walk alone, but that comes with the dark price of constant worry and vigilance, under the threat of assault by a guild that has set its sights on them. These solitary agents are called the Underlins. They are invisible; they hit hard and fast. They work on the 122nd floor, like fearful scavengers, condemned to hide even their shadows in the shadow of the armoured walls. They live a life of fear, alertness, and flight, the door to their cubicles always closed, with no sound escaping that would betray their clandestine activities.

There are the Underlins, and there are the guilds. Because waiting alone for death to come is a job in addition to the one we already have, and waiting for it together gives you a chance to sleep sometimes, while someone keeps watch.

In our guild, there is Solveig, whose body is entirely hairless, because she finds hair vulgar.

The hair on her head, of course, the down on her arms, along with her eyebrows, eyelashes, and anything else that could grow on her is meticulously removed, so meticulously that her silhouette is the only visual texture she can stand seeing sticking out above the surface of the earth. Solveig believes that the future of agents lies in purity. Purity of mind, of course, but the immaterial can achieve fruition only with the aid and the discipline of the body. Her appearance and her diet, which many reduce to anorexia, reveal a fanatical ascetism, the only path, she tells us, to elevating our condition.

In our guild, there is also Théodore, who once severed all ten of his toes because of a date entered on a calendar known only to him. At the dawn of a new personal era, he thought his toes were good for nothing more than grasping objects like a primate, which he never did, of course. And so, one calm night, with no sound emerging from his cubicle, he amputated what he called “vestiges of the archaic interface.” Not a cry, not a word, he beat a bloody path toward the future of our species.

Some say he keeps his severed toes in a jar of formaldehyde hidden in his office, but no one has ever dared check or even ask him if the story is true.

Since that time, Théodore has walked faster than other agents along the narrow corridors of the floor, and we have come to understand that speed is what maintains his balance. Go fast or fall: we could have made it our motto and amputated our own toes, but we preferred to abstain, no doubt because Théodore is the only one with the mysterious calendar.

In our guild, there is Laszlo, and even though he doesn’t call himself an artist, it is the title we have quite naturally given him. Since his arrival in the office, his entire life seems to have been a long, powerful performance with a changing audience, where every moment can be studied for its purity or complexity, like one of the important components of a surrogate life through art. Laszlo’s life is performance, spectacle, or novel. Snippets of his work are disseminated on the public networks with such regularity that some Veep Watchers believe he is not a true agent but rather a Veep producing fiction in a well-appointed studio, somewhere far away. Only we know the truth, and we have also calculated how dangerous it may be to keep company with Laszlo, as we risk becoming part of his work, presented to an audience in a distant future, a near future, or an unanticipated present. Information is critical in the office. Revealing anything about our movements or habits on public networks could be fatal. And yet Laszlo remains one of us. Maybe being around him, and then making him part of our guild, was in the end motivated by a secret hope to feel the sudden warmth of exposure, the spotlight of glory, or simply the reassuring tranquility of a useful existence, despite the risks. Laszlo is one of our tickets to the light. If we were to become only minor characters, even formless extras, in his personal novel, at least we will not have been decisively nothing.

Excerpted from The Agents by Grégoire Courtois, translated by Rhonda Mullins. Copyright © 2022. All rights reserved. Published by Coach House Books.

The full list of writers nominated for the 1971 Nobel Prize in Literature includes just one woman. 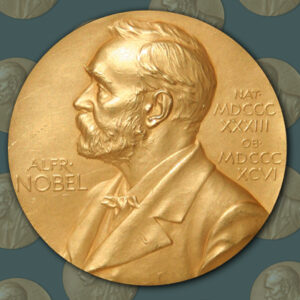 The full list of writers nominated for the 1971 Nobel Prize in Literature includes just one woman. As Kaj Scheueler reported for Swedish newspaper Svenska Dagbladet, newly opened archives from the Swedish Academy have given...
© LitHub
Back to top