The Aesthetics of the Dictator

Donald Trump's Radical Remaking of America is Anything
But Conservative

I first saw Donald Trump and family on E! Entertainment Television in 2006 when I was 14. The channel was brought to Mauritians courtesy of DSTV, a sub-Saharan direct broadcast satellite service. I gorged myself on a world that seemed impossibly decadent: celebrities and their rooms full of shoes that they would never wear; the way an unfortunate event of little significance would provoke life-threatening meltdowns.

This was apparently the American dream: billions of dollars bestowed upon you, 21st-century royalty, but it was all very democratic, all possible if you worked hard enough. Celebrities never ceased to tell the cameras how hard they grinded, and Americans believed them—believing made possible by seeing glimpses of them off camera, on the street. There was also the sense that stars were worth more, culturally speaking, if they came from a legacy of “old money.” You couldn’t aspire to that kind of class. They were regal, they were the pinnacle of desirability. Slavery was never mentioned.

Trump has been shaped by similar cultural currents that propelled Hitler to power: he is a Romantic figure of myth, wielding Enlightenment tools of control, descended from regal heights to supposedly save white American civilization.

Presenters would languish unironically over the Versailles-inspired design of Trump’s New York penthouse, a gilded, gross thing bedecked with some art and lots of replicas. Faux rococo. Much was made of his tremendous concern with aesthetics. “Tremendous” and “beautiful,” I’d learn in 2016, were some of his favorite words, along with “huge” and “classy”—a furore of superlatives, reflecting him, the objects he likes, the towers he built, his image. Very dictator-chic.

Hitler and his obsession with size immediately came to mind. “Why always the biggest? I do this to restore to each individual German his self-respect,” he once said. The Third Reich was a project of national remaking and re-dignifying, after all, and while most dictators seek to remold “their” country in their image, Hitler and Trump are remarkably similar in the way aesthetics take prime place in their lives and policies.

If Trump had a Pinterest board, it would be full of images from Louis XIV’s Versailles; Hitler’s was ancient Greece and Rome. Architecture and aesthetics were central concerns of both men, who favored structures that would exemplify absolute power: the former as the gaudy manifestation of luxury in a time where citizens were dying of poverty (in 2018 as in the 1700s), the latter embodying the strict, towering totalitarian ideal that demanded absolute subservience and absolute fear. It is no coincidence, either, that both nationalists have aesthetic ideals that stem from foreign cultures of a lost time. These symbols of grandeur are not homegrown: they are part of a project of white European myth-making, and myth—in Trump’s America and in Hitler’s Germany—is everything.

Myth was the narrative that enabled Hitler to meld aesthetics with politics and technology—Jewish liquidation was part of the Third Reich’s “beautifying project,” after all, to purge the mythical Germanic land from contamination, and in so doing remake the German state and sublimate the German people. Trump is engaged in the same triple blending: migrants are a (racial) threat to (pure, beautiful) Western civilization, which Trump will protect (beautiful, white) America from by building a Beautiful Tremendously Big Wall.

Trump has been shaped by similar cultural currents that propelled Hitler to power: he is a Romantic figure of myth, wielding Enlightenment tools of control, descended from regal heights to supposedly save white American civilization.

This commingling of aesthetics, politics and science wasn’t original to Hitler: he had simply inherited a 200-year-old cultural and historical legacy.

That legacy stretches back to the German Enlightenment. Its proponents believed that progress was attainable through education and science and that everything could be measured, controlled, and planned. One could master nature. There was an objective truth that could be discovered. There was the sense that Germany could move past the shame caused by the devastating Thirty Years’ War.

Romanticism emerged as a counter-movement, claiming that Enlightenment had disenchanted the world through science, technology, efficiency. Romantics preferred intuition, the unconscious, transcendence, the idea of free will, creative genius, irrationalism. They cherished Kant’s diktat, where a free man was one who obeyed the laws of his own making. They believed that to be “German” was to have a particular “ethnic soul” and that folk tales and songs would allow them to access it. They would elevate those tales into mythology. They subscribed to an idea of subjective truth: what mattered was what one believed to be true and the intensity of one’s dedication to these beliefs. They propounded that life was to be lived according to an aesthetic model of human development: the most creative Germans would be able to construct a world with their unfettered will while lesser, uncreative personalities would let themselves be used by the more powerful members of society, since they all shared the same essence and all tended towards one national project of self-realization.

Trump embodies mythology as white supremacists, growing in number and in power, value his sanctified Aryan blood: his presence conjures the return of European royalty.

Later, Nietzsche, believing the Romantics soft, called for an Übermensch, a superman who would fuse politics with aesthetics and rise above the herd through sheer will to power. His writings would be transmuted into Nazi ideology after his death; his aphorisms—“the weak and unsuccessful must perish,” “the courage to do what is forbidden”—would become mantras.

After World War I, Germany was left bankrupt and humiliated, a second catalyst of national shame. Hitler sought to reunify the country by dipping into this 200-year-old nationalist maelstrom. Take two centuries of aesthetic-political-cultural melding; add Enlightenment’s will to dominate, its view of nature to be moulded and used by man, its technology and systems of control; blend it with Romantic irrationalism, subjective truth, free will, “national essence” and an aesthetic model of human development; meld it with Nietzsche’s Übermensch, and pervasive anti-Semitism, and you have the entrails of the Third Reich.

Hitler needed an architecture to exemplify Third Reich ideals, German myth wasn’t enough. The country was lacking in prestige. There needed to be a greater origin myth for the Volksseele, so he turned to ancient Rome and Greece. When Alfred Ernst Rosenberg and Hitler claimed the Greeks as a “Nordic people” they were saying that the Greeks, Romans and Germans all belonged to a supreme Aryan race, from which Western civilization had descended. One of the most stupefying examples of this heritage mythos manifested as the Zeppelinfeld stadium, designed by the Third Reich’s architect of choice, Albert Speer. The stadium, which could hold about 340,000 people and which hosted the Nürnberg parades, was surrounded by 152 anti-aircraft searchlights that formed immense luminous pillars, a “cathedral of light.”

But architecture wasn’t enough to support the national myth. An ideology that rested on mythical blood and soil needed to purge impure blood. Giorgio Agamben writes that “in Western politics, bare life has the peculiar privilege of being that whose exclusion founds the city of men.” In Nazi Germany, bare life became a political principle. The massacre of the Jewish people became a political, aesthetic, and scientific principle.

The new age of Enlightenment in America—its fierce technological power, its systems of control, production, and consumption—has been waiting for a Romantic Übermensch to come along and repudiate its values of reason, science, and progress (values that are always declared but never maintained, whatever the epoch); a man who embodies Enlightenment domination—a neoliberal billionaire, a man set on the subjugation of humans and nature—who claims he is not a product of “the system.” America has been waiting for an irrational man who promotes irrationalism, who says “I will never tell you something I do not believe,” because what he believes supersedes truth.

Trump had attacked Obama before, using the Romantic tactic of mythology, claiming that the then-president was perhaps not American, perhaps not born on US soil. Trump’s tactic drew on the mythic “essence” of Romantic lore, coupled with American racism; specifically, the idea that Obama didn’t share the same “American essence” as everyone else, as a black man.

His mythologizing grew stronger the more he gained power. By 2016 he’d call for a return to “traditional,” regressive values, an “American heartland” branded and commodified in T-shirts and red caps. He continues to sway a white electorate with calls of an ethnic national identity. He embodies mythology as white supremacists, growing in number and in power, value his sanctified Aryan blood: his presence conjures the return of European royalty. They find meaning in the blend of aesthetics and scientifically inaccurate claims, which elevate them and the white European identity that they so cherish.

When I see them bearing tiki torches I don’t just think of the Klu Klux Klan, whose very name is derived from the Greek word for “circle,” another instance of European myth-making; I think of the Nazis, who brandished torches not just as a sign of power and cleansing by fire but also as a nod to the Prometheus myth, a recurring theme in Nazi ideology and iconography. Neo-Nazis today see Prometheus in Trump; a populist demigod bringing power to (white) people.

He is a lone figure with Nazi-Nietzschean messages: the only one who has “the courage to do what others won’t,” who brands morality and civic responsibility as “political correctness” that he does away with by the sheer force of his will. He is a president who believes himself to be an Übermensch remaking America, who believes America needs to be remade.

And he has appointed himself the defender of Western civilization, battling those “from the south or the east, that threaten … to erase the bonds of culture, faith, and tradition.” America won’t let those from “shithole countries” in, while Norwegians and those of beautiful Nordic descent are, of course, welcome. He has now hinted that he’d like to un-Americanize those born of immigrant parents: the Constitution prevents him from doing so, but this is a man who believes he can scribble all over it. If it were only up to him, “national essence” would be law again, signed by a man who sees himself—and is seen—as a mythical European white knight.

Ariel Saramandi is an Anglo-Mauritian writer and essayist. She is the editor-in-chief of Transect Mag and the fiction editor of the Bare Life Review. Her work has been published in Boulevard, Electric Literature, Cosmonauts Avenue and other places.

The Power of a Smalltown Bookstore: At Point Reyes Books 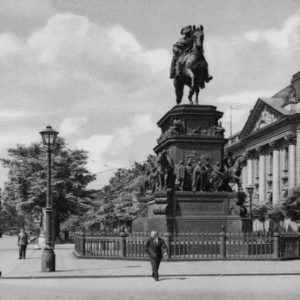 It was a quiet day this past August when I found the diary. I was back in Chapel Hill. I hadn’t been home in almost a year....
© LitHub
Back to top