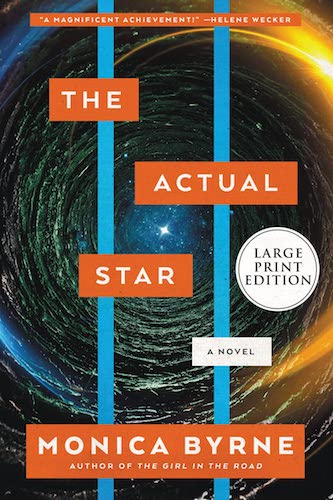 The following is from Monica Byrne's new novel The Actual Star. Byrne studied biochemistry at Wellesley, NASA, and MIT before pivoting to fiction and theater. She is the author of the novel The Girl in the Road, winner of the 2014 Otherwise Award, and loves a good thunderstorm.

On the riverbank in San Ignacio, Leah stood between two bridges, the low bridge and the high bridge, one wooden and one suspended, and watched the children stream away to school, like columns of soldiers to a holy war: the maroon-and-creams, the green-and-whites, the navy-and-blues. On both sides of the river, black birds creaked in the trees like rusty hinges, swooping back and forth in a game of Red Rover that had lasted for millions of years.

She felt she’d passed through many veils to arrive here. Yesterday, she’d woken in the freezing black of Anoong. Then she’d taken a taxi to St. Cloud State, a bus to the St. Paul airport, a plane to Houston, a plane to Belize, a taxi to the Belize City bus depot, and finally a bus to San Ignacio. She’d fallen asleep six times, having bright-colored dreams; every time she woke, she felt as if she were on a new planet. From the plane, Belize was a blue-green country marked by patches of sun, pillars of smoke, and rivers of mercury. On the tarmac, she drank in the air as if it were amniotic fluid. On the bus to San Ignacio, they passed through a veil of rain, and then the coastal plain swelled up into hill country. A little girl across the aisle offered her a jam roll. It crumbled in her mouth, all flour, the jam gone gummy from the sun.

She checked in to her guesthouse at midnight and ate a pack of plantain chips on her bed. Her pillow smelled like roses. She woke before dawn, too excited to sleep. She went to sit by her window and saw the bright morning star. It was so wonderfully warm, even at this hour. The mist turned pink-orange, the dogs began their call-and-response, and a man clopped past on horseback. She put on her green dress with bows on the straps and went down to the river.

Now she’d been walking up and down the bank for the last hour, watching the traffic on the low bridge. There were cars, jeeps, trucks, pickups, taxis, motorcycles, snack carts, green-and-yellow buses, glossy brown horses, and so many vans with decals: ultimate cayo tours. ceiba tree adventures. pacz adventure tours. xplore inland tours. maximum adventure tours. ancient cultural tours. river rat expeditions. There were young boys splashing under the bridge, and young girls wading in the water, with braids as black as her own, holding their skirts with balled fists. A caramel dog with a double row of teats ambled up to Leah, trustingly like a cow, head lowered. She caressed its head, wondering who owned it, where its collar and tags were. Maybe it belonged to the whole town, she thought.

She walked back along the riverbank, her flip-flops hooked on her fingers, breaking the dew with bare feet. She still marveled at the air, how rich and warm it was, with a mineral flavor of limestone. She felt like she could dissolve here, just melt away and expand, and become the space between all things, like the Holy Spirit. She knew she’d done right in coming here. Wholeness was somehow nearer, here.

Leah got hungry. She walked up from the riverbank and passed through the market grounds. A few stalls were open, selling oranges, tomatoes, carrots, eggs, pumpkin seeds, and plantain chips. Women were arranging bras and baby clothes on a pegged board. She walked to the center of town, smiling at everyone she passed, beholding them as if they were holy Byzantine icons fixed with eternal meaning. She walked past a grizzled old man with red leather skin and hard blue gems for eyes; he, noticing her stare, finally begrudged a nod in her direction. She thought that everyone in Belize would look like her, and many did, but many did not. They were every shade. She got choked up. The sidewalks were not smooth and featureless, like in Anoong; they were broken and tossed as if by earthquakes, with huge chunks missing or upthrust or caved in, and the new topography acted on her body, teaching her to pay attention. Minnesota now seemed as inconceivable as Belize had, two days before. She saw a tiny wooden sign that said pop’s diner on a side street, went in, sat down, and ordered breakfast, which seemed to arrive nearly as soon as she’d ordered it, a Picasso of a breakfast, with orange papaya keystones, eggs in brown lace, pillows of fried bread, thick fibrous bacon, and a pool of black beans quickly losing its shine.

Leah ate. Her forearms stuck to the table from the heat. She ran her finger along the sweat, delighted. She would never have to worry about being cold here. In the upper corner of the diner, there was a small TV framed in Christmas garlands, showing an episode of Animal Rescue. As she ate, Leah watched cases of (1) a cat with its leg cut off, (2) an owl caught in wire, and (3) a puppy covered with ticks, its gums grey. They were all taken care of. They all thrived in the end.

She paid and left. She wandered up the hill to look over the town, and watched while the last of the mist disappeared. It became hot and bright again—this caused her constant amazement, how bright it was here, how absolute the need for sunglasses, right away—it was the first thing she’d bought. Belize was blinding her. This was a good thing. It was going to be a good day, as good a day as she’d ever had in her life. She wondered again at the intensity of her happiness. She’d never known she could be this happy. As if this place, its warmth and humidity and salinity, was calibrated to that of her own blood, so that the feeling outside finally matched how she felt on the inside, and she could swim down the streets as easily as walk them. She’d expected to feel culture shock, but she felt the opposite—that Belize was far more normal than Minnesota; or, what was strange about it was precisely what made it familiar. Leah only wanted to eat Belizean food, learn Belizean history, speak Belizean languages. She began to hear music: a solemn twinning of horns and drums. She turned into one side street and then another, looking for the band, but the music always seemed to come from behind her rather than in front of her, and she got turned around and lost, and soon found she was back where she’d started. It sounded like a funeral march of some kind. She saw police in riot gear, practicing formations in a soccer field. She saw vultures folding over a dead dog in someone’s backyard. The dog was splayed in spectacular fashion: limbs outflung, teats exposed. A boy on a bike watched closely for her reaction. She made a sad face, and he nodded back, as if reassured. She entered a park, crunched across sun-toasted grass, and sat on a bench painted green and yellow. She listened. The phantom music petered out. Now there were just the sounds of cars, reggae, and children too young for school.

She’d been here for less than twenty-four hours. She felt like she’d been here a year. She was transformed, and all she’d had to do was get up and go. What if, she thought, travel itself could become a religion, where the rituals of wandering become the essence of the faith? Each node of the journey like the Stations of the Cross, performed and revered? Each person searching for that place on Earth where the outside matched their inside? And now she felt she was in her own promised land. Her guidebook said that all of western Belize was one continuous ancient Maya site. Her ancestors were beneath her. And deeper, and beneath them, were the caves. Xibalba itself was underfoot.

A pack of dogs trotted by, circled, and stopped. They’d been seen by another pack of dogs at the other end of the park, who were also circling. There are many soap operas going on here, thought Leah, among many species. “Soap opera” seemed the term that best fit: in Minnesota, everything was dull realism in black and white; here, everything was a bright fantasy in vivid color, with hot passions bubbling up over and over like the spurts of a volcano, cooled by sudden inkblot storms. She touched her braid. It was hot from the sun, like sheet metal. She thought, I am here. I am actually here.

Here’s the longlist for the 2021 National Book Award for Nonfiction. 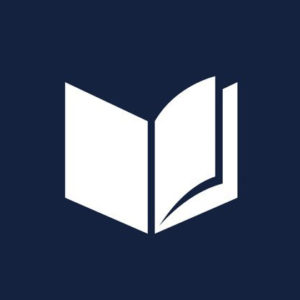