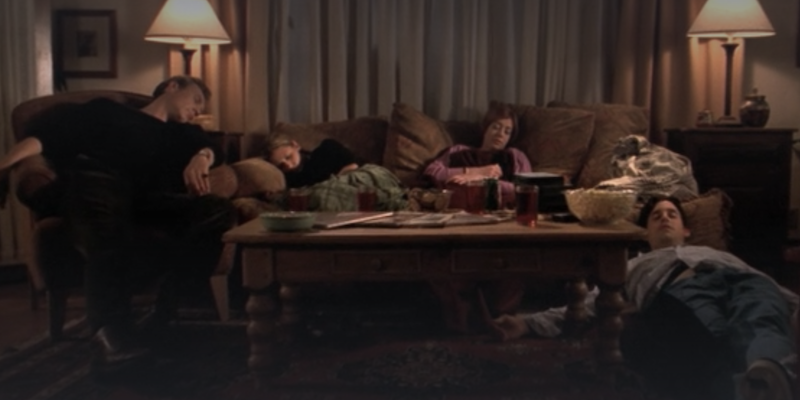 On May 23, 2000, fans of Buffy the Vampire Slayer tuned in for the finale of season four, expecting another huge production (the last season finale was the two-part “Graduation Day,” after all), though possibly confused as to how the show was going to manage it, considering things with Adam (ugh) and the Initiative (ugh) had been pretty well wrapped up the week before. The most observant viewers might have even gotten excited to see that Joss Whedon himself had directed the episode, something that is usually indicative of particular quality. But instead of a Typical Buffy Finale with Explosions, Revelations, and Catharsis, we got “Restless.”

Season four is probably the worst overall season of Buffy—except for the glory that is “Hush,” of course, though you could argue it’s cancelled out by the shameful “Beer Bad”; then again it does have “Something Blue” and “Pangs” and Willow and Tara falling in love, okay I take it back, there are no bad seasons of Buffy—and sure, its rank is down in large part to the awkward growing pains that seem to be unavoidable when television shows set in high school have gone on too long and have to send their characters to college, but it’s also down to Riley, otherwise known as Buffy’s Worst Boyfriend, and to Adam, who is withtout a doubt the lamest Big Bad of the series (please contact me for multiple rankings of the Buffy Big Bads based on scariness, sheer fun, and complexity, but trust that Adam is last in every metric), whom the Scoobies defeat with an equally lame Captain Planet-style attempt at convincing us that having friends is worth it even if you’re like a superhero or something. Also, while we’re on season four, we all know Oz would never do that to Willow, werewolf hormones or no.

Anyway: if you were describing “Restless” to me, I would think it was just as bad as Riley, a dork with no edge who can’t deal with the idea that his girlfriend might be stronger than him. It is, after all, a dream sequence episode. That’s right. You remember now. It should have been awful. And yet.

We begin with Buffy making sure that Riley knows she doesn’t even trust him to handle a debriefing by himself, but he goes off anyway, and the gang sits down with a big bowl of popcorn, some 7-Up, and a VHS copy of Apocalypse Now (“a gay romp, the feel good movie of whatever year it was”). Soon, they are all asleep, and then they begin to dReAm.

In the DVD commentary (yep, what) Whedon tells us that he wrote “Restless” as a sort of “nice coda” to what he described as “a very anarchic and upheavaly season—and yes, I know upheavaly isn’t a word—for all the characters, would be to just do a piece that commented on all of the forming characters that we’ve grown to know and love, and where they were in their lives, and what they felt about things and each other.” It does very ably show us how all of the characters see each other—Riley is a silly cowboy in Willow’s dream, Spike is a “sideshow freak” in Giles’, etc.

The first dream is Willow’s—she and Tara are (oh-so subtly) talking about finding the true name for Miss Kitty Fantastico, who is “not all grown yet” (like their relationship, you guys) as Willow paints one of Sappho’s love poems in Greek on Tara’s back. This is a gorgeous scene, all soft and strange. Willow goes to class, and turns out she is in a play she didn’t know about, and it’s time to perform. Classic dream shenanigans. Xander, on brand as always, makes a gross, sexist joke (“Sometimes I think about two women doing a spell, and then I do a spell by myself,” which Whedon admits was “a little bit of a cheat” because it took us out of Willow’s experience. “It just made me laugh when he said it, so I kept it in,” he tells us. You cheated to keep that in, Joss? Yikes) and then we’re backstage with the whole gang, all in different costumes. Then she searches for Tara via a long vaginal hallway of red curtain. Again, subtle. Later, a long knife will come slashing through it. (“I was being vaguely literal and sexual there,” Whedon tells us. We got it!) Then we get to see old, season one Willow, in her dorky clothes, which really warms the heart.

Next, Xander. Sigh. Of all of the very 90s and early 2000s Buffy elements, from the fashion to the technology to the overwhelming whiteness, Xander has perhaps aged the worst. He dreams about being seduced by Buffy’s mom (“The sexual dream about your friend’s mom—I’m sorry to say, it happens,” Whedon says. “It happens to most of us. I hope.”) who sometimes talks without moving her lips. He dreams about Spike being Giles’s protégé (and the tweed suit he will later wear in one of the best episodes of the show, when he thinks he’s actually Giles’s son). He dreams, of course, about being trapped in his parents basement, and about Tara and Willow making out, which Whedon refers to as “the longest lesbian kiss on TV” but is of course presented as being for a man’s benefit, and is also unseen—all we see is Xander’s reaction. (“This is Xander’s dream. So, what can I say? I make no apologies for this, this is how his mind works. The fact that he deals with most of the characters in the show sexually in some way or another is kind of a Xander thing. And in fact we comment on it when he refers to himself as a conquistador, because men are into conquest.”) This part, unfortunately, does not slap. But then Anya and Giles start telling Xander important information in French, which is a very accurate dream sequence, and then we get a re-enactment of a scene from Apocalypse Now with Principal Snyder as Kurtz, which is very funny even if it doesn’t quite redeem the rest.

In Giles’s dream, he can’t decide whether he should be Buffy’s father or her watcher or a rock star, I guess, and he sings some exposition that foreshadows the musical (actually it’s not exactly foreshadowing—Whedon says that it led to the musical because he had so much fun writing it.) Spike is in top form in Giles’s dream; I’ve always wanted a spinoff of them trapped on an island together somewhere. (England?) In the end he figures it all out but he gets scalped anyway. Typical.

Buffy’s turn. Tara is her dream guide (I read somewhere that it was supposed to be Angel, but David Boreanaz was busy), and she references both Buffy’s dream in the season three finale and “what’s to come,” i.e. Dawn. “Be back before Dawn”—so good. Joyce is living in the walls of the school. Buffy goes to the Initiative, where Riley and Adam are getting ready to take over the world and also make a pillow fort. Buffy fights the First Slayer, who has been trying to kill everyone because the Slayer is not supposed to have friends and cast those Captain Planet-y spells, but Buffy wins, and saves the day, as is her wont. The fact that the First Slayer is portrayed as this animalistic “primal force” and is also one of the very few black characters on the show (not to erase Kendra, Trick, the Woods, Forrest (ugh), Olivia, Rona, and oh right Ashanti, but that’s about it in seven seasons, yikes) feels . . . pretty icky in 2020, even considering the justifications that she was born in prehistoric Africa and was imbued with the spirit of a shadow demon against her will by a bunch of evil men. But Buffy’s dream foreshadows the growing importance of the history of the Slayer, and Buffy’s interest in where her power comes from and what it means, which will direct the course of the show to one degree or another for the rest of its run.

All four dreams include the cheese man. According to Whedon, the cheese man is meaningless. However, there are . . . other explanations. I personally don’t really have a take on the cheese man, except that his inclusion is exactly the kind of chaotic choice that should have tanked this episode but instead makes it iconic. I don’t know why.

I’ve made fun of several parts of this episode, I realize, but as a whole, it’s still hypnotizing, a Lynchian diversion that also gives us insight into all of our favorite characters (and also Xander), and also one of the best experiential portrayals of dreaming I’ve ever seen on screen. There are so many moving parts, so many hints and callbacks and points of interest, so much play with color and cinematography, that it’s really worth rewatching, despite what I’ll just gently describe as “the dated parts.” It shows how Buffy was trying to do something more than just be television. “I knew that a lot of people would be alienated by it, and not get it, quite frankly—or not want it if they did get it,” Whedon said. “But to me it was a great exercise, as great an exercise as “Hush,” in learning about how to write and what it means.” It’s also an exercise for the viewer—a reminder to pay attention to what is coming and what has been. This isn’t an episode you can half watch or play on your phone through and still get. You have to dream along with it.