Scary. But I was glad Twitter was on top of it. I toggled over to Twitter to change my password but I couldn’t log in. My account was no longer there. It had been taken over by someone going by the handle of @5ernando, who had poached my 11,400 followers and was spamming away. @5ernando’s convincing-looking bio says: “Graphic Designer. Photographer. Editor. Barber. Lyricist. Weeb. BLM.” With a cover shot of protesters in silhouette. BLM? Seriously, hacker bot? After this past year? Now I was pissed. And panicked. I searched for @robspillman but my account didn’t exist. Somehow @5ernando had not only taken my followers but had deleted my tweets. If you search for someone quoting or retweeting @robspillman it takes you to @5ernando. After eleven active years on Twitter, @robspillman was gone.

But Twitter employs an army of truth-seekers whose job it is to combat hackers, right? I wrote to Twitter and received an auto-response that they could not find my username and email. The fact that twelve hours ago they’d sent me two emails to the email address they said was now not on record, warning me of the hack of a username they now claimed not to recognize, didn’t exactly give me confidence. But good news about @robspillman, the auto-response said: “However, the @username and email address are currently free to use on a new Twitter account. Please note that @usernames are available on a first-come, first-served basis. Please do not respond to this email as replies will not be monitored.”

Okay… Since Twitter offers no phone support or live chat, only bots, I next tried reporting the issue under “user impersonation” with screenshots of my old account and @5ernando’s. Another auto-response: “We’ve investigated the account you reported, and have determined that it is not in violation.” Outright stealing someone’s account is not a violation? The robot message went on to say, “We understand this might be a frustrating outcome, but we appreciate your report, and hope you’ll let us know about other potential violations in the future. Please note that any documents you may have uploaded as part of this process will be deleted. Can you take a minute to rate your experience and complete a short survey? Overall, how satisfied are you with Twitter’s support?”

How about negative a million?

So I signed up with my old username and tweeted at @twittersupport with screenshots of my old account and @5ernando. No response. Perhaps because I now had no followers and was not worth acknowledging, not even by a bot.

Writing is a hard, lonely business in the best of times, and with lockdown, Twitter became a lifeline.

Like many writers, I have a hate/love relationship with Twitter. On the hate side there is the toxicity, the misogyny, the lack of nuance, the pile-ons, and fake outrage. On the love side is the aggregation of literary news, announcements, and events. As a writer and editor working across creative disciplines, I used Twitter as a tool to see what was bubbling up through our collective digital consciousness. Not just who is releasing what, but all the writers and artists who are able to take the crude Twitter tool and transcend it, writers like @rabihalamedine and @sashahemon. I also looked to it for news and calls to action, both virtually and physically. And, let me be honest, I was kept somewhat sane by accounts like @weratedogs, @catswheretheydontbelong, and the sustaining satire of @sarahcooper. Besides temporary relief from doomscrolling through pandemic and election news, I was mainly on Twitter to connect with my friends and creative colleagues.

Writing is a hard, lonely business in the best of times, and with lockdown, the crush of isolation became dramatically compounded. Twitter was a lifeline. I live a block from a major hospital in Brooklyn and in March, with lockdown, the world seemed to enter a kind of suspended animation. But on Twitter there was a sense of time, of possibility.

We all know the dangers of living through and for social media. Instead of being present, we think “that would be a good tweet,” or worse, “If I don’t tweet this concert out it’ll be like I wasn’t there.” And it is hard not to have your social media persona slide away from your authentic self. Twitter allows us to present a version of ourselves that we want others to see. For many writers, it is their book-tour persona—outgoing, positive, happy to talk to strangers. As opposed to their at-home persona—ragged, full of self-loathing and doubt, punctuated by brief moments of joy. However, I found that during the pandemic my social media persona pretty much aligned with who I think I am.

The two of us turned to Twitter to express fear, depression, election anxiety, climate-change anxiety, white-supremacy anxiety. This whole year social media has been a commons in which many of us have come together. In this virtual gathering space I have felt less alone knowing that others are experiencing similar emotions. Like many, I have been stuck through 2020 in flight-or-fight mode, barely able to create. I do, however, breathe in all the Tweets I see announcing some form of transcendence, anything that takes the raw horror of our time and transforms it into a moment of clarity or beauty or hope.

But Twitter is not a commons. Twitter is a publicly traded, faceless tech giant that made 1.5 billion dollars last year. Twitter accounts are commodities. They have value insofar as they can be targeted for advertisements. They have enough currency that hackers in Kuala Lumpur City find value in stealing accounts like mine in order to access my 11,400 followers.

So who am I now that I don’t exist on Twitter? (Or do, with just my old handle and no followers or history?)

The teaser for the film Alien is: “In space, no one can hear you scream.” I feel like I’ve been kicked out of the spaceship and am free-floating through the ether, the robots at the controls not stopping to pick up the ejected body. It is a digital-era existential crisis—if I am going through my day and no one on Twitter knows if I am alive or dead or angry or have a clever take on the latest literary beef, do I, in fact, actually exist?

With so much in flux and in danger—democracy, global health, the environment—Twitter felt like a stable ecosphere, where I had a stable, evolving home, one I’d steadily built since July, 2009. But this home was an illusion. The digital edifice could and was taken away with a quick, clever hack. Gone are all of my direct messages, the leads on what to read next, the reminder that Mary Oliver’s poem “Sometimes” is reason enough to keep living.

I’m fighting the feeling that nothing we do matters against the rising tide of fascism and state-sponsored greed. Hunkered down in Brooklyn, anxious every time I leave my place, I worry that I’ll never see my friends again, that we won’t be able to travel, to go to readings, to tell stories in person. Against this erasure, I felt real on Twitter. I know that sounds simplistic and naive, but with the world frozen in Pandemic Groundhog Day, where every day feels like the first day of lockdown, on Twitter I could be creative and hopeful through the rage, and by engaging, I felt like I was within a shared current of time. It was a space where we could all exist together, without masks, sharing what we love and hate, imagining a future.

During the pandemic, to send out a Tweet was to send out a little flare saying “I’m still here. I exist.” Twitter is fine with @5ernando existing, whoever he or they or it are. But not me. Now I don’t exist. Or I exist outside of the oxygen of Twitter.

Yet as Beckett says in The Unnamable: “You must go on. I can’t go on. I’ll go on.” Bruised, illusions dispelled, and with the help of literary Twitter, I’ll rebuild @robspillman from the ground up.

Rob Spillman is an editor at Broadcast from Pioneer Works. He co-founded and edited the seminal literary magazine Tin House, which published from 1999-2019. Tin House was the recipient of the inaugural CLMP Firecracker Award for Magazine of the Year in 2015. He is the recipient PEN/Nora Magid Award for Editing, the Vido Award, presented by VIDA, Women in Literary Arts, and the CLMP Energizer Award for Acts of Outstanding Literary Citizenship. His memoir, All Tomorrow’s Parties, was published by Grove Press in 2016. 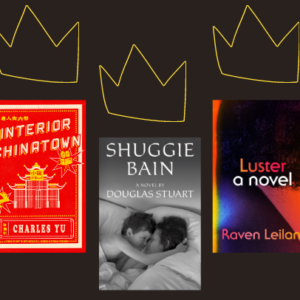 Spare a thought for the class of 2020. With most of the year's awards ceremonies being cancelled or moving online, there...
© LitHub
Back to top