Tennis: Good/Evil, Dread/Joy, All of Existence Within the Lines

As anyone who has failed to take a set from an older sibling instinctively knows, a tennis match is best allegorized as a struggle between good and evil. This intuition of thwarted children finds support in the origins of the sport. In his recently published novel Sudden Death, Álvaro Enrique explains tennis’ inherently symbolic nature:

Since it was a sport invented by Mediterranean monks, it had redemptive overtones: angels on one side, demons on the other. It was a matter of death and the afterlife, the ball as allegory of the soul flitting between good and evil, scheming to get into heaven; Lucifer’s messengers waylaying it.

No wonder the first literary account of tennis features a quarter of demons batting around the soul of “Pierre the Idiot,” a French seminarian: “Pierre remained conscious and felt the Satanic serves and returns in his flesh.” One small consolation for Poor Pierre: the soul-smacking devils were playing in the pre-graphite era.

Sudden Death is a brimming narrative; there are ghoulish objects (balls wound with hair from the decapitated Anne Boleyn), idiosyncratic cultural histories of tennis, fictionalized accounts of Cortez’s bloody conquest of the New World and exegeses of Counter-Reformation politics. But at the novel’s core is a play-by-play account of a pallacorda match between two hungover players: the notorious Milanese painter Caravaggio and a Spanish poet and statesman Francisco de Quevedo. (Pallacorda is a net-less forerunner of tennis in which players attempted to hit the ball into an opening called a dedans.)

Backed by a gang of ruffians and prostitutes whom he uses as models for his religious paintings, and with Galileo serving as his linesman, Caravaggio is the novel’s not-so-courtly hero. He represents vitality, fluidity and a grimy, sacred beauty in a world governed by inflexibility, zealotry, bigotry, and chauvinism. His opponent is at once the reactionary Quevedo—“the recalcitrant Catholic, the anti-Semite, the homophobe, the Spanish nationalist”—and history itself, in which empire, art and widespread violence are inextricably linked. One is beatable, the other is not.

The allegorical battle staged by the novel’s tennis match concerns competing aesthetic as well as moral visions. Looking at the “filthy fingernails—nails that are of this world, a part of history—of Caravaggio’s saints and virgins,” Enrique sees in the artist “someone who understood the true mystery of the forces that control how we inhabit the earth is not how lofty they are, but how elemental.” His pallacorda playing is likewise thrillingly imperfect, moments of inspired grace broken up by spells of volatility and distraction. Which is precisely, why, unlike his relentlessly consistent, unimaginative foe, the rough sinner Caravaggio is so saintly a player.

The same combat between good and evil, angels and devils, grace and malice applies, at least to some partisan viewers, to the rivalry between Roger Federer and Rafael Nadal. Unlike Nadal, Federer is supremely gifted both at tennis and at eliciting literary paeans to his game, of which William Skidelsky’s Federer and Me: A Story of Obsession, is the latest. A memoir-cum-appreciation, the book is most entertaining when casting Nadal as a demonic foil to the divinely gifted Federer.

A talented tennis player as a boy, Skidelsky turned away from the game partly because he disliked being the “sporty one” in his intellectual family. This desire to be a “serious, substantial” person led him to read history at Oxford, specializing in 12th-century Europe, which held as much interest for him as medieval shipbuilding techniques did for Kingley Amis’s Lucky Jim. Skidelsky, a literary journalist, first watches Federer play live in 2003, on Wimbledon’s Centre Court, and over the following years his appreciation, or “obsession,” revives his interest in tennis.

I put “obsession” in quotes because it’s not quite distinguishable from garden-variety fandom. To see his idol in action, Skidelsky does go to great lengths to secure expensive tickets from scalpers—“touts” as the Brits call them—or by camping overnight at Wimbledon, but so, I suspect, would any zealous fan. Indeed, his delight over the delicacies (raw minced pork) on offer at a small German grass-court tournament indicates that he is as obsessive a foodie as he is a Fedhead. Like a baseliner reluctantly coming in behind an approach shot, Skidelskly himself isn’t fully committed to the book’s premise: “I wouldn’t go so far as to say that my obsession with Federer saved me, but it has certainly brought me a tremendous amount of happiness.” Connoisseurship might bring happiness, but obsession doesn’t. Indeed, it is more likely to bring a visit from child protective services. Take one of the real obsessives we meet, Skidelsky’s hitting partner who serves his pregnant wife “the most powerful curry ever” to induce labor so that their son (Roger, naturally) will share a birthday with the Swiss legend.

Skidelsky may not be as creepily in thrall as some Fedheads, but his hatred of Nadal is admirably vigorous:

Like most diehard Federer fans, I loathe Rafael Nadal. I cannot stand the man or his tennis. In my more reflective moments, I am capable of admitting that this attitude falls short of perfect objectivity. Nadal, I am prepared to concede, may not be a wholly despicable human being. But no amount of ordinary decency can make up for the grave offense that he has committed, and continues to commit, simply by existing…

In high dudgeon, Skidelsky curses the chain of events that led to Nadal eventually dominating Federer: the “diabolical prescience” Nadal’s uncle showed in making the naturally right-handed Nadal transform himself into a leftie at the age of ten; choosing to focus on tennis rather than football at the age of twelve; and overcoming a potentially career-ending congenital foot condition with the help of a specially designed shoe. (I detected a hint of Skidelsky’s lingering resentment at Nike for having pulled off this “far-fetched-seeming solution.”) Skidelsky goes on to mercilessly mock Nadal’s “flagrantly OCD” behaviors, including the one “standing at the apex of his odiousness,” forcing his opponent, line judges, and millions of decent television viewers around the globe to watch him pick his wedgie before each serve.

How different from Federer, the man who “made tennis beautiful again.” His game is all sweetness and light, creative suppleness, while Nadal’s “is founded not on surprise or variation but on the principle of eternal repetition.” In his now famous profile on Federer, Foster Wallace wrote that “beauty is not the goal of competitive sports, but high-level sports are a prime venue for the expression of human beauty.” And beauty, as any Platonist will tell you, has a moral content, a close relationship with the good. Thus when Skidelsky claims that Federer’s forehand—Wallace described it as a “great liquid whip”—is “the most beautiful shot in the history of tennis,” he is at once rhapsodizing the shot’s “elegant discordance” and implicitly moralizing. This “uncoiling” forehand, in which “movement appears to be flowing rather than muscular,” honors the Platonic ideals of sport in a way that his rivals, less beautiful and good, don’t.

Then there’s Nadal’s forehand, a “monstrous spinning, dipping, rearing, kicking thing, a stroke that induces fear and panic in all who face it.” The Spaniard’s wedgie-pulling is merely risible, but Skidelsky is fundamentally outraged by the ugliness of Nadal’s game, and by ugliness I mean his devilish consistency, efficiency and brute strength. Returning to our allegorical theme, Skidelsky depicts Nadal as a demonic messenger devised by the gods to restore balance to the tennis universe:

…they sent down the one thing capable of stopping Federer—a bunglesome messenger of every crudifying technological development of the previous four decades, a player who, with one 4,000-rpm smote of his racket, could smash all of Federer’s artistry, his subtlety, to pieces. Nadal, one could say, was the price tennis had to pay for Federer’s genius.

Their once-frequent clashes certainly produced memorable moments, but by dethroning the king in the 2008 Wimbledon final, Nadal changed the genre of Federer’s career from the pastoral—reigning over the tennis world in serenity—to the tragic. Et in Arcadia ego. Ever since, argues Skidelsky, fans have mourned the loss of the “old Federer,” now merely a “memory, a chimerical presence.”

A tennis narrative with a more existential spin is Greg Jackson’s “Serve-and-Volley, Near Vichy,” a bewitching standout from his collection Prodigals. In the story, a tennis court becomes a cynosure exerting an almost occult power. The narrator is a thirty-something magazine writer who accompanies his girlfriend, a former pro tennis player, to the idyllic Auvergne estate of her married friends, also ex-tennis pros. The eccentric husband, Léon (Léo) Descoteaux, was once ranked in the top ten, but now forbids his children to play tennis and spends most of his time in a shed with a VHS camera. As one of his sons eerily explains, Léo acts so bizarrely because now out of the spotlight, he no longer believes he exists. One senses the ghost of Bishop Berkeley hovering over the story: Esse is percipi, “to be is to be perceived.”

The narrator, Daniel, is a fan of Léo’s, vividly recalling watching his greatest match on TV, a five-set loss in the semifinals of a grand slam:

I saw someone who moved with particular beauty or grace and the animal part of me responded… He was more skilled than his opponent but unable to compete with him physically… So what I was watching, I felt, was someone almost without peer confront exactly the limit of his ability.

Daniel, whose greatest thrill is having his relatives see his name in print, is thrilled by his proximity to Léo—a version of the attraction to his girlfriend’s own sporting excellence. Having lost his luggage, he dresses in Léo clothes; he is secretly pleased when the star hints that they have shared the same woman; and he gleefully consents to recreate, at Léo’s request, the latter’s five-set defeat while being filmed. The reenactment is a bestowal and an expulsion, Léo transferring to his guest what he can no longer endure. Taking instruction in how to hit each imaginary stroke, Daniel feels himself coming “alive”:

It’s a silly phrase, we are always alive, but this is how I felt. It had to do with Leo’s joy, I think, his excitement, his watching. I had never been watched like this and it was druglike, each movement attended so closely.

Again, esse is percipi, and to be perceived, even when imitating someone else, is dangerously intoxicating to Daniel. His girlfriend, having experienced, and learned to live without, the druglike effects of such attention, warns him not to watch the tape. One knows how often such warnings are heeded in fiction.

“It was beautiful,” Daniel says of the tape. That beauty exacts a price, but who’s to say the mediocre journalist isn’t right to choose to dwell in this fantasy of excellence, a witness to his own performance of the beautiful and the good that we fallen players, with out wonky shots and powder-puff second serves, could never replicate?

Matt Seidel is a freelance editor and staff writer for The Millions.
http://matthewseidel.com/

We Are All Sisyphus: On Following Soccer, and Family Rivalries 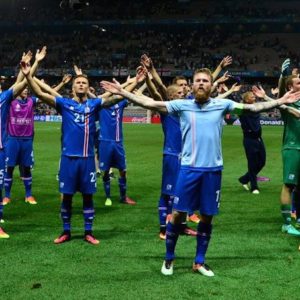 We Are All Sisyphus: On Following Soccer, and Family Rivalries

I come from a mixed-faith Manchester family: My grandfather bled United red. He raised three sons who all supported the Blues,...
© LitHub
Back to top