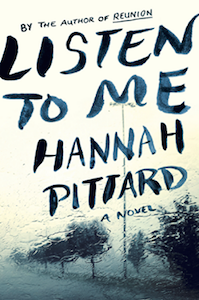 The following is from Hannah Pittard’s novel, Listen to Me. Hannah Pittard is the author of four novels. She is the winner of the 2006 Amanda Davis Highwire Fiction Award, a MacDowell Colony Fellow, and a consulting editor for Narrative Magazine. She teaches English at the University of Kentucky.

After the Indianapolis beltway, they stopped at the first gas station with green space. Mark had done as instructed and tuned in to the AM weather station. His father was right: there were alerts and advisories and warnings for everything east of Cincinnati. Blackouts had started. Towns off 64 were already being declared disaster zones. The storms had originated in the east and now were headed west. They were headed directly toward Mark and Maggie—that’s how she’d put it anyway, Mark wouldn’t be so histrionic—which meant US-35 would probably be black, too, by the time they crossed into Ohio.

Maggie proposed checking her computer, just to see the full extent of what they were getting themselves into. But Mark balked. They’d had a good stretch, the two of them. Where they were, the sun was still shining. Gerome had been quiet, Maggie had been sweet, and Mark had lucked into a miraculously uninterrupted set of the Stones and Petty. But then, pulling into the station, gassing up, Maggie had to go and suggest getting out the computer and researching the storm, as if what her phone could access wasn’t already enough. “There are probably pictures,” she’d said. “We could see what the devastation looks like.” It was her use of that word—devastation—that had immediately soured his mood. She sounded like one of those news anchors, delirious with the possibility of tragedy.

The thing was, the suggestion itself to get out the computer wasn’t half bad. They could have used it to look for hotels. If the situation was as dire as the broadcasts were saying, then it might have been nice to have a sure thing waiting for them when the storm came. But the quiver in Maggie’s voice had riled him with its intimation that their lives—their lives: Maggie’s and his—were somehow suddenly at risk. She’d gone and gotten desperate, illogical—“This could be bad. This could be Katrina bad. Sandy bad”—which had killed his driving buzz completely.

Nope. He wasn’t about to give in to the computer. He’d so far resisted bringing it into his classroom (to the ire of his colleagues), and he would resist, for as long as possible, bringing itinto every aspect of their lives.

A few years back, Mark’s father turned him on to some intriguing articles about server farms and data barns, articles suggesting that the move from paper to e-readers wasn’t nearly as green or eco-friendly as his and most other universities were insisting. Plus, the Internet’s energy consumption was something like ten billion watts of electricity in the United States alone, with another twenty billion in the rest of the world, which was equivalent to the output of something like thirty nuclear power plants, which—come on!—was a wholly mind-boggling statistic. Once a month or so, whenever Robert forwarded a new series of articles, Mark printed one or two of them out, made a couple dozen copies off campus (no way was he going to use his copy card and risk a lecture from the chair), and then posted them in the department hallways.

The point? Fuck the computer. How had they secured hotels in the past on road trips? The old-fashioned way: by stopping and asking if there was a room. “They probably don’t even have Wi-Fi here,” Mark said. “They have Wi-Fi everywhere,” she said. “How about this? After dinner we’ll find a hotel, and then you can knock yourself out all you want on that thing.”

Five minutes later, he was standing inside the gas station’s coffee shop/convenience mart, and he was watching Maggie walk Gerome. The two of them were going back and forth over a narrow strip of grass. Gerome wasn’t doing anything but sniffing. Maggie was talking to him—he could see from inside, see her lips moving—probably trying to coax him into lifting his leg. But Gerome was ignoring her. If he didn’t want to pee, he wasn’t going to. No amount of baby talk was going to change that.

Who was that woman out there? And what was the possibility that he’d actually spend his life with her? His whole life? Think about it: what were the actual odds? There were statistics on these sorts of things. If he wanted, he could probably walk down the hall to Sociology and get the exact and most-up-to-date numbers on his chances of staying married. Mark’s guess? The odds were against them. The odds probably said that they had another four, maybe five years together. Which was about how many years Gerome had left. But then, if that were the case, if that’s how he really felt, then why’d he marry her at all? And hadn’t they survived the first seven—okay, maybe not this most recent one, but the six before that and the three before marriage—hadn’t they survived those years in style, with class? She hadn’t cheated. Neither had he. He’d never even thought about it.

Okay, sure, fine, yes. There was Elizabeth, his former research assistant. But they hadn’t touched. Not once! Plus, she’d dropped out of the program last spring. Academia, she told him, wasn’t for her. And over the summer she’d moved to California, so it’s not as though they could have messed around even if they wanted to. But, fine—all things on the table?—there had been some emails, and those didn’t look good for anyone.

In the past, he’d made a point of checking his work correspondence only once a week. He even had a little caveat about it on his syllabus: Contrary to popular belief, professors do not, in fact, sit at their computers all day long waiting for the next student missive. If you e-mail me, it should be important. If you e-mail me, you should expect to wait at least one week before hearing back. Every Friday he went to campus specifically to check e-mail and catch up on student communication. It usually took four or five hours to sort through and respond, but he preferred losing one large block of time once a week to losing minnow-bite moments here and there every day. Imagine how quickly a day—a life!—could be subsumed by those moments if you let it. The thought made him itch.

But then, last fall, he’d gotten that first e-mail from Elizabeth: “If I called you devilishly handsome, would you mind? And if I told you that I think about you, what then?”

It was Elizabeth who’d first brought his attention to the group of online activists who called themselves Anonymous. She’d suggested it as the final chapter for his book, not that he was anywhere close to being finished. But the chapters were outlined, and Elizabeth, he suspected rightly, had said his history would be incomplete if it failed to address the future of anonymity. He’d been too myopic in his research, focusing almost entirely on pretenses that led to death—stonings, masked hangmen, firing squads, kill buttons on death row. He’d been looking down and back instead of up and out. It meant so much more research. It meant creating a new timeline and giving into a delayed deadline. It meant delving into a world of materials that existed entirely online. The irony didn’t elude him; his colleagues would chide him—“The luddite takes on the Internet,” they’d say when they caught wind—but Elizabeth was right. It wasn’t just Anonymous. It was Occupy. It was crowdsourcing. There was anonymity in inclusiveness, a “we” instead of an “I” that meant an end to ownership and the possibility of meaningful blame. Anyone was starting to feel very much like everyone. But Mark wasn’t there yet; wasn’t yet ready to draw the necessary conclusions or complete the larger argument. It was a process, one step at a time. The chapters needed to build on one another, and Elizabeth had taught him the importance of surprise, of the willingness to be surprised by what he found. It was essential that, while he might have a theory—a working theory—it not be set in stone until he was absolutely ready. She’d opened up a whole new approach. He’d have called her his muse if it wouldn’t have sounded so outrageous.

Before writing her back, he’d switched over from his professional account to his personal one. He avoided answering either of her questions directly, instead asking her about life after academia.

That was nearly nine months ago, just after the mugging. Now he checked his e-mail daily, whenever he was on campus and sometimes when he walked Gerome alone. He changed the passwords on both accounts so that it was no longer Maggie’s birthday: sign number one that he knew his back-and-forth with Elizabeth wasn’t on the up-and-up. Sign number two was that he sometimes thought of her, alone, in the shower, and one time during sex with Maggie. She, Elizabeth, came from a grossly conservative family in New England, and she was grossly conservative herself. But she made Mark laugh and she had this joie de vivre, this confidence that, perhaps because he knew it came from money, made him want to snatch her up and bend her over. But it was sign number three that really mattered, sign number three that told him in no uncertain terms that he was definitely crossing a line: if he’d caught wind of Maggie doing anything remotely similar: texting, e-mailing, straight-up flirting the way he’d been doing—he’d be furious.

He took another look at Maggie, at her long limbs and good posture—That’s my wife, goddamn it! Wife!—no, not furious: he’d be livid. And there it was.

Tennis: Good/Evil, Dread/Joy, All of Existence Within the Lines

Tennis: Good/Evil, Dread/Joy, All of Existence Within the Lines I. As anyone who has failed to take a set from an older sibling instinctively knows, a tennis match is best allegorized...
© LitHub
Back to top