Teow Lim Goh on Working Through the Rough Patches

I began reading Louise Glück’s poems around the time I handed in the final draft of my first book. Now I can see that the book was a culmination of a decade of work and obsession, but at the time, without the manuscript to anchor my thoughts, I felt adrift. I had to come down from the high of achieving what I had set out to do and had to face the blank page again. For a year, I plunged into another project, until I realized that I was rewriting my first book and that I did not yet have the depth and experience to give the new story the justice it deserved. For another year, I hardly wrote at all. I had a few real life adventures, but for the most part, I felt that I was waiting at my desk for words that would not arrive. Without my usual way of expressing what I saw and felt, it seemed to me that the world had lost its texture.

During this time, I kept returning to Glück’s essay collection, Proofs and Theories. The author of 16 poetry collections and a former US Poet Laureate, among many other honors, Glück writes in these essays that each time she finished a book, she fell into a period of “natural silence,” during which she did not write at all. This was most acute between her first two books, of which she says:

And it seemed at that time that, in my life, nothing was happening, or nothing with any power to change me… Nothing I read, nothing I saw or heard provoked response. And in the absence of response to the world, the act of writing, which had been, which is, the center of my life, the act or dream that suffuses life with meaning, had virtually stopped. For two years I wrote a little, three or four poems in all, and these seemed no more than treading water. For two years, I wrote nothing, not a word. It seemed increasingly impossible to remember a time when I had been fully alive, impossible to imagine a future in which I would live that way again.

These intervals of silence, she writes, “require a stoicism very much like courage; of these, no reader is aware.” In these words, I saw a well-regarded writer coming to terms with her artistic process and her own limitations, divulging the invisible struggles of the creative life.

Glück’s words gave me a way to understand what I was going through and reassured me that I was not alone in my despair. In the years before my book came out, I was writing frantically. I remember a week when I was working late at my job, late enough that the buses had stopped running and I had to take a cab home, and I still wrote into the night, trying to finish an essay I had promised an editor. Now I see that I was trying to race against time. I had believed, however irrationally, that there would be a moment beyond which my voice would be taken away from me and I would no longer be able to write.

In reading Glück’s essays, I also started thinking about ambition, drive, and tenacity. Ambition is the desire for success. But wanting is not enough. I have wanted to climb a fourteener—here in Colorado, this is a peak over 14,000 feet—but I have yet to put in any effort to accomplish it. And unless I start training for a marathon hike, this will remain an unrealized ambition. Drive is the will to achieve. It is a state of mind that propels you to act. In the years before my book came out, I had the drive to write. I made compromises in order to have the time and space to make my art. I did not push myself to climb mountains. I just put writing first.

The combination of ambition and drive, along with a lot of luck, can bring early successes such as a first book. Tenacity, however, is the grit to keep going when things get rough, and in particular, to get back to the hard, unglamorous work after you taste a modicum of success. In the past couple of years, as I flailed around and tried to find my writing feet again, I wondered, especially in my worst moments, if I should step away from writing and do something else. Now I see that beginnings, with their sense of possibility, are intoxicating. We live in a culture that eschews the long haul in favor of the glitter of the new. It is easier to keep starting again, always dabbling, than to commit to a path that leads to places you cannot yet see. I started a couple of new ventures—I call them distraction projects—but I also knew that my life’s work was writing.

Glück’s first book Firstborn is not my favorite. In fact, when I read it in her Collected Poems, I wondered if I could make it through 600 more pages of suspended sentences, overuse of ellipses, and inflexible manners. On the other hand, I keep going back to her second book The House on Marshland, which came out seven years after the first, for inspiration and reassurance that I can stay on this path I have chosen. I cannot speak for Glück’s experience, but as a reader, I see that something in her changed in those years of silence and endurance. There are still days when I want to quit, when I want the thrill of outward success over the invisible work, but I am learning to hold on and trust that I can find my way forward.

Teow Lim Goh is the author of Islanders (Conundrum Press, 2016), a volume of poems on the history of Chinese exclusion at the Angel Island Immigration Station. She lives in Denver.

We See What We Want: On the Ever-Widening Political Divide 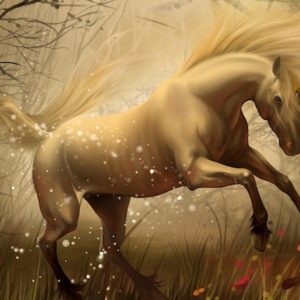 We See What We Want: On the Ever-Widening Political Divide

In the closing decades of the 13th century, as he traveled through the islands of Sumatra, Marco Polo declared to the world...
© LitHub
Back to top