As a therapist specializing in supporting transgender individuals, I am always looking for books to help my clients process their experience, become more comfortable with who they are, and develop their identity. As a reader excited by new and innovative means of storytelling and portrayal of self, I am always in search of books that show me new approaches to narrative and that inspire my capacity to know who I am. Rhea Ewing’s recent graphic novel Fine does both and is one of the best books I have read on gender in a long while.

Ten years in the making, Fine is part ethnographic study of trans experience, part elliptical autobiography of the author’s own experience building community and their trans identity, and part moving, exhilarating glimpses into lives that endlessly intrigue me. In order to create the book, Ewing spent years interviewing dozens of trans-identified subjects at various stages of coming out and transition, inhabiting various spaces on the gender spectrum.

Ewing then painstakingly tells the story of these interviewees through brief vignettes of two to three pages that, over the sweep of the entire book, give a sense of their unique personalities, approaches to gender, communities, and trans journeys. Ewing has arranged these vignettes into categories—among them masculine vs. feminine, hormones, race, relationships, and bathrooms—that structure their inquiry into trans identity and also map out their own progression as they came to understand themselves better and better.

Intrigued by the originality and depth of this project, I reached out to Ewing for an interview to learn more about who they were and the story behind the creation of Fine. What I found was someone who was preoccupied by the same questions that have consumed my own energies, as well as that of so many other trans people, as we make our gender journeys and figure out how to live more safely in this world. Ewing had turned that search for answers and community into an open-ended project of literary creation that only grew bigger and bigger the more they invested in it, eventually reaching a point not of completion but of constraint.

As trans people we are all asked to engage in an inquiry that is much too large for any of us to reasonably encompass.

“My original vision was to do a dozen or so interviews and make a little zine of 16 to 32 pages and that would be that. And as I got into it, I realized I needed to talk to more and more people, as I realized more voices were missing and more avenues needed to be explored. I reached a point where I became constrained by my own resources, and eventually I reached a stopping point in terms of what I could achieve.”

Talking with Ewing, I was surprised to learn that one of the aspects of the book that I found most compelling and most successful—the way Ewing lets themselves seep into the narrative as a character, until eventually we realized that Fine is a sort of autobiography by unconventional means—was not something they originally wanted and in fact had to be persuaded toward by their editor and agent. As Ewing explained to me, it was a matter of realizing that they would be present in the text whether or not they made that explicit, and learning to turn that inevitability into an opportunity.

“When I started writing Fine, I didn’t see my own story as interesting and I was aware of how much privilege I held. I didn’t want to contribute to the ongoing narrative of what kinds of trans person is centered; I preferred to remain behind the scenes.

My agent really challenged me on that in terms of how to make sense of the book’s structure, and that I was going to be present in the book whether I was upfront about that or not. Being more open and vulnerable to my audience, I hope, also brings the opportunity for the reader to get to know me as not this omniscient narrator but as someone who has my own thing going on with my own point of view and own focuses.”

As a reader and a therapist, it is this kind of candor around the author’s own biases and lack of answers that makes Fine work so well for me. As I construe it, as trans people we are all asked to engage in an inquiry that is much too large for any of us to reasonably encompass. We must declare to the world that some of the most basic things it has assumed about us—and that it has forced upon us—are wrong, and in correcting this we must explore enormous and very thorny questions that we lack sufficient information to answer to a satisfying degree.

“Seeing the book out there has been phenomenal. It’s been very affirming that I didn’t waste ten years of my life.”

We must do all of this while enduring sizable amounts of stigma, marginalization, and outright hatred, often struggling against the disapproval, misunderstanding, and sometimes purposeful mistreatment of our friends, family, government, and community. This is too much to ask anyone to take on, but as trans people we have no choice but to attempt it.

I greatly appreciate that Fine seems to acknowledge all of this, and its author has the vulnerability to show us that they themselves are engaged in this inquiry that is so much larger than any of us. This vulnerability helps us all to admit that, yes, we’re all doing the best we can with this crazy challenge that’s been thrown our way, and our best is the most that can be expected of any of us, even though so often the world tells us that it’s not nearly enough. Because we are enough.

This is what I see in the stories that Ewing chooses to share in Fine: this understanding that we can accept ourselves just as we are, and the compassion and generosity that comes along with saying so. As a trans person, Fine makes me sigh with relief, gives me the momentary grace to trust that my best effort is sufficient—which is a necessary thing in a world that so routinely tells me exactly the opposite. This is one of the things that makes reading Fine so calming and freeing, and is also one of the essential goods of having trans community.

In writing Fine, Ewing was pushing the boundaries in terms of how visible they dared be: this was a matter of building more trans community, as well as educating and empowering themselves, a story that is told with much authenticity throughout the pages of the book. This battle for safety and visibility is something that continued right up through the release of Fine, as Ewing had to contend with fears of a right-wing backlash similar to those that have been visited upon many other trans creators.

“I had multiple anxiety attacks about potential conservative backlash [to Fine] being dangerous to myself or loved ones, or people in the community having a backlash against things I may have ‘gotten wrong.’ Fortunately there hasn’t been any of that. There’s been fair and level-handed critiques that I agree with. I don’t think the conservative right-wing mob has gotten to the book yet—if it stays that way, I can deal with it. My hopes for it have come true, and my fears, none of that has happened.

“Trans creators in our current political climate can have the sense that it’s scary to put yourself out there, and it’s also worth it to be out there. The people doing this harassment—they only need to get a few visible cases, and that can do the work of silencing the rest of us.”

The question of how visible we can dare be is one that still occupies Ewng, as it does most trans people. As Ewing’s example demonstrates, there is huge importance to being visible—it lets us build community to support ourselves and each other—but this visibility also comes at a cost, as more and more anti-trans hate laws and terroristic organizations and social media accounts try to silence those of us who are visible.

In the end, the process of writing Fine has been a very important one for Ewing. Although the work could at times be isolating and depressing, it ultimately yielded understanding and community, as evidenced by the fact that Ewing’s wedding (which is depicted in the book) is attended by so many of the subjects that Ewing built relationships with along the way.

“Seeing the book out there has been pretty phenomenal. It’s been very affirming that I didn’t waste ten years of my life. It’s been humbling that I made something impactful. I’ve gotten messages of ‘hey, you’ve helped me come out’ or ‘this is the book I give people to help me understand my trans daughter better.’ It’s very moving to know I’ve brushed against these lives in this way.”

How Sergei Diaghilev and the Ballets Russes Revolutionized Dance 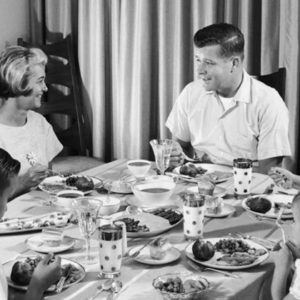