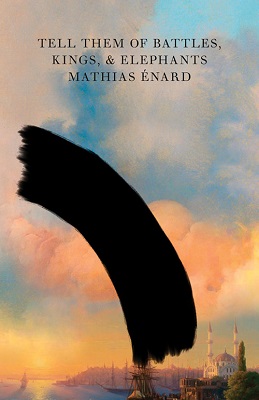 The following is from Mathias Énard's novel, Tell Them of Battles, Kings, and Elephants. the novel follows a young Michelangelo as he travels to Constantinople, where he has been invited by the Sultan to design a bridge over the Golden Horn. As he struggles to finish his masterwork, he becomes immersed in cloak-and-dagger palace intrigues. Mathias Énard is a writer and translator from Persian and Arabic. In 2015, he won the Prix Goncourt for his book Compass.

Night does not communicate with the day. It burns up in it. Night is carried to the stake at dawn. And its people along with it—the drinkers, the poets, the lovers. We are a people of the banished, of the condemned. I do not know you. I know your Turkish friend; he is one of ours. Little by little he is vanishing from the world, swallowed up by the shadows and their mirages; we are brothers. I don’t know what pain or what pleasure propelled him to us, to stardust, maybe opium, maybe wine, maybe love; maybe some obscure wound of the soul deep-hidden in the folds of memory.

You want to join us.

Your fear and confusion propel you into our arms; you want to nestle in there, but your tough body keeps clinging to its certainties; it pushes desire away, refuses to surrender.

I don’t blame you.

You live in another prison, a world of strength and bravery where you think you can be carried aloft in triumph; you think you can win the goodwill of the powerful, you seek glory and wealth. But when night falls, you tremble. You don’t drink, for you are afraid; you know that the burning sensation of alcohol plunges you into weakness, into an irresistible need to find caresses, a vanished tenderness, the lost world of childhood, gratification, the need to find peace when faced with the glistering uncertainty of darkness.

Little by little he is vanishing from the world, swallowed up by the shadows and their mirages; we are brothers. I don’t know what pain or what pleasure propelled him to us, to stardust, maybe opium, maybe wine, maybe love; maybe some obscure wound of the soul deep-hidden in the folds of memory.

You think you desire my beauty, the softness of my skin, the brilliance of my smile, the delicacy of my limbs, the crimson of my lips, but actually, what you want without realizing it is for your fears to disappear, for healing, union, return, oblivion. This power inside you devours you in solitude.

So you suffer, lost in an infinite twilight, one foot in day and the other in night.

Three bundles of sable and mink fur, one hundred and twelve panni of wool, nine rolls of Bergamo satin, the same quantity of gilt Florentine velvet, five barrels of saltpeter, two crates of mirrors, and one little jewelry box: that is the list of things that disembark with Michelangelo Buonarroti in the port of Constantinople on Thursday, May 13, 1506. Almost as soon as the frigate moors, the sculptor leaps ashore. He sways a little after six days of difficult sailing. No one knows the name of the Greek dragoman waiting for him, so we’ll call him Manuel; we do, however, know the name of the merchant accompanying him: Giovanni di Francesco Maringhi, a Florentine who has been living in Istanbul for five years now. The merchandise belongs to him. He is a friendly man, happy to meet this hero of the republic of Florence, the sculptor of David.

Of course Istanbul was very different then; it was known as Constantinople; Hagia Sophia sat enthroned alone without the Blue Mosque, the east bank of the Bosphorus was bare, the great bazaar was not yet that immense spiderweb where tourists from all over the world lose themselves so they can be devoured. The Empire was no longer Roman and not really the Empire; the city swayed between Ottomans, Greeks, Jews, and Latins; the Sultan was named Bayezid the second, nicknamed the Holy, the Pious, the Just. The Florentines and Venetians called him Bajazeto, the French Bajazet. He was a wise, tactful man who reigned for thirty-one years; he loved wine, poetry, and music; he didn’t turn his nose up at either men or women; he appreciated the arts and sciences, astronomy, architecture, the pleasures of war, swift horses, and sharp weapons. It is not known why he invited Michelangelo Buonarroti of the Buonarrotis of Florence to Istanbul, though certainly the sculptor was already enjoying great renown in Italy. Some saw him at the age of thirty-one as the greatest artist of the time. He was often compared to the immense Leonardo da Vinci, twenty years his senior.

That year Michelangelo left Rome on a sudden impulse, on Saturday April 17, the day before the laying of the first stone of the new Saint Peter’s Basilica. He had gone for the fifth day in a row to request that the Pope deign to honor his promise of additional money. He was turned away each time.

Michelangelo Buonarroti shivers in his wool coat; the spring is timid, rainy. He reaches the borders of the republic of Florence as the clock strikes 2 a.m., Ascanio Condivi, his biographer, tells us; he stops over at an inn thirty leagues from the city.

Knowing he is safe in Florentine territory, he turns away the attendants the Pope has sent after him with orders to bring him back to Rome, by force if necessary. He reaches Florence the next day in time for supper. His servant gives him a thin broth. Michelangelo curses the architect Bramante and the painter Raphael, those jealous types who, he thinks, have served him a bad turn with the Pope. Pontiff Julius Della Rovere is a proud man too. Proud, authoritarian, and a miser. The artist had to pay from his own pocket the cost of the marble that he went to pick out in Carrara to build the papal tomb, an immense monument that would sit enthroned right in the middle of the new basilica. Michelangelo sighs. The advance on the contract signed by the Pope had been spent on furs, travel, and apprentices to quarry the blocks.

The sculptor, exhausted by the journey and his troubles, a little warmed by the broth, shuts himself away in his narrow Renaissance bed and falls asleep sitting up, his back against a cushion, because he is afraid of the image of death the outstretched position suggests.

The next day, he waits for a message from the Pope. He trembles with rage when he thinks that the pontiff didn’t even deign to receive him on the day before his departure. Bramante the architect is an imbecile, and Raphael the painter a pretentious ass. Two dwarfs who flatter the outrageous haughtiness of the crimson-robed one. Then Sunday arrives and Michelangelo eats meat for the first time in two months, a delicious lamb, cooked by his neighbor the baker.

He draws all day, runs through three red chalks and two graphite pencils in no time at all.

The days pass, and Michelangelo begins to wonder if he has made a mistake. He is hesitant to write a letter to His Holiness. Get back into favor and go back to Rome. Never. In Florence, the statue of David has made him the hero of the city. He could accept the commissions they won’t fail to give him when they learn of his return, but that would unleash the fury of Julius, by whom he is employed. The idea of having to humiliate himself once more before the pontiff whips him into a frenzy.

He breaks two vases and a majolica plate.

Then, having calmed down, he begins drawing again, mainly anatomical studies.

Three days later, after vespers, writes Ascanio Condivi, he receives a visit from two Franciscan monks who arrive soaked from the pounding rain. The Arno has swollen a lot over the past few days; people are worried it will flood. The servant helps the monks dry off; Michelangelo observes the two men, their robes spotted with mud at the hem, their ankles bare, their calves thin.

“Maestro, we come to give you a message of the highest importance.”

“Through your brother’s directions, Maestro.”

“Here is a letter for you, Maestro. It is a singular request, coming from a very high personage.”

The letter is not stamped, but sealed in foreign characters. Michelangelo cannot help but feel disappointed when he sees that it does not come from the Pope. He puts the missive down on the table.

“It is an invitation from the Sultan of Constantinople, Maestro.”

We can imagine the artist’s surprise, his little eyes opening wide. The Sultan of Constantinople. The Great Turk. He turns the letter over in his hands. Vellum is one of the softest materials there is.

From Tell Them of Battles, Kings, and Elephants. Used with permission of New Directions Books. Copyright © 2010 by Mathias Énard. English translation copyright © 2018 by Charlotte Mandell.

Are There Lessons to Be Learned from the Protests of the 1960s? 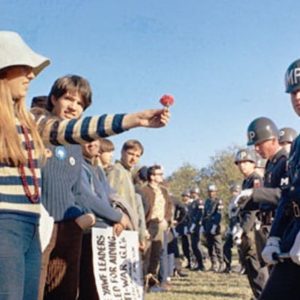 Are There Lessons to Be Learned from the Protests of the 1960s? Adam Nemett has spent the better part of a decade researching the history of student movements, civil disobedience, violent...
© LitHub
Back to top