When approaching a piece of literature, I frequently urge my students to do something rather intimate: “Try it on.” I then remind them that they’d never purchase clothes or shoes without first trying them on, and they then remind me that online shopping has turned my exhortation into something quaint and nostalgic. OK. But visualize those angled mirrors that still exist in clothing stores, whereby you see yourself not only in the front but also from the side and even in the back. You see your butt. (The mirror is indispensable: you can’t do this without it.) Books of literature are mirrors of this sort. They see “inside” their characters (we can’t), but they also see their characters in the round (also off-limits to our vision of ourselves and others).

And they often see into the “beyond,” a place where the individual can be lost or eclipsed. This can range from delivering an entire city rife with change, even alienation (as Baudelaire does for Paris and as Joyce does, in countless different modes, for Dublin in Ulysses), to imagined, fantasized voyages (such as the masochistic speculations of sexual betrayal generated by Proust’s jealous narrator or the Faulknerian one made, in Absalom, Absalom!, by two Harvard students in 1910 into a Confederate camp in 1864). Or the fictional voyages can be literal, such as the one on a raft on the Mississippi undertaken by a runaway white boy and an escaped black slave. Sometimes literature reprises actual historical documents, such as Melville’s narrative of the real sea captain Amasa Delano who encountered things on a Spanish slave ship that exploded his worldview entirely, while challenging ours.

Readers who have never been to Dublin or Harvard, or on a raft or slave ship, find themselves fellow travelers, and this strange readerly perch opens onto the truer mysteries, the ones involving ethical and spiritual transformation, confronting us with the shocking truths of art, reconfiguring—sometimes obliterating—the players themselves as well as the things we thought we knew. As said, the literary characters thrust into these larger realms can be transformed, undone, annihilated. But what happens to the reader who negotiates such landscapes? This would be literature’s knowledge.

The discussion sections in my courses used to take place in Brown’s science and engineering buildings, and for years there was a beguiling poster on one of the bulletin boards that spoke directly to my heart: it was a picture of a human brain (not a heart). This particular brain was figured like an automobile chassis, and it was outfitted with four spiffy wheels. The caption under the image read: “Take it out for a spin.” This is sage advice, and eminently more palatable than Socrates’s severe insistence that we know nothing, because it aligns with the outward voyage that all new learning generates inside us. In the past I chided my undergraduates, telling them that they seem willing to engage in the most strenuous physical exercises imaginable (such as I see in the huge, crowded gym rooms I walk past, with their shiny equipment and their sweating youths), whereas the exercise I am urging on them is different, at once cardiac and neural, but distinctly undisplayable by today’s electronic monitors, whether EKG or EEG.

Teaching is a vital generational compact, involving teachers and learners, hinging on the fact that books do not speak for themselves.

That brain-on-wheels, making its way through time and space, is unsurpassable as image, for it figures the very engine itself that is needed for the explorations and trips that lie ahead. Try it on! Strap yourself in! Far too long we’ve subscribed, in our schools, to a work ethos, drumming into our students the need to labor mightily, to strain with all their might—as if they were constipated—so as to absorb and ingest the materials we put their way. Have we missed the larks of it all?

Very often, today’s literature courses are courses of correction: how the author was either blind or ideologically at fault. And I know how much good can come from this. Of course, we need to know about the sins of the past and the present, and we need to see how tenacious old, encrusted beliefs can be. But we are nonetheless talking about literature. Writers and artists are not primarily trying to reform the world; their mission is to imagine it, to deliver it. Yes, there can be a profound ethical payload in such work, but it is rarely prescriptive or amenable to legislation. Works of literature do demand work, but, as I see it, of a different sort. What sort? The academy’s reply is often: rigor, objectivity, theory; those have their place and their value, but you won’t find very much of them in my classroom or in my book. In my crazier moments I think that rigor may be akin to rigor mortis. I am after other game: synthesis as well as analysis; connections that both bind and expand; even might-have-beens that never came to fruition but still live in the human heart.

But the tenor of the text, whether comic or tragic, whether declarative or subjunctive, does not alter the basic exchange in play. The umbilical cord linking teacher and text and student—with its implied imperative of nurturance, from the one to the other, of hallowing life’s basic needs—that compact, indeed that covenant, writes large the very rationale of school as institution. Teaching, as I’ve said, is a vital generational compact, involving teachers and learners, hinging on the fact that books do not speak for themselves. Teachers speak them, make them live, help convert them from dead letters to living script.

Good teaching, even when it proceeds via whisper or wink or ironic aside, opens doors, so as to blow you through them.

Dead letters. You recognize the words but you don’t get the meaning. Think about that. How much of your verbal world—books you’ve read, conversations you’ve had—consists in dead letters? Any honest tally would be immense. As my own mind starts to rot, I find this generic threat even more depressing than usual. We’re not far from Kafka’s frozen sea either, since the failure of communication is more often existential than merely lingual. Is there anything more miraculous than the unsimple event of words becoming alive, real? This entails more than some linguistic view of sign and referent; it is closer to magic, to the kinds of faith central to Pascal and Kierkegaard, when the language bridge works.

Education = to lead out. It’s a trip. These matters are vehicular. The teacher does more than guide or contextualize; he or she lights the fuse, explodes the dynamite, sees to it that it goes off, where it is meant to, in the minds of the students who are brought into this age-old contract between the word and the life. For too long, we’ve thought these matters to be docile and discreet, a quiet affair of language and pedagogy; but they can be eye-opening, heart-opening, as the ceaseless semiotic miracle takes place, and we discover how volatile these forces are, how inflammable they and we are. I’ve intentionally enlisted melodramatic, fiery language here, because good teaching, even when it proceeds via whisper or wink or ironic aside, opens doors, so as to blow you through them. 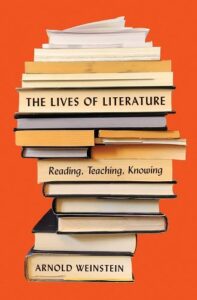 Arnold Weinstein is the Edna and Richard Salomon Distinguished Professor of Comparative Literature at Brown University. His recent books include Morning, Noon, and Night: Finding the Meaning of Life's Stages through Books and Northern Arts: The Breakthrough of Scandinavian Literature and Art, from Ibsen to Bergman (Princeton). He has also recorded five series of lectures on literature for The Teaching Company. He lives in Providence, Rhode Island.

Feeling Seen in Sort Of: On Queer Feelings and the Company of Others 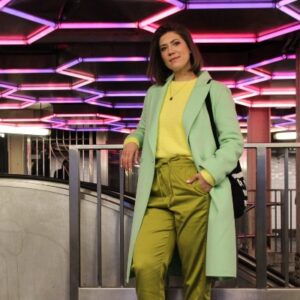 Deep beneath the asphalt streets of New York City lurks a breed of creature that’s haunted the subway’s subterranean...
© LitHub
Back to top
Loading Comments...