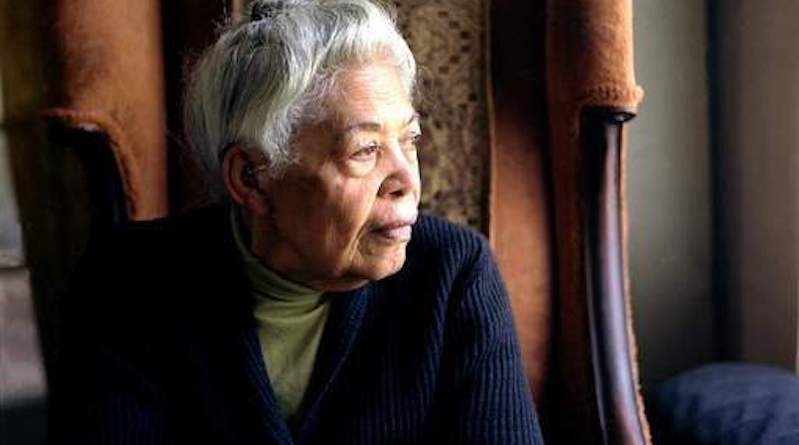 “Crossing the line between belles lettres and pulp, Petry is
a pioneer of the literary thriller.”

The Street is a groundbreaking work of American literature that is as relevant today as when it was published in 1946. When it won Ann Petry the Houghton Mifflin Prize for Debut Writers, the literary world was put on notice. Everyone agreed that the novel was brilliant, but, as is the case with staggering talents, difficult to classify. At this time, African American literature was tacitly understood to be African American male literature; and women’s literature was coded as white women’s literature. Further distinguishing Petry was the detail that she was a New Englander, yet didn’t write with the reserve we associate with authors from that region.

This is no novel of manners a la Dorothy West. Nor did she choose Walden Pond as her muse. Instead, Petry set her story in Harlem, but not the “New Negro” epicenter of racial uplift and progress. For Petry, 116th Street is the gritty antagonist, representing the intersection of racism, sexism, poverty, and human frailty.

I was fortunate to discover The Street as an undergraduate student at Spelman College, a historically black women’s college in Atlanta. The course was “Images of Women in Literature” and was taught by Dr. Gloria Wade Gayles, a charismatic, demanding, and feminist professor. The week before, we had read Native Son, and were dismayed by the depiction of Bessie, the only significant black woman character in this book that purportedly illuminated the “black experience” in the 1940s. A professor now myself, I understand that Dr. Gayles assigned Native Son before the The Street not because some critics considered The Street to be a women’s version of Native Son, but because after meeting Lutie Johnson in all of her riveting complexity, we would not have had patience for Native Son’s violent erasure of black women’s lives. (Also, seasoned profs assign the most exciting books at the end of term to motivate exhausted students to make it to the finish line.)

The beating heart of The Street is Lutie Johnson, a single mother of an eight-year-old son. A traditional woman at heart, she married her sweetheart, anticipating some hardships, but overall, she expected a happy and respectable life. However, reality intruded upon this dream. The union couldn’t withstand the everyday strains of marriage coupled with the financial challenges brought on by pernicious racism and the unique pressure of Lutie’s job as a maid. He cheats; she leaves. Down, but not out, Lutie remains inspired by Benjamin Franklin—she is convinced that “anybody could be rich if he wanted to and worked hard enough and figured it out carefully enough.”

In other words, Lutie is an American. However, she is a black American and these terms do not always mesh. Recently, I was in Washington, DC, with my friend, the novelist Jacqueline Woodson. We were on our way to a meeting with Michelle Obama, so questions of citizenship and belonging were heavy on our minds. We paused before a huge American flag, draped from a silver pole, watching a gaggle of white tourists pose for photos. Jacqueline suggested that I do the same. In the picture, I am smiling uneasily as the flag, nudged by the wind curls around my arm. Jacqueline said, “Doesn’t it seem like any picture of a black person and the American flag appears to be a protest?” I, studying the tiny photo of me surrounded by stars and stripes, agreed. “At the very least, the image is ironic.”

Lutie is an American. However, she is a black American and these terms do not always mesh.

Although The Street is a novel, print on pages, whenever I think of it, my mind is flooded with ironic images. Perhaps it goes back to my first encounter, during my undergraduate days. My copy of The Street was purchased from the college bookstore. The cover was all muted grayscale tones. A child hugged his mother’s legs. A classmate seated to my left held a vintage copy that portrayed Lutie as a buxom bombshell corseted into a red dress. In the years since, I have researched the many editions of The Street, both in the US and internationally, and I have been fascinated by the many depictions. The copy that I owned seemed determined to place the novel in the realm of serious literary fiction. The image of the child and mother speaks to a sober respectability. The red dress copy was more in the noir tradition of Raymond Chandler. A stark font announced “The Unforgettable Story of a Woman Beset by the Sin and the Violence of the City.”

Another edition shows Lutie, still reddressed, and captioned “The boldly shocking best-selling novel of a woman caught in the vice and violence of Harlem.” Another edition shows Lutie dressed in a 1980s skirt suit, as she rests her hands on the shoulders of her small son. She looks like she is a woman on her way to the office, pondering issues of work/life balance. The small print is acclaim from National Book Award winning author Gloria Naylor, praising Petry’s artistry. A mass market paperback shows Lutie decked out in in a turtleneck, trench coat, and leggings. The description, “She was a soul on ice in a brutal ghetto,” evokes Eldridge Cleaver’s iconic memoir of race and masculinity.

These conflicting images speak to the complexity of Lutie Johnson and The Street itself. Crossing the line between belles lettres and pulp, Ann Petry is a pioneer of the literary thriller, a genre popularized by her contemporary Patricia Highsmith. The Street embodies many of the conventions of crime fiction, as the novel is populated by a host of seedy characters. Boots Riley, the bouncer, is so slimy that you might have to employ hand sanitizer as you read. Junto, the night club owner, is so dastardly that he makes Boots seems like a gentleman. Jones, the building superintendent, sneaks into Lutie’s apartment and fondles her underwear. There is no comfort for Lutie in the friendship of women. The most generous person she meets is the madame next door. A whore with a heart of gold-plate, her offer to Lutie is an opportunity to be decently compensated for demeaning sex work.

This novel, like real life, is rife with seeming contradictions and layered with complex truths.

These juicy details are reflected in the trashy book covers and perhaps explain the incredible sales record. However, The Street is so much more than just a lurid tale, soaked in sex, violence, and suspense. Petry laces through the story shrewd social commentary about the relentless nature of poverty and its effect on black women in particular. She addresses stereotypes one by one and crushes them underfoot.

One treasured figure in the American myth is that of the mammy, the black domestic worker who cares for her employer’s family with duty and delight. Through Lutie, Petry asks the real cost of this arrangement to the women whose job it is to care for other people’s families. As a live-in maid, Lutie is only able to see her own husband and child a few days a month. Looking back, she feels like a fool. “She’s cleaned another woman’s house and looked after another woman’s child while her own marriage went to pot.”

Another feel-good belief cut down by this story is the myth of the strong black woman who makes a way out of no way, in a manner that is nearly effortless—the equivalent of the woman who, fueled by maternal adrenaline, can lift a car with one hand. A social worker marvels at all that Lutie is able to accomplish, but Lutie is not flattered. “It had been nothing but work, work, work—morning, noon, and night—making bread, washing clothes and ironing them. The investigator used to compliment her, ‘Mrs. Johnson, you do a wonderful job. The house and the children fairly shine.’ She had to bite her lips to keep from saying that that wasn’t half the story.”

Lutie may bite her lips and keep the other half of the story to herself, but Petry, thankfully does not.

Petry’s insight doesn’t end with Lutie. She delves into the psychology of all the characters, even Boots, the predator who pushes Lutie to her limit. Before he was a criminal, he was a Pullman Porter. The great labor organizer A. Philip Randolph immortalized this profession as one of great dignity and a triumph of American unionization. But Boots remembers the job with bitterness. He figures that he had “done all of the crawling one man can do in one lifetime,” summarizing his time as a porter as “saying ‘yes sir’ to every white bastard who had the price of a Pullman ticket.”

What hope, then, is there for Lutie Johnson, surrounded by people so beaten down by racism and poverty that they are willing to destroy one another for any scrap of comfort? Optimistic readers will assume that the relief will come from her relationship with her son Bub. (Remember, the un-sensational covers all depict Lutie as a mother, the most respectable of pursuits.) But not even Bub is spared. Lutie loves her son, but even love is no match for The Street. If love, not even maternal love, can’t conquer all, then why has this novel endured over so many years?

Behold, the transformative power of fiction. Petry does not spare us the devastating effects of poverty, but nor does she spare us the humanity of this cast of characters who sometimes behave inhumanely. Any writer could inspire us to open our hearts to poor Bub, eight years old and innocent. But it takes a brilliant storyteller to evoke sympathy for Boots, without excusing his dastardly deeds. When he gets what’s coming to him, we cheer, just as we weep for Lutie when she must face the consequences of her actions.

In other words, The Street is a novel that has it all. Like all the masters of noir, Petry looks into the abyss without falling in. This is a story that is dark, but not depressing. It is disturbing, yet intriguing. How can a novel’s social criticism be so unflinching and clear, yet its plot moves like a house on fire? How can characters flirt with type, while remaining singular and unforgettable?

These are questions for which there are no answers. I am tempted to describe Petry as a magician for the many ways that The Street amazes, but this description cheapens her talent. A magician’s tricks can all be unmasked if a person looks behind the curtain or probes the mysterious chest until she finally discovers the false bottom. Petry is a gifted artist. There are no stunts here or sleight of hand. This novel, like real life, is rife with seeming contradictions and layered with complex truths. And like the human experience this book is riddled with pain, but somehow powered by hope.

Tayari Jones is the author of four novels, including Silver Sparrow, The Untelling, and Leaving Atlanta. Jones holds degrees from Spelman College, Arizona State University, and the University of Iowa. She serves on the MFA faculty at Rutgers and blogs on writing at www.tayarijones.com/blog. She lives in Brooklyn. 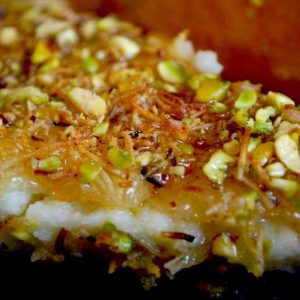 All the knafeh I have eaten over the last two months has melted into one textural memory in my mind: crisp, butter-soaked...
© LitHub
Back to top
Loading Comments...