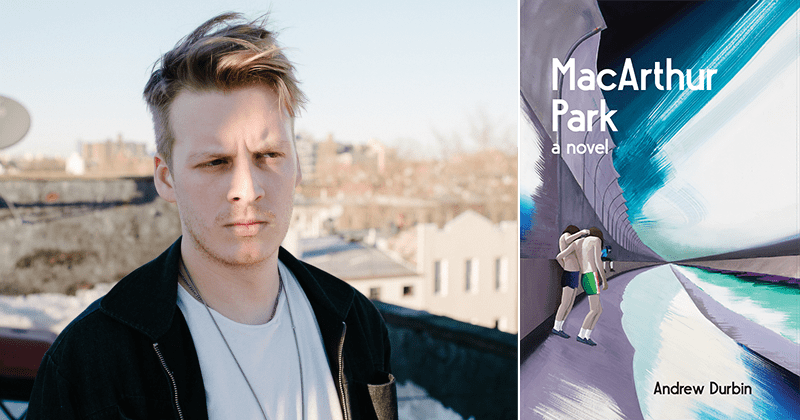 Talking Disco and the Disaster Imaginary with Andrew Durbin

Andrew Durbin writes prose with narcoleptic tendencies, his sentences like sleepers suddenly jerking awake. In his new novel, MacArthur Park, Durbin’s protagonist Nick Fowler, a young poet who occasionally writes about art and is also working on a book, is trying to recall the details of a hookup. He knows he made out with a boy to the backdrop of a rising sun; it might have been snowing. Durbin writes, “All winter I kept thinking that it was snowing, though it was often too warm to stick or seemingly too cold to snow, and so the silver-gray clouds, like the underbellies of fish, kept their close, mindful distance, always refusing to break out of their steady overhead stream into an event. The weather did not like to make itself understood.” But Durbin does. His character’s interiors are well-lit, even during blackouts.

The book Fowler is writing, loosely, throughout MacArthur Park, is about weather. At the onset of the novel, he survives Hurricane Sandy while housesitting for an art collector in New York City’s West Village. The relative privilege of his circumstance becomes a smudge on his memory; he no longer trusts how people, including himself, recall disaster. When asked at a dinner party about his writing, he remembers the “Untitled book thing” folder on his computer, where he postulates that his “sense of weather had enlarged to include the turbulent atmosphere of human events, the ways in which we face or avoid crisis, the ways we skid toward crisis, helplessly, together and alone.”

Together and alone are jarring modes of MacArthur Park, breaking down the sometimes intimidating integration of making art and making the party. Durbin’s writing doesn’t assume the position of being above any of his peripheral characters, except maybe as a drone, scanning their expressions for “the cheerful daze of a member of a cult.” A writer should write, he doesn’t exactly argue. He seems to understand when others make a case for “not-making-art,” but he just can’t help himself from expressing himself in writing. The proliferation of his words become an argument unto themselves.

Prolific seems like a good description for Durbin, who I meet at his apartment in Bed-Stuy on Labor Day. He’s readying for the release of his novel (he’s made “maybe 8,000 edits” to it since the galley I was sent), working on a monograph about the American artist Raymond Pettibon, editing a collection of the early fiction of Kevin Killian for Semiotext(e), and he’s at the beginning stages of writing what he calls a “comic novel.” John Ashbery passed away the day before we meet––Ashbery’s poem, “Drunk Americans,” appears in the final part of MacArthur Park––and Durbin tells me, “Without exaggerating, I became a writer because I read John Ashbery. Everything that he ever wrote showed me a way of thinking I’d never known possible.”

MacArthur Park also references, of course, the song of the same name. It was written by Jimmy Webb in 1968. The lyrics (“Someone left the cake out in the rain, I don’t think that I can take it”) have been critically panned since then––it was recorded by Richard Harris, then covered by country singer Waylon Jennings, before entering its disco afterlife when recorded by Donna Summer in 1978. It’s Summer’s version that becomes the object of Durbin’s attention:

I don’t think lyrics are vacuous, but an essential component of that liquid mode. Disco lyrics are one of several important access points into the song: repeated, they become a chant, one that lulls the dancer who sings them, who whispers them to herself as she moves, into the dreamy meditative state the music solicits. Via disco, Summer plays the song’s seriousness against itself, cribbing a strings arrangement from part of Harris’s original to set-up a sentimental expectation that she halts when she screams and the beat jumps up. Jump with it. This gesture is so gay, really.

Durbin, as Fowler, writes, “I have never been to the real MacArthur Park, though I’ve driven past it many times, and each time it’s seemed so open and bright under the California sun. Her depths must be somewhere else.” I ask him if this is true of his own life; if he’s devoted so much thought to this song, but never visited the physical place that inspired it. “I’ve never been,” he tells me. “Maybe I can’t ever go. At this point, it strikes me as perverse to visit, because I would almost be indulging myself. Maybe that’s overthinking it. Maybe I’ll go.”

The storm in the song “MacArthur Park” is strong enough to ruin a cake, and severe to the point that the whole park begins “melting in the dark.” The novel MacArthur Park contains an echo of this, beginning with Hurricane Sandy. It’s part of Durbin’s interest in chronicling but not contributing to what he calls a “disaster imaginary.” Originally from South Carolina, Durbin lived for a while in a post-Katrina New Orleans, and he’s interested in the dearth of fictive accounts of slower, ecological violence. He says Rob Nixon’s book, Slow Violence and the Environmentalism of the Poor, influenced his ideas about how to “think about that kind of violence when it resists representation” telling me, “I don’t think I’m creating a kind of fiction or poetics that does that job, that meets the kind of representational standards that Nixon would set, but I’m interested in the idea of those standards, and how they change, and how they shape our lives.”

Durbin was himself in New York during Hurricane Sandy, and what he observed was something he’s interested in measuring against a filmic account like John Cameron Mitchell’s Shortbus––where a blacked out New York became a site for “a new sense of community in the city.” He tells me that he remembers how a post-Sandy New York “brought to the surface a level of aggression and fear that I don’t think I had seen before. I remember, for example, all the people downtown couldn’t charge their phones, so they would go uptown, and all the cafes uptown were very upset that all these downtown people were coming up and using their outlets. It was so small and mundane, but that’s the first level community breaks down on.” MacArthur Park is coming out several weeks after, as The New Yorker’s Jia Tolentino wrote, “Disasters [have reminded] us that ambitious, difficult things are not just possible but necessary; in Houston, Harvey is already showing how an individualistic work ethic and a spirit of collective generosity can and have to coexist.”

Since then, Hurricane Irma, which formed on August 30th and dissipated on September 15th, was the most intensely observed Atlantic hurricane in a decade. As of MacArthur Park’s release date this week, the National Hurricane Center’s Atlantic Tropical Cyclones and Disturbances report includes Hurricane Jose, Hurricane Maria, Tropical Depression Norma, and Post-Tropical Cyclone Otis. Durbin’s novel also comes on the heels of author Jesmyn Ward’s Sing, Unburied, Sing, which has been heralded as a Faulkner-esque look at the consequences of American disasters. According to literary critic Parul Sehgal in The New York Times, Ward’s novel “combines aspects of the American road novel and the ghost story with a timely treatment of the long aftershocks of a hurricane and the opioid epidemic devouring rural America.”

Durbin and Ward both grapple with the specter of disaster and the observation of gradual violence towards life on our planet as it specifically occurs in America. Like Ward, Durbin prioritizes what Faulkner described in his 1950 Nobel speech as the “human heart in conflict with itself.” But Durbin is also interested in the Pynchon-esque, specifically Pynchon’s 1973 novel Gravity’s Rainbow, which he calls “endlessly funny and also damning.” When I ask Durbin what makes a great American novel, he responds, “A great American novel is that novel that is able to speak to its moment, while speaking to every other moment that came before it and after it. Perhaps any great American novel is a novel that is about violence.”

The final manuscript of MacArthur Park, set towards the end of Bloomberg’s 12-year mayoral term, was filed after the 2016 U.S. Presidential election. But Durbin says any mention of POTUS he tried to include ended up scrapped. He’s aware, though, that “the risks around a kind of nuclear arsenal are very different now than they were before.” The novel’s second part, set in Los Angeles, references urban theorist Mike Davis’s “fictional and filmic accounts of the annihilation of LA in the twentieth century,” nuclear weapons accounting for the most of these annihilations. Durbin writes, “Disaster films about LA (all great disaster films are about LA) are the entertainment that imagines a spectacular end to itself, a totalizing destruction not only of a place but of the medium, outsizing the US’s doomsy anxiety about its future in the post-war to include one of its most popular industries.”

In MacArthur Park, Durbin observes that “everyone wants to be an artist because everyone wants to speak about the now.” In writing a novel capacious enough to include city life after a storm, travels to art colonies that threaten to turn into cults, nuclear destruction, disorientation amongst the coordinates of modern gay hookup culture, and the obscuring of cultural production and cultural criticism, Durbin proves himself unafraid of writing about the present. The form in which he presents it––as the accrual of a person’s disparate and striking ideas coalescing into a novel, a love story even––makes me think of how Donna Summer sounds when she sings, “I’ll never have that recipe again.”

Thora Siemsen is a New York–based writer. She has written for Lenny Letter, OUT, Rookie, The Rumpus, and The Creative Independent. Find more work here. 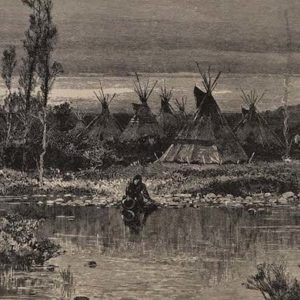 Chief Lean Bear was a member of the Council of Forty-Four, the governing body of the Cheyenne people. Council chiefs were...
© LitHub
Back to top