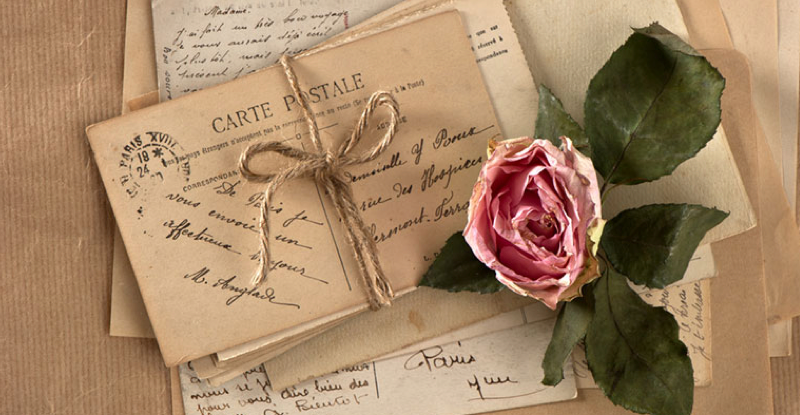 "No Heart-Emoji Could Ever Mean as Much"

The box arrived unexpectedly at my house. It was dark and heavy, with a flower carved into the wooden top. But the box itself didn’t matter. Like all treasure chests, what mattered was inside. Lifting the lid, I found a cache of letters my paternal grandparents had exchanged during World War II.

My cousin Meg had been given these letters when my grandmother died. Meg sent them to me when she heard that I was writing a novel set in the 1930s and that one of the characters was loosely based on my grandfather, an Irish immigrant who arrived in New York in 1929 with dreams of being an arranger for one of the era’s big bands. Throughout the war, my grandmother lived in Queens with a toddler—Meg’s father, my Uncle Rich—while my grandfather was stationed in upstate New York, New Jersey, Corpus Christi, and finally San Diego. I hoped the letters would help me pick up a helpful turn of phrase or two in my grandfather’s Irish-inflected English. Better still would be if my grandmother’s letters provided details for scenes taking shape in the novel: the buildings, buses, and subways of midtown Manhattan; the smell of the open-air markets in the Bowery; a visit to the World’s Fair, the Savoy Ballroom, or a rowdy Bronx wedding.

What I found instead was the day-to-day longing of two people who missed each other deeply, and who wondered how much longer they would be apart. My grandparents met in 1931 and were married six years later. They were eager to settle down, start a family, and make a go of life together in Depression-era New York. Shortly after their wedding, a doctor told my grandmother that she would never have children: this was a heavy blow to the happy life they imagined. So when Richard arrived, they were overjoyed—finally, life could begin. Then came the war, and my grandfather was drafted to fight for his new homeland. Despite their worst fears (the Marine Corps, the Pacific Theater), my grandfather’s age, marital status, and fatherhood kept him out of the most harrowing deployments. Still, for the next few years, their marriage would be negotiated through the mail.

The letters were in two piles. One was a loosely organized jumble of letters and postcards sent by my grandfather. The other pile was neatly stacked and bound with a thin pink ribbon. These were Nana’s letters to him. On the last page of each letter was the imprint of my grandmother’s lipsticked kiss.

The lipstick was physical proof that this same page that I held had been touched, even kissed, by my grandmother, who died in 2006. But even more startling to me was the sight of the first line of the letter. Nana’s handwriting in the 1940s was the same elegant script that signed the birthday cards she sent me every year until she died, always accompanied by a check for five dollars. The cards stopped the year before she died, but seeing the swoops and whorls of each word made her suddenly present in my life. These letters could have been written and sent only days ago.

What did I learn about them from their letters? I already knew they were devoutly Catholic—wherever he was stationed, my grandfather attended Mass every morning—but I quickly saw just how passionately, earthily devoted to each other they were. When my grandmother worried that he would run around with women in California, my grandfather pledged over and over that he was a one-woman man. More than that, he swore her that a certain part of him was reserved only for her. In the raciest parts of the letters, he ached to be with her, and the arc of his longing built to a, well, climax in the early days of 1945. In January, my grandfather wrote to say he had been granted a leave that gave him just enough time to dash across the country by train, spend 10 days with my grandmother, and then return to San Diego. He told her to rest up for his visit, and to be prepared for “plenty of loving.” In another letter, Nana tells him, “save your energy. You’ll need it when you get home”—and it’s clear that she has a lot more than household chores on her mind.

“The cards stopped the year before my grandmother died, but seeing the swoops and whorls of each word made her suddenly present in my life.”

So I also learned the exact window during which my father was conceived. More than I wanted to know, but typical of the letters: pages and pages of who Papa saw at church or his worries about an upcoming next parachute riggers’ exam, followed by sudden flashes of wartime sexting.

I can only imagine how my grandparents, somewhere in the great beyond, would react to their grandson reading their mail. My grandmother was a woman who cared deeply about propriety, and who never let me forget that at 12, I forgot to wear a suit jacket to my uncle’s wedding—a wedding which occurred on a 90-degree day in June (my cousin Meg, also 12 at the time, got an earful about not wearing pantyhose to same wedding). Years later, when my younger brother failed to answer a five-dollar birthday check with a timely thank you note, she told him, “If it wasn’t for the canceled checks, I’d think you were dead.” Papa died when I was 10 years old, and I know him mostly through stories and color-photos of him playing banjo at Thanksgiving and birthday parties. Still, I have a feeling that he’s shaking a fist and complaining that—Jesus, Mary & Joseph!—those letters were for her eyes only.

Some of my grandparents’ letters stretch over four, five, or six pages. Expressions of love are scattered throughout—“only God knows how lonesome and sad I am without you,” Nana writes—and then come in a torrent in the final paragraph. But the bulk of the letters are devoted to the quotidian aspects of their days: “Johnny painted the kitchen and bathroom a pretty shade of blue,” “We were at Peg’s yesterday for lunch and Mom’s for dinner,” “Peg is going to buy a new coat.” My grandfather writes about the long train ride from Corpus Christi to San Diego, which he spent in the club car with other uniformed musicians and an Army captain with a fine Irish tenor. In another letter, he describes his first sight of the Pacific Ocean, and imagines a day when they can see it together. All of this reinforced how desperate they were to share their everyday life with each other. The war had robbed them of many passionate nights, but it had also stolen the simple comfort of proximity, and even the pleasant boredom of being together with nothing particularly important to do. With every line they wrote, they knit themselves back into each other’s day-to-day existence.

I went to the letters looking for information, but what I found was two people who didn’t yet know how their story would end. I knew them only as Nana and Papa, but long before that they were Helen and Pete, and the only name they had for each other was Darling. My grandparents’ letters allowed me to eavesdrop on their lives, to hear their voices, sense their longing, and watch the way Nana’s mind skipped from a night at the movies (“Since You Went Away—what a tear-jerker!”) to a heartfelt wish to be together (“It is such a consolation to know that our love is eternal”). In the middle of another letter, my grandfather breaks off from a declaration of his undying love—“you are the first and the last”—to apologize for his uncharacteristically sloppy writing: “I’m using one of those USO pens and I’m having a hard time trying to handle it!”

Would any of these connections—of my grandparents to each other, of me to them—have been lost if, instead of handwritten letters, my grandparents had left behind a pile of emails? After all, millions of emails have been sent from family members in the United States to soldiers stationed in Afghanistan, Iraq, and other points around the globe over the past 15 years, many with the same intent as my grandparents’ letters: to say, this happened today, or I miss you, or I want you to come home. Does Helvetica mask the feelings embedded in these messages?

Theory-minded friends would say I have succumbed to what Walter Benjamin called the aura—the significance given to the one-of-a-kind, handmade artifact marked by its own journey through time. If that’s true, then so be it. The aura—the magic—that surrounds these letters is the evidence they give of Helen and Pete’s own hands, and the ways they suggest the feelings that guided those hands in the moment of the letters’ creation—lonely on a train outside Chicago, lazily ticking through another day on the base, or hastily jotting a last “I love you” before sealing the envelope.

And those kisses! Those were my grandmother’s lips, the lips my grandfather had to wait months to kiss. No heart-emoji could ever mean as much.

Last summer, two of my children went to a sleepaway camp with a strict no-phones, no-technology policy. The only contact my wife and I had with them for the first three weeks was via letters. An email home would have conveyed the same information—taco night was a hit, our son was developing a serious D&D habit, our daughter was cast in the camp musical. But I know already that this handwriting of theirs is a marker of a specific time in their lives. This is how they write and think now, and in a few years time it will be evidence of how they once were, when their hands were smaller and the world was just opening up to them. Of course those letters went into a box, and someday, somebody—our children, their children—will open the envelopes, unfold the letters, and discover the people in there, waiting to be known.

Brendan Matthews’ novel The World of Tomorrow is available now from Little, Brown and Company.

Brendan Mathews is the author of The World of Tomorrow (Little, Brown & Co.), which was longlisted for the Center for Fiction First Novel Prize and named an Indie Next Great Read and an Editors' Choice by the New York Times Book Review. Little, Brown and Company has just published his debut story collection, This Is Not A Love Song. He lives in western Massachusetts with his wife and their four children. 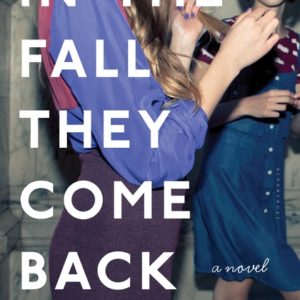 Except for what happened with little George Meeker, my first year in the classroom went rather smoothly. In fact, I think...
© LitHub
Back to top