Systemic Cruelty, Mass Sadism, and Reading “The Lottery” in 2017

“The morning of June 27th was clear and sunny, with the fresh warmth of a full-summer day; the flowers were blossoming profusely and the grass was richly green.” So begins the most famous and widely anthologized of Shirley Jackson’s short stories, “The Lottery.” (the story’s date was chosen to correspond with its 1948 publication in The New Yorker). That June 27th sounds rather like this June 27th (full-summer, profuse blossoming, etc.) at least from where I’m sitting. But unfortunately, the comparison doesn’t stop at the weather.

There are many ways to read “The Lottery.” Jackson herself famously refused to give her editors at The New Yorker an explanation for the text, even when the story received record letters and phone calls, many from readers horrified and desperate to understand the story’s meaning. “It’s just a story I wrote,” she said. The standard response that The New Yorker‘s Kip Orr sent to letter-writers was only slightly less vague: “Miss Jackson’s story can be interpreted in half a dozen different ways. It’s just a fable . . . She has chosen a nameless little village to show, in microcosm, how the forces of belligerence, persecution, and vindictiveness are, in mankind, endless and traditional and that their targets are chosen without reason.”

The story’s essential open-endedness, of course, is one of the reasons that it has become so famous. Its themes are indeed universal, and while it’s clearly an allegory for something, the specifics of that something are unclear, and have thus become a juicy topic for debate in English classrooms and around dinner tables (depending, I suppose, on the dinner table). There are no perfect parallels. I don’t want to force a facile interpretation. But reading the story today, almost 70 years after its publication, it’s hard not to read it as a parable of systematic cruelty under the guise of civic decorum and knee-jerk adherence to “traditional” values—which, one might argue, is the entire Republican platform these days.

On reread, one thing I find striking in the story is the good humor of the townspeople as they assemble to ritually murder one of their own. How can they be joking and chatting with one another, I wonder? Well, of course it’s simple: they don’t really think it’s going to be them who will be stoned to death. (After all, what are the chances?) It’s so easy to participate in systemic cruelty when you think it doesn’t actually touch you. For instance: do the Senators willing to vote for this draconian “health” bill imagine that they will ever be in a position where they might lose their health coverage? Same principle applies to all kinds of racism, sexism, homophobia, transphobia, and other modes of discrimination. It’s tempting to ignore these things when you’re sure it won’t be you who gets stoned to death in the town square. But the truth is that no one is exempt—the system that crushes one will crush all. Anyone can be chosen for the lottery.

It’s also hard, reading this story today, not to pay extra attention to Old Man Warner, a survivor of many lotteries, who bitterly rejects reform and complains that “It’s not the way it used to be . . . People ain’t the way they used to be.” This is one of those perennial complaints you hear from Republicans and other varieties of social conservatives. It’s even echoed in their leader’s slogan: Make America Great Again. That is, Make It The Way It Used to Be, whatever imaginary way that was. When no one complained on Twitter about the senseless systematic violence perpetrated against innocents, or challenged white supremacy, or insisted that women were also people, I guess. “You will not replace us,” chanted Richard Spencer and his gang of torchbearers. I have no trouble imagining Old Man Warner among them.

In Jackson’s lecture “Biography of a Story,” posthumously published in Come Along With Me, she writes about the many letters she received after the publication of “The Lottery,” and includes a few samples—some of these are quite funny, but many give me pause. One letter-writer from Texas asked, “What I would like to know, if you don’t mind enlightening me, is in what part of the United States this organized, apparently legal lynching is practiced? Could it be that in New England or in equally enlightened regions, mass sadism is still part and parcel of the ordinary citizen’s life?”

Well, as it turns out: yes. All right, perhaps not because of annual stonings—that I know of. Instead, we have a police force that repeatedly guns down black Americans. We have a new president who discriminates against entrants to the country based on their religion, and whose ascension brought with it a surge in hate crimes and demonstrations from overtly racist groups. We now have the aforementioned Senate health bill on the table, a cruel, bizarre piece of legislation which threatens to strip essential health care from our most vulnerable citizens—like those with chronic illnesses, those struggling with addiction or mental health problems, the poor, the elderly, even premature babies and their families—and will certainly be deadly for many of them. (“Simply put,” President Obama wrote last week, “if there’s a chance you might get sick, get old, or start a family—this bill will do you harm. And small tweaks over the course of the next couple weeks, under the guise of making these bills easier to stomach, cannot change the fundamental meanness at the core of this legislation.”) If these things aren’t evidence of mass sadism, I don’t know what is. And if they’re not part and parcel of your everyday life, you aren’t paying enough attention.

The question then becomes: does a story like “The Lottery” have any chance of making us pay more attention? Can it fight against the forces that cause large groups of people to cling to outmoded beliefs out of fear and ignorance? In an interview conducted last October, Shirley Jackson’s grandson, Miles Hyman—who recently published a graphic novel adaptation of “The Lottery”—thinks so. He explained that the story has special relevance during “a political environment so laced with those old toxic emotions: fear and hatred.” He went on:

You could argue that “The Lottery” has only one hero: the reader. The story’s ultimate goal is perhaps to “shock us awake,” so that we might be moved to act differently the next time we’re confronted with stale ideas that perpetuate senseless cruelty, bigotry or injustice. If anything positive should come from the harrowing spectacle of watching our political discourse degenerate into reality TV, perhaps the current election cycle—like the reading of my grandmother’s dystopic tale of horror—might just shock us awake as a nation, encouraging us to move together beyond this dark and ugly place we seem to be in.

Well, we haven’t gotten out yet. But I can say that I do feel slightly more awake today, more attuned to the dangers of the world. Maybe it’s not enough to change anything, but every little bit counts. 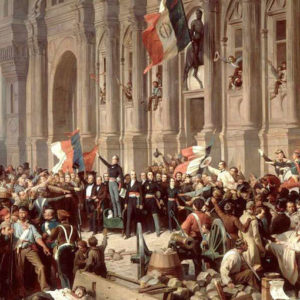 In the 1960s, some years after the publication of her book On Revolution, Hannah Arendt lived in a world of revolutionary...
© LitHub
Back to top