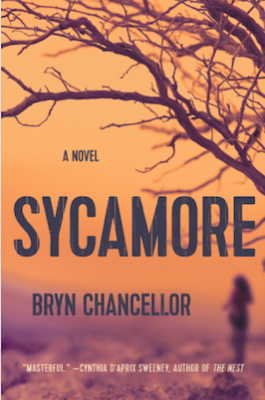 The following is from Bryn Chancellor’s novel, Sycamore. Out for a hike one scorching afternoon, a newcomer to town stumbles across what appear to be human remains embedded in the wall of a dry desert ravine. Bryn Chancellor’s story collection When Are You Coming Home? won the 2014 Prairie Schooner Book Prize, and her short fiction has appeared in Gulf Coast, Blackbird, Colorado Review, Crazyhorse, Phoebe, and elsewhere.

It was after five by the time Maud swung her sedan into the driveway, a bag from the Patty Melt and her lunchbox with the letter tucked inside on the passenger seat. Her wet shoes squeaked on the brake. The sky had waited to unhinge until after she finished her route, a swift, furious deluge that flooded the station’s parking lot while she wrapped up her tasks for the day. The storm had let up, and the streets were nearly dry again as the water soaked into the parched earth, seeping into the aquifers below.

She turned off the engine and sat listening to the rain spatter on the hood, watching the steam curl up. The square stucco house looked the same as when she’d bought it in 1991. For years, her parents had wanted her to move home to Phoenix—Come home, Maudly. Honey, come home—but Maud stayed in Sycamore. In the same house. Same address, 825 Roadrunner Lane. Same phone number. Same good old car, now pushing 200,000 miles, thanks to Angie’s miracle working. She’d repainted the house, but in the same Navajo White. When the jacaranda near the breezeway died, she had planted another one. For better or worse, this was home. She could stay here and wait. She could do that much.

She climbed out, her shoes squishing on the driveway. At the mailbox, she held her breath as she pulled down the little metal door: bills, an ad mailer, nothing else.

Inside, Maud kicked off her soaked shoes and socks and changed into jeans, a T–shirt, and flip–flops, and then put the kettle on to boil. She ate her hamburger standing over the sink and then scarfed three of Esther’s cinnamon swirl bites. Sipping her soda, she unpacked her lunchbox and held the letter over the kettle’s steam until the flap lifted. Then she took the letter to Jess’s room. Maud had left the room the same for a while. Around year six, she had taken down the music posters, filled the holes with spackle, and asked Rachel Fischer to help her paint the walls with a fresh coat of Garden Mint. She had bagged the clothes and books and photos and put them in the storage shed. After all, if—when—Jess came home, she would not be a teenager. She would be an adult, ready to move on to her  own  space. Maud had replaced the double bed with a burgundy twill sofa sleeper, adding  throw  pillows,  an  ottoman,  and  a  small  television and DVD player.

The one thing she had left the same was Jess’s desk, which had belonged to Maud when she was a girl and which sat as it always had under the window facing the street. A simple white cottage desk with three drawers and a hutch, where Jess had done her homework and written in her diaries—her notebooks, she’d called them. Plain black–and–white composition books, their sturdy covers held shut with rubber bands. After Gil Alvarez returned the notebooks, which he and the police had scoured for clues, Maud hadn’t packed them away, storing them instead in the lower desk drawer, along with the old answering machine. She pulled them out sometimes, reading them again even though she knew every word. Couldn’t stop knowing them. Two years’ worth, except the notebook from her last weeks, which she must have had with her. She pulled one out now, pressing the spine open with the heel of her hand. She ran her finger over the pen and pencil marks, feeling the indentations. She skimmed the first entry, written the day they’d arrived.

—So here we are. Sycamore, Arizona. God’s little slice of heaven. The whole place is about the size of five blocks of our old neighborhood. What in the name of all things holy was Mom THINKING? Tells me, We need a change, J–bird. Yeah, so schlep your only daughter to the flat–fuck middle of nowhere? GREAT idea.

Maud scanned to the end of the entry, to the poem whose stanzas slanted down the page.

Tonight you watched the universe from the pavement

the sky so black it howled

Or was that you?

You lifted your finger to find your place in space

nestled in a nest of stars

Are: the verb to be (or not to be) Conjugate it:

I am You are She is

When will you finish the sentence, fill in the blank?

Dog–ear the page of yourself don’t lose your place

Maud could hear Jess’s voice, or what she thought of now as her voice, husky, as if she’d just woken up. She pulled the answering machine out, too, plugged it in, and played it.

There it was, tinny on the cassette: You’ve reached Jess—and here, Maud’s voice, chiming in—and Maud Winters. You know what to do and when to do it, so do it. Then Jess’s honking laugh, before the beep. Maud rewound the tape and played it again. And again.

Maud could see Jess sitting there, hunched over the desk, filling the pages with her looping scrawl. Back then, Maud had thought this was normal, a good sign. A teenage girl writing in her diary—thank god. She had believed Jess was working out her anger and hurt about the divorce, getting it down, getting it out. And then came Thanksgiving. Maud could still taste the mouthful of dry turkey she’d been chewing, could still see Rachel’s dark eyebrows pulled tight together, Dani putting her forehead down on the table and retching onto the carpet. Adam, pale as the mashed potatoes. And Jess: hiding her face behind her brown curls, eyes gleaming, cheeks flushed, flapping her hands as if she could shake it away.

She flipped to the last page, where she’d taped Jess’s final note:

I’ll be back in a couple hours. Don’t worry.

Maud closed the notebook. None of it mattered now. None of it helped. No answers, no hidden clues. All suspects with airtight alibis. The prevailing theory: Just another teenage runaway who didn’t want to be found.

Except Jess wouldn’t have run. Maud knew it. She knew that much.

From Sycamore. Used with permission of Harper Collins. Copyright © 2017 by Bryn Chancellor.

Eight Secrets About Sex From People I Know 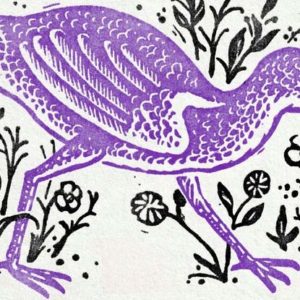