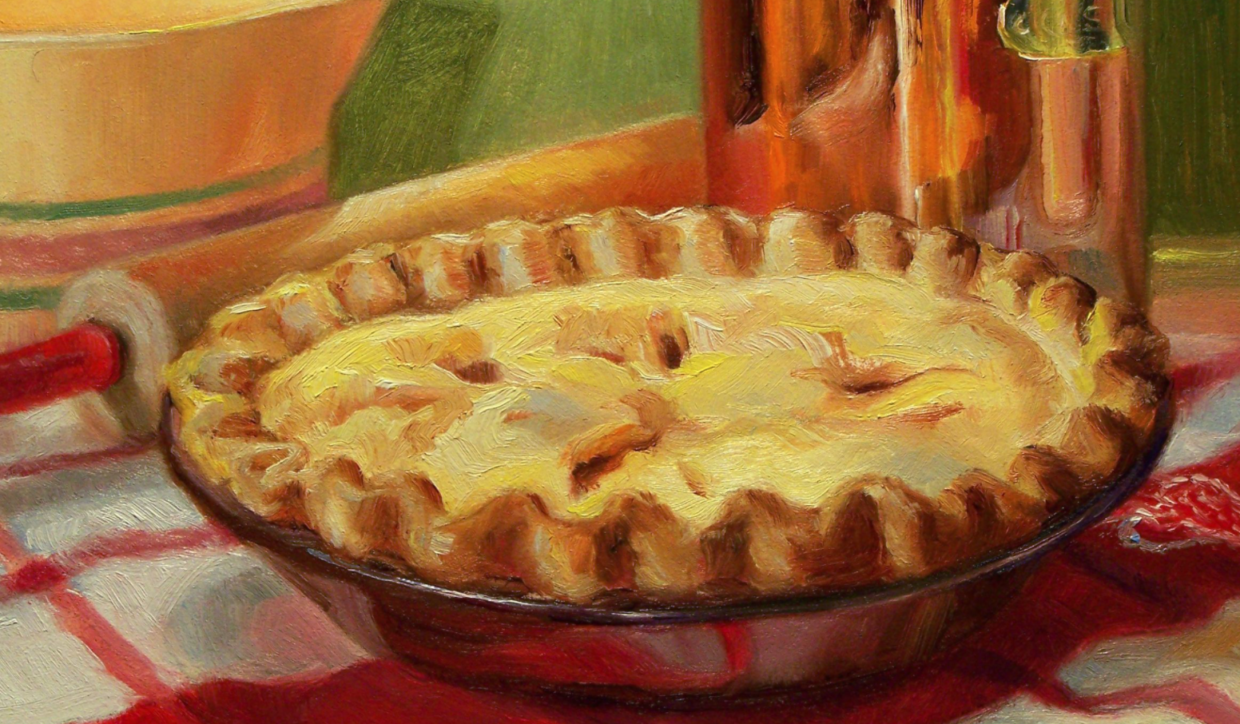 “The great beauty of an apple pie breakfast, aside from its power to generate indigestion,” writes R. K. Munkittrick in 1891, “lies in the fact that it doesn’t leave behind it a number of dishes thickly incrusted with ham grease to be cracked with a hammer or melted off over a candle.”

Pies were everything that tea wasn’t: hearty, available on demand, suited to travel, untamed, utilitarian, and unpretentious. They kept well, being sealed off from air and preserved with sugar; traveled well, being protected by a crust; and could easily be baked ahead and grabbed in the morning, so they met the demand for convenient, on-the-go meals Americans would become known for. During a time when the British were becoming increasingly proper, placing emphasis on decorum, etiquette, and social hierarchy (one of the reasons tea became popular in Great Britain was that coffeehouses were restricted to men), America’s humble pie showed the world a new form of liberty and freedom, unencumbered by pomp and circumstance: a world without limits, wherein women could drink not only coffee for breakfast but hard cider or melted bear fat.

“The pie is an English tradition,” writes Harriet Beecher Stowe in 1869, “which, planted on American soil, forthwith ran rampant and burst forth into an untold variety of genera and species. Not merely the old traditional mince pie, but a thousand strictly American seedlings from that main stock, evinced the power of American housewives to adapt old institutions to new uses.”

Among those adaptations was the transformation of pie’s crust; you see, despite there being an abundance of birds and berries, wheat was initially scarce in the colonies, particularly in New England, and this forced colonist to literally stretch their crust until it became flaky and thin—making American crusts not just more edible but also more appetizing.

It is substantial, it is satisfying, it is hard to digest, and therefore it is no light and trifling symbol of the solid, satisfying and tenacious life of America.

Writes Charles Dudley Warner in 1872, pie was so ubiquitous in the colonies that its absence would have been more noticeable than a scarcity of Bibles.

“This country was founded by men who had pie for breakfast, pie for dinner, pie for supper; in addition they usually had a slice or so before going to bed at night,” reads a 1922 editorial in The Nation. “The only time they did not eat pie was when they were asleep, at work, or in church.”

The author then goes on to blame the corruption of American youth on the invention of marshmallow nut sundaes and banana splits and to suggest Lincoln could never have freed the slaves if it weren’t for his habitual indulgence in pie—this from a paper founded to “wage war upon the vices of violence, exaggeration and misrepresentation” in the media.

Sure, pie is immoderate, overindulgent, unrefined, and potentially inflammatory, but so is America.

Meanwhile, the English continued to eat beans on toast for breakfast, stuff their pies with pigeon’s blood, and in general treat pie like a second-class citizen; and while American doctors and journalists hailed pie as a cure-all and the elixir of life, the English condemned it as a social disease, declaring “the present civil strife in America is to be looked upon as a hideous nightmare, produced by half a century’s indulgence of an unhallowed appetite for pie.” Again, this is from a medical journal.

In 1865, British journalist George Augustus Sala wrote in his diary of America that “the real social curse of the Atlantic States is Pie,” “that an unholy appetite for Pie works untold woes,” and that “the Pie fiend reigns supreme.”

“The sallow faces, the shrunken forms, the sunken eyes, the morose looks, the tetchy temperament of the Northerners,” he writes, “are attributable not half so much to iced water, candies, tough beefsteaks, tight lacing, and tobacco-chewing, as to unbridled indulgence in Pie.”

He went on like this for four pages, later accusing American girls of taking pies to bed with them. The bastard.

Meanwhile, Rudyard Kipling, the British author of The Jungle Book who moved to Vermont in the late 1800s, called New England “the Great Pie Belt” and questioned the “moral and physical condition of a people which eats pie for breakfast, pie for dinner, pie for supper.”

Americans, of course, fired back.

In 1884, the New York Times published a biting parody in response to British criticism of Ralph Waldo Emerson’s habit of eating pie for breakfast:

An indiscreet and perhaps malevolent person who once breakfasted with the late Ralph Waldo Emerson has revealed the fact that Mr. Emerson was accustomed to eat pie at breakfast. This revelation has naturally caused a very painful sensation, and not a few persons who had hitherto admired what they conceived to be the philosophical ideas expressed in Mr. Emerson’s writings have suddenly discovered that Mr. Emerson was not a philosopher and that his writings are filled with the vagueness that characterizes a mind warped and weakened by pie.

After warning readers that eating pie might cause them to compose poetry, attend prestigious schools, and gaze silently at the moon, the authors went on to suggest that “no pie shall be eaten until it has been thoroughly disinfected by prolonged immersion in a bath composed of carbolic acid, Worcestershire sauce, and permanganate of Sulphur” to avoid any “danger of increasing the flood of poetry, philosophy, and generally misery which has hitherto devastated so large a part of our country.”

And this back-and-forth continued for quite some time; eighteen years later, the Times was still declaring pie “the food of the heroic,” boasting that “No pie-eating people can ever be permanently vanquished,” and calling it “a significant historical fact that England’s glory was greatest in the days when her gallant sons ate pie” and that such glory and greatness had long since crumbled.

During an 1889 debate on the national flower, a Milwaukee journalist even suggested that the United States abandon its search for a symbolic flower and look instead to apple pie—it being more substantial and indicative of American life than the flimsy plant:

What’s the matter with the apple pie as a national emblem? The apple pie grows in every section of our beloved country, varying in thickness and toughness of crust, it is true, but always characteristically American. In the homes of New England, in the smackhouses of the South, on the lunch counters of the North, at the wayside stations of the towering Rockies—everywhere in this vast country the flaky or leathery crusts inclose the spiced fruit of the apple tree. Every true American eats apple pie. It is substantial, it is satisfying, it is hard to digest, and therefore it is no light and trifling symbol of the solid, satisfying and tenacious life of America.

Another thing in favor of the apple pie as a national emblem is that it is hated, reviled and feared by foreigners, just as our great Republic has been. Like our free institutions, the apple pie has held its own against all the world. The French pate, the German coffee cake, the English tart, the Scotch oat cake, have all been offered as substitutes, but on every loyal table the apple pie holds its place of honor.

The author then closes by suggesting:

We should go further than to make the apple pie the national flower; we should embody in the Constitution of the United States a requirement that no foreign immigrant should receive his final papers of naturalization until he should eat an apple pie in the presence of the Court.

And maybe that author was right. The search for a national flower would last another ninety-seven years until the Reagan administration finally settled on the rose in 1986 and include many front-runners most Americans had never heard of, like goldenrod and arbutus. And what, really, has the rose done for America? The American colonies didn’t survive on rose water. American soldiers weren’t substantially taller than the British during the Revolution because they ate roses for breakfast.* American pioneers didn’t ride west with roses in their bags. The majority of roses aren’t even grown in America but in Colombia and Ecuador, where they’re often the product of child labor and banned pesticides.†

In fact, apple pie might have made a decent national bird, too. Benjamin Franklin would have been on board with this, having imported American apples by the barrel while living in London; introduced the English to the Newtown Pippin, a variety that would singlehandedly convince the queen to lift the tariff on American apples; and, in a 1784 letter, criticized the bald eagle for being lazy and immoral:

For my own part I wish the bald eagle had not been chosen as the representative of our country; he is a bird of bad moral character; he does not get his living honestly; you may have seen him perched on some dead tree, where, too lazy to fish for himself, he watches the labor of the fishing-hawk; and when that diligent bird has at length taken a fish, and is bearing it to his nest for the support of his mate and young ones, the bald eagle pursues him and takes it from him. . . Besides, he is a rank coward; the little kingbird, not bigger than a sparrow, attacks him boldly and drives him out of the district.

Franklin suggested the turkey as an alternative to the eagle but surely would have understood the repercussions of its being named after another country* and nearly wiped out by American colonists. (Try to recall the last time you saw a flock of five hundred turkeys running wild.)

Apples, meanwhile, are inherently diverse. They can be white or brown, pink or yellow, red or green; mixed or speckled, streaked or russeted; they can be fat, round, or pear-shaped; coarse or chalky; sweet, sour, or bitter; they can be English or Swiss, German or French; poisonous or forbidden. Add them to pie, and they become both sponge and catalyst.

“Do not suppose that we limit the apple-pie to the kinds and methods enumerated,” writes Henry Ward Beecher in 1862. “Its capacity in variation is endless, and every diversity discovers some new charm or flavor. It will accept almost every flavor of every spice.”

Perhaps most poignantly, the apple itself, like the colonists who planted it, refuses to be wrangled. “Sown by chance, or even sown intentionally,” writes Maguelonne Toussaint-Samat, “apple trees almost always revert to the wild form instead of breeding true to the mother tree.”

One could certainly say the same about early colonists—and the country they colonized.

Sure, pie is immoderate, overindulgent, unrefined, and potentially inflammatory, but so is America; so were Searle and Emerson and that guy who drank a quart of rendered bear fat without vomiting; so are free speech, New England winters, and Fourth of July cookouts; so was declaring independence, dumping shiploads of tea into Boston Harbor, and fishing uncharted waters with frying pans in pursuit of the sweet, if sometimes excessive, taste of liberty. 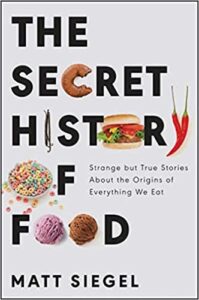 Excerpted from The Secret History of Food. Used with the permission of the publisher, Ecco, an imprint of Harper Collins. Copyright © 2021 by Matt Siegel.

Matt Siegel has written about food and culture for publications including The Atlantic and The Paris Review. Previously an English professor, he now lives in Richmond, Virginia, where he writes full time and consults with brands in the food and beverage industries. His dog's name is Waffles. 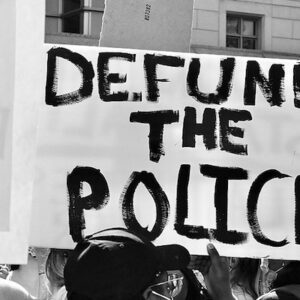 In this week’s episode, Kendra and Jaclyn discuss books around the theme of incarceration. From the episode: Kendra:...
© LitHub
Back to top
Loading Comments...