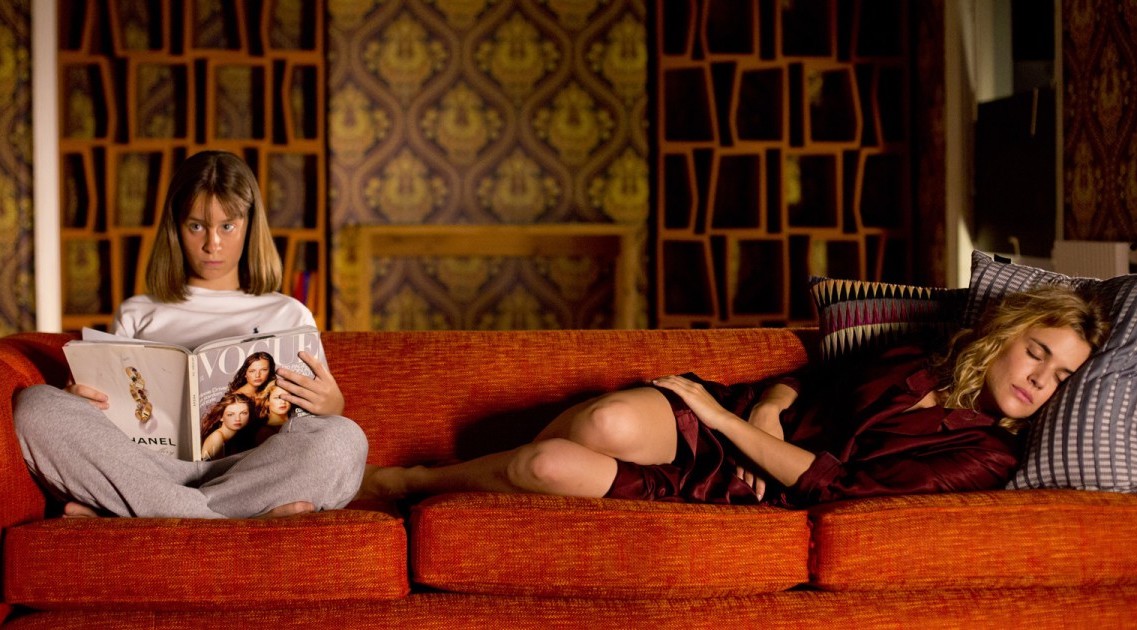 Substance If Not Style: On the Radical Similarities of Alice Munro and Pedro Almodóvar

Last summer I found myself rewatching The Skin I Live In—Spanish auteur Pedro Almodóvar’s 2011 horror/sci-fi film about a mad scientist who forcibly transforms a gorgeous young man into a gorgeous young woman—and I noticed something that felt out of place. In an early scene, Almodóvar very pointedly lets his camera linger on a copy of Alice Munro’s story collection Runaway.

I did a double-take, rewound ten seconds, and watched again. And yes, there it was, “Alice Munro” plastered across the top of a Spanish-language edition of the book. I paused the film to ponder what exactly she was doing here. Suddenly, a satisfying realization popped into my head. I had an inkling of why these two storytellers went together.

In addition to watching Almodóvar that summer, I happened to be reading a lot of Munro. I love how her writing really lets you feel the powerful Canadian weather, and I spent a hot California July soaking up the potent springs and summers in Munro’s stories. As I read, I thought about how Munro is really a masterful writer of place, and how I happened to be familiar with Munro’s favorite parts of Canada: the Toronto area, the space between Toronto and Lake Huron, and the untamed expanses of British Columbia. I love reliving my time in Canada via Munro, just as I love reliving my time in Spain through Almodóvar, another master at portraying place in his works.

I thought back to Julieta, the 2016 film that Almodóvar adapted from three stories in Munro’s Runaway, and how whenever I read Munro’s Runaway I visualized it through Almodóvar’s lens. For years now, these two storytellers have been writing characters for each other, creating visuals that bring the other’s work to life, evoking places that fit into each other’s locations, drawing out confidences and dilemmas and vulnerabilities that could slide into any of their narratives. That summer I began to understand how, for all the superficial differences, these two storytellers were really quite alike.

Where to start among all of the synchrony in a combined one hundred-plus years of artistic creation? Perhaps with the simple, but foundational, observation that they are exquisite observers of the norms and manners of their respective cultures, carefully constructing elaborate likenesses of their society’s version of patriarchy.

For Munro it tends to be a more antique, rural version of male chauvinism, presiding over hard-working, modest women scratching out a lonesome life. Although Almodóvar too has a penchant for women hustling on the margins, his scenarios often play up the bustle and luridness of urban, postmodern Spain, showing a modern, cosmopolitan version of misogyny. Both of them lovingly construct their own intricate dioramas of complicated social milieus—and then gleefully smash them up. In her recent book on the Australian writer Beverley Farmer, Josephine Rowe offered a pithy summary of how a Munro story feels: “A reader may think she’s settled in a demure domestic milieu when all of a sudden, someone’s elderly mother blows it to bits by listing into the particulars of a wistfully remembered orgy.” That’s a scene that should be in an Almodóvar film, if it isn’t already.

I began to understand how, for all the superficial differences, these two storytellers were really quite alike.

If it’s clear that both frequently portray female heroines and their circumstances, they also fill these protagonists with a powerful urge to escape. When Vintage released a movie tie-in version of the three Munro stories that were adapted into Almodóvar’s film Julieta, they tapped the director to try to explain just what he saw in the Canadian. In part, he wrote:

Despite the cultural and geographic distance, I have always felt very close to Alice Munro’s themes: the family and family relationships in a rural, provincial, or urban setting. And also the desire, the need to escape from all that; always one thing and the opposite, without that meaning the slightest contradiction.

Almodóvar capitalizes on that drive to escape, be it an escape from a physically limiting space, or an escape from the existential limitations that come with societal mores. Much like Munro, this flight tends to put his women in search of families, and, also like Munro, it makes them subject to cruel twists of fate. As they unfurl these knotty tales, both cast a loving and sympathetic—if sometimes sardonic—eye at their female characters as they try on different versions of femininity.

If the woman in flight—and thus also in self-creation—is a standard of both Munro and Almodóvar, we can add that both are among that sort of artist who relentlessly turns their standard tropes over and over again, filling their creations with repeating motifs, plotlines, and scenes, yet never letting that material become dull, repetitious, or predictable. Usually their woman in flight is escaping from or toward another favored theme—namely, domesticity.

In their hands, domesticity is both the cozy, familiar realm it is purported to be, as well as something that is much more anomalous than generally acknowledged. It is a place of confidences between women, a place of mothers and familial love, yet also one of betrayal, secrets, and mystery. Out of this dialectic they come to make the domestic complicated and potent, inhabited by love, loneliness, self-formation, passion, longing, regret, acrimony, and most of all memory. In short, the forces that push us past what we know about ourselves, the forces that transform the world we live in—and us.

In “Chance,” the story that sparked Almodóvar into bringing Munro to the cinema, Juliet is escaping one domestic realm in hopes of entering another. She is leaving a lonely and romantically disappointing life as a Greek teacher in order to meet a man who seems to be in love with her. Much of the story occurs in the train on which she met this man six months prior, a different train ride in which Juliet was escaping a different domesticity in order to enter the life of the boring Greek teacher. While in transit the first time, a creepy stranger attempted to recruit her as his chum for the week-long, cross-country ride; she did the assertive thing, which was to invent an excuse and dodge his company. Shortly thereafter, she learned that he had thrown himself in front of the train, and she quickly began to worry that her refusal had pushed him over the edge. This crisis precipitated her meeting the man who would become her potential lover, a man who posed his own complications.

These are stories of women who are in the process of transforming, often engaged in the risky game of trying on identities, spurred on by some powerful yet unarticulated need to redefine themselves.

As so often happens in Munro, in “Chance” the action turns on a young woman whose brush with the existential causes her to re-examine the uneasy coexistence she’s forged with a male chauvinist world. Juliet, like many of Munro’s protagonists, is drawn into events that personally compromise her, and although this process diminishes her innocence and complicates her morals, it also provides her with a romantic relationship that is rewarding, albeit problematic. There is a feeling of fate to this chronology, as though the women whose lives Munro depicts have little choice but to discover their best possible accord with the forces that govern their life. The ending of “Chance” is emblematic of Munro’s endings: her protagonist has become more aware of—and thus less vulnerable to—the misogyny that permeates the world she lives in. And although this knowledge brings maturity and self-advocacy, it also is unsettling knowledge, the kind that makes a person weary and vigilant. This is the kind of problematic ending that Munro specializes in.

In Almodóvar’s 1999 film All About My Mother, Manuela—who has recently lost her son in a tragic accident and has fled to Barcelona to find the boy’s “father”—makes the Munro-esque declaration that, “Women will do anything to avoid being alone.” The movie turns around the lives of four women—one transgender and three cisgender—who are each trying to escape their own version of loneliness. Although the women range from sex workers to nuns to actresses, the differences shrink in comparison to the powerful bonds of understanding, validation, and solidarity that they forge together. Like “Chance,” it is a brush with the existential with a complicated ending, although it is also a joyful comedy, perhaps because the women are able to create their own kind of community against an unfair world.

Both of these works are stories of women who are in the process of transforming, often engaged in the risky game of trying on identities, spurred on by some powerful yet unarticulated need to redefine themselves. Almodóvar tends to literalize his transformations, filling his films with hospitals (places of profound bodily change) as well as scenes of women making themselves up and seeing their new faces and bodies in a mirror. This is one reason he is so fascinated by transgender women—they allow him to explore a character’s transforming female identity in a very concrete way, while also indulging a love of hospitals, mirror-gazing, and the transgressive. If the physical transformations that Munro gives to her characters are far more pedestrian—like a maturing girl trying on a wedding dress—they are no less meaningful and far-reaching as Almodóvar’s more showy transformations. In both, the point is to make more visible the powerful, disorderly forces that work over a psyche as it is in the process of redefinition.

There is always something to be learned when storytellers with such deep concordances emerge from such divergent circumstances. There are many ways to tell similar stories, and it is the compassion, sensitivity, and perception of the storyteller that matters more than their origins or ostensible styles. Moreover, the same story needs to be told in different forms; I have found that Munro and Almodóvar reflect different sides of myself, while also resonating with the same basic stuff deep within me. Like their characters, within their narratives I find my own spaces of safety and familiarity, even while also witnessing a world that can be unfair, hard, and foreboding.

Alison Bechdel on Transcendentalism, Bliss, and The Secret to Superhuman Strength 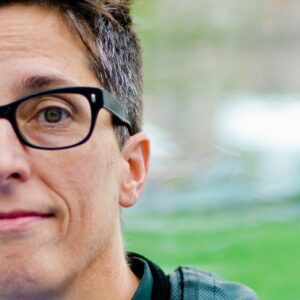 Alison Bechdel on Transcendentalism, Bliss, and The Secret to Superhuman Strength

About halfway through Alison Bechdel's new graphic memoir, The Secret to Superhuman Strength, a little-known anecdote from...
© LitHub
Back to top