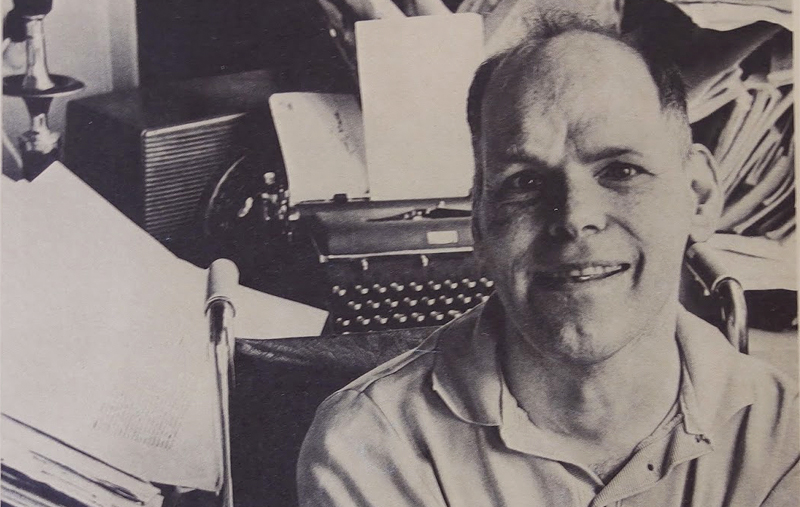 How an Obscure Poet with Cerebral Palsy Influenced an Entire Generation

The following is excerpted from Charles Bernstein’s Pitch of Poetry (University of Chicago Press, 2016). It is the foreword to Eigner’s Selected Poems, edited by Robert Grenier and Curtis Faville, forthcoming from the University of Alabama Press.

Larry Eigner was born in Lynn, Massachusetts, on August 7th, 1927, and spent most of his life in nearby Swampscott, midway between Boston and Gloucester, just a few blocks from the ocean. Eigner lived in his parents’ house in Swampscott until 1978, when, shortly after his father’s death, he moved to Berkeley, where he lived until his death in 1996.

These facts are bare, commensurate to Eigner’s poems, which bear witness to the preternatural spareness of his life, just as they bear the weight of a gravitational aesthetic force field unprecedented in American poetry. That’s an extravagant claim for a poet who averted extravagance. And it’s an incredible claim too, given Eigner’s obscurity: despite legions of fervent readers, Eigner’s magisterial four-volume, almost two-thousand-page Collected Poems received virtually no public recognition when it was published by Stanford University Press in 2010. With this volume, Collected editors Robert Grenier and Curtis Faville have created a perfectly scaled introduction to the full scope of Eigner’s work. [1]

To be an obscure poet is not to be obscure, to invert John Ashbery’s quip that a famous poet is not famous. Eigner’s work has made an indelible impact among the generation of poets brought together in the iconic 1960 New American Poetry anthology. Eigner’s poetry was recognized early on by Robert Creeley, Charles Olson, Denise Levertov, and Cid Corman and was subsequently published by hundreds of small press editors in pamphlets, books, and magazines. In 1978 Bruce Andrews and I put an essay by Eigner on the cover page of the first issue of L=A=N=G=U=A=G=E, and Ron Silliman dedicated his related anthology In the American Tree (1986) to Eigner. Robert Grenier, his greatest champion, has placed Eigner’s work at the center of an American poetry tradition that begins with Pound and Williams, a view shared by the prescient French poet Claude Royet-Journoud. Grenier writes of Eigner’s work (and his own) as “words in space,” noting the significance of the visual spacing on the page as distinct from concrete and visual poetry but no less inextricably linked to the technical means of alphabetic reproduction, in this case the manual typewriter. As in the Collected, the editors have remained true to the page space and typewriter font that is intrinsic to Eigner’s practice. His poetry is, to extend a motto of Olson, composition by typewriter page.

To be an obscure poet is not to be obscure, to invert John Ashbery’s quip that a famous poet is not famous.

Eigner’s pages can be seen as etchings on a “blind glass” (to use a phrase of Gertrude Stein’s) or opaque windowpane: it is as if the words float in an infra-thin emulsion. As you sit with the poem, letting it slowly emerge, its depth becomes as incalculable as “the sustaining air” Eigner evokes in a February 1953 poem. [2] The play of depth and surface, figure and ground, metaphor and linguistic materiality, thought and image, description and event, and, above all, duration and instantiation is everywhere in these poems.

The poetry of Larry Eigner was profoundly shaped by his cerebral palsy that resulted from a difficult birth. A wheelchair allowed him mobility, but his speech was slurred, and he wrote and typed with just his right index finger and thumb. While Eigner rarely mentions his physical condition in his poems (which mostly involve looking out from, rather than looking onto, himself), the ontology of the poems, the way they lay bare their embodiment, is everywhere informed by the physical circumstance of his being in the world. A worthwhile exercise is to read an Eigner poem with and then without the frame of his disability. This toggling will begin to activate his poetry’s 4-D potentiality (the fourth D being duration): the poems follow the modernist principle of imitating not the look but the conditions of nature, and as such they are able to reflect serial projections without being determined by any one of them.

Eigner rarely uses the conventional “I” of lyric poetry; in that sense, his work is an extension of the poetics associated with Mallarmé, Stein, and the Objectivists. Eigner does speak through his poems, just as his gaze, like his awareness, is a constant companion in reading. But these poems are grounded not in the poet’s expression but in each reader’s perception. As Eigner puts, it, the poem is “an / event in your eye” or “on the eyeballs.” [3] Eigner creates poems that provide active thinking fields for perception (or to reverse that, perceptual fields for reflection). The poems are proof of a daily, meditative practice. For those looking for plot or props or effortless reading, just as for those not looking for those things, this book will push against sensations of entropy, tedium, sameness, emptiness . . . until the features that gave rise to those sensations set off aesthetic endorphins, opening doors to the sublime.

It’s a question of scale. A snail’s pace is not slow to a worm. Even geologic time has a rhythm.

The particular circumstances of Eigner’s worldly life are the ground of his writing. I await Jennifer Bartlett’s biography to illuminate the daily life of the poet. Eigner, who stayed in his childhood home much of his life, had a lifestyle that was markedly different from that of his fellow countercultural New American poets, with their drugs, lovers, and rock ’n’ roll. Eigner spoke in a way that was hard for the casual or new listener to comprehend, but he came in loud and clear if you gave him the time. His primary relationship was with his parents, and especially his mother, Bessie, who must be acknowledged for supporting her son in a way that heroically defied 1950s norms about his prospects.

Eigner spoke in a way that was hard for the casual or new listener to comprehend, but he came in loud and clear if you gave him the time.

Eigner’s work offers exemplary realization of an alternative to the sexual politics that lacerates much twentieth-century poetry. He is a key American Jewish poet, though he rarely makes references to specifically Jewish subjects (“my mother is Jewish / she thinks so”). [4] Eigner grapples with a poetics (and immanence) of the ordinary that connects him to Stein, Louis Zukofsky, Charles Reznikoff, George Oppen, Jackson Mac Low, Hannah Weiner, and Ted Greenwald. In this respect, I think also of Lorine Niedecker, James Schuyler, Ron Silliman, Lyn Hejinian, and Grenier. Eigner seems to be evoking William Carlos Williams’s “Between Walls” when he writes, “between walls the light / to give / blankness in shadow.” [5] I read these lines as an ars poetica: the play of light and shadow creating the animated blankness of the page. Is this a literary allusion or is it a Zen koan? I think of Philip Whalen (to whom Eigner dedicates a poem), Norman Fischer, Leslie Scalapino, John Cage. You don’t need these overlays to appreciate Eigner, but after a while, you get to play. For example, Dickinson’s “You cannot solder an Abyss / With Air” and Blake’s doors of perception both come to mind with Eigner’s “refresh the eyes / against the abyss”: note, not your eyes or my eyes. [6] “Refresh” brings to mind blinking, a serial scanning akin to moving frames of film. Each moment anew.

Eigner’s sudden paratactic leaps / syntactic-synaptic jump cuts—the basic prosodic movement of his poems—are electrifying. Following Dominique Fourcade, I think of Manet’s motto “Tout arrive”: everything happens in the blank space of the page. In place of the poem as a record of psychodrama beyond the poem, action in Eigner arrives at the level of the phrasal hinge: a reinsistent prosody of shift / displacement / reconstellation. Textual slivers shimmer. The poet drops away as the world keeps arriving: a be-in of the beginnings of middleness (in medias res).

A leap of faith, this to that: “suddenly / . . . / (to leap / and break.” [7] Eigner’s radical ordinary averts symbols and confessions. The intensifying movement of fragments-in/as-appositions, Eigner’s algebra of connection-in/as-inflection, is never abstract or dissociated: poetic feet land on the perceptually concrete.

These poems sublime the sublime.

Only this and nothing more.

[1] Eigner also wrote essays, which have been collected as Areas Lights Heights: Writings 1954–1989, ed. Ben Friedlander (New York: Roof Books, 1989). Additional material online at EPC, including biographical notes by Grenier and Friedlander and an autobiographical compilation by his brother Richard Eigner, epc.buffalo.edu/authors/eigner. Recordings of Eigner reading and talking, including an interview by his friend Jack Foley, are at the Eigner PennSound page (linked at EPC).

[6] October 1959, 2:353. Also cited: The Poems of Emily Dickinson, ed. T. H. Johnson (Cambridge, MA: Belknap Press of Harvard University Press, 1955), #546, 2:419. William Blake, Marriage of Heaven and Hell (ca. 1790): “If the doors of perception were cleansed everything would appear to man as it is, infinite. / For man has closed himself up, till he sees all things thro’ narrow chinks of his cavern” (www.blakearchive.org/exist/blake/archive/work.xq?workid=mhh).

Charles Bernstein is the Donald T. Regan Professor of English and Comparative Literature at the University of Pennsylvania and a fellow of the American Academy of Arts and Sciences. Bernstein has published five collections of essays — Pitch of Poetry (Chicago, 2016), Attack of the Difficult Poems: Essays and Inventions (Chicago, 2011), My Way: Speeches and Poems (Chicago, 1999), A Poetics (Harvard, 1992), and Content's Dream: Essays 1975-1984. His books of poetry include Recalculating (Chicago, 2013), All the Whiskey in Heaven: Selected Poems (Farrar, Straus and Giroux), Girly Man (Chicago, 2006), With Strings (Chicago, 2001), and Republics of Reality: 1975 - 1995 (Sun & Moon, 2000). 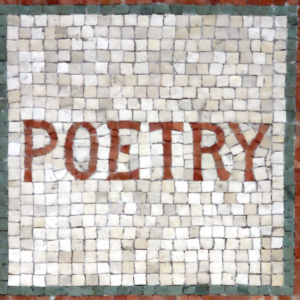 Every day (every week, every month) at Literary Hub is poetry day. Today, however, is Poetry Day. Here, deep in the middle...
© LitHub
Back to top
Loading Comments...