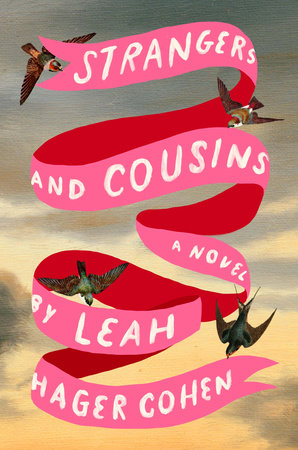 The following is from Leah Hager Cohen's new novel, Strangers and Cousins. The novel follows an already sprawling family hosting an even larger and more chaotic wedding, an entertaining story about family, culture, memory, and community. Leah Hager Cohen is the author of five works of nonfiction, including Train Go Sorry, and five novels, including The Grief of Others. She is the Barrett Professor of Creative Writing at the College of the Holy Cross.

Listen to this excerpt, read by the author, here or below:

Clem wakes today, three days before her wedding, much as she does every morning: impatient for her life. Impatient to make her entrance in it. Standing on the threshold of what Mantha would call Future Life. The Main Act. She feels the impatience as a physical sensation. In her fingers, mostly, a king of distant throbbing, as if she had a build-up of sap in her veins and it needed to flow. Once when she was young, maybe twelve—and still believed, just automatically, never having taken the time to consider otherwise, that her mother, simply by virtue of being her mother, was like her: a native of the same landscape, familiar with all the same sensations and perspectives—she’d said, You know that thing where your fingers hurt and you try to stretch them?

No, I mean the thing you get where it’s like an ache deep inside and it’s kind of psychological because it’s connected to like a homesick feeling but it’s not that because it can happen even when you’re home?

No, I don’t know that thing.

A slap that stung the more for having no malice in it; Clem didn’t doubt that Bennie was telling the truth, that she really had no idea what Clem meant.

Now she starfishes her hands open and shut, wrings them softly to ease the ache. She looks around. Hannah and Chana are both still burrowed, only their heads—razored raven chop and tangerine frizz, respectively—sticking out of the tops of their sleeping bags. It had been raining much too hard last night to even consider setting up their tent; they’d camped instead in one of the attic rooms, their sleeping bags sardined horizontally across a mouse-chewed futon, one wobbly standing fan and one ancient box fan stuck into the window no match for the marshy atmosphere.

Who knows, maybe she does have arthritis, or some rare bone marrow condition confined only to her hands. When she wakes beside Diggs she often kneads her awake, pressing her fingers against the muscles of her beloved’s warm, smooth pudding arms and the wing-nubs of her scapulae, until Diggs mumbles, “Still sleeping here,” although on some mornings, given the right sort of provocation, she’ll deign to roll over and pounce. To sit astride, looking down with regal curiosity, and lace her own strong fingers through Clem’s.

Their differences are legion. Beginning, most obviously, with the black-and-whiteness. “Pudding?” Diggs repeated the first time Clem used the word, and arched one eyebrow suspiciously. “As in chocolate pudding? As in some Kozy Shack? You my little race-fixated cracker-girl?”

But, “No, no!” Clem protested. “As in pudding-smooth, creamy and custardy. As in delicious and yummy and good and…”

A few seconds later, more honestly: “All right, maybe I was thinking of chocolate pudding. But not in a fetishy, exoticizing way.”

And after a few seconds more: “…and anyway certainly not Kozy Shack. If anything, Swiss Miss.”

A mighty roar from her beloved then, hot breath in her ear, claws on her thighs, wild laughter erupting from both as they tumbled and scratched and got each other off.

This is what’s so great about them, what makes it work and keeps it strong: when race comes up they talk about it, address it head-on. Anyway, that’s not even what Clem thinks of as their biggest difference. The main thing is now practical Diggs is, how logical and well-equipped to navigate worldly matters, to believe in worldly matters as navigable (even now, she’s at her summer job with the ACLU’s Program on Freedom of Religion and Belief, a paid internship between her first and second years of law school), while Clem is more disposed to see life as ambiguous and absurd, a sort of indistinct mush, one gigantic, swirling unpredictable concoction the point of which is to surrender all your heart and all your might, not knowing—not even presuming to ask—where it’s headed. To surrender, as Clem put it in the introduction to her senior thesis, the ego’s designs to the eternal truth of uncertainty. Diggs says this difference is actually related to race, says Clem’s loosy-goosey approach to career is at least in part a function of her privilege and not everyone has the option to major in an artsy-fartsy field.

Which Clem gets. Totally. Which is part of what she’s like to help change. Through art. Art is not frivolous, she tells Diggs, quoting her thesis advisor. Ignazio Leopardi: about a million years old and still crazily rakish, with a tiny yin-yang stud in his ear, purple eyeglass frames, a frankly libidinous laugh. Art is not an accouterment, she tells Diggs, not an indulgence, but a societal expedient, a toll of social change! It’s like the leopards in the temple.

The whose in the what?

The leopards. In the temple. Kafka. She says it as if she has known it forever, but in truth she never read a speck of Kafka beyond Gregor Samsa until this past spring.

Theater is like the leopards, Clem told Diggs. It disrupts the status quo, she tried. Until its ideas bring about lasting change by getting incorporated into society.

Maybe. Diggs lubricated her skepticism with diplomacy. She’s good at that. But if we’re talking expedience, law has it all over art, bambina.

Okay, Grandmaw. Diggs, who’d been a year ahead of Clem in the same small liberal arts school where they met, is older by all of thirteen months. If that’s what they’re training you to believe.

Clem’s not altogether impervious to the reality of daily life outside of the bubble of college. Her dream is eventually to be involved in some kind of Theater of the Oppressed-type work, maybe work with incarcerated youth—but she’s not all moony about it; she knows that when she first moves to D.C., into Diggs’s apartment—or rather (she’s got to practice thinking this way!) into the place Diggs found but which will soon be their shared abode—she’ll likely wind up waiting tables or temping first.

They’ve had some of their best (read: thorniest) conversations about this very issue: how do you balance dreams and reality, ambition and uncertainty, the exercise of free will with the willingness to be swept along by the current?

“Here’s the new rule,” Clem proposed one day last winter when they were trying to figure out in practical terms what their lives would look like post-wedding. “Break the wineglass and fall towards the glassblower’s breath.”

Diggs did that single eyebrow thing.

“So are we falling toward marriage,”—Diggs embroidered her skepticism with air quotes—”or choosing it?”

“Nuh-uh. Feel, nothing. Fall, nothing. I have agency. I do things by choice.”

“It’s all about intention.”

“Very romantic. So are you saying you chose to fall in love with me?”

“Never said I fell in love with you.”

Diggs watched in astonishment as they welled and overflowed before she moved in to stroke them away with her thumbs. “Lord, girl, you are sensitive. I rose in love with you.”

Now in the little attic room longing shoots bodily through Clem, painful and lovely. Oh hurry up, she thinks, a bossy little prayer: please let these last few days hurry by. It isn’t even precisely Diggs she’s impatient for. Or at least, not only. It’s herself—the fully formed self she’s waiting to discover, waiting to become. At the end of aisle, under the chuppah, after the vows. In the act of becoming—choosing—her adult role.

“When”—she actually put this question to Diggs the last time they were together, right after graduation; she had thought she might feel it that day, the sense of becoming finally evident to herself, fully assembled, not hypothetical, but no—“when do you get to the part of your life that’s really real, the part when you know you’ve arrived?”

They’d been sitting under a tree, Clem still in her commencement gown but unzipped, revealing a Jiffy Lube t-shirt and cut-off s underneath. Diggs had put Clem’s mortarboard on her own head where it looked ridiculously stylish in an outré sort of way, wilted tea roses and all. “No. Oh—is that what it is for you, though? You think? Like once you’ve gotten your law degree? Or passed the bar?”

“Depends what you mean by arrived. I mean,”—and here Diggs had done that lovely shimmy thing she does with her shoulders and neck—”I arrived the day I came out my momma.”

Clem believes it. Diggs would have arrived in the world whole and intact, united already with the root of who she was and would forever be. Even as an infant she would have been in full possession of herself. It’s a cinch to imagine newborn Diggs serene, even dignified, in her swaddling clothes.

Her fingers, she furls and unfurls. The sap, the sap.

“Quit pokin’,” grumbles Hannah beside her.

But it is. Something has changed in the night, the rain moved on and the air being pushed through the fan’s blades now is dry and fresh, the light diamantine, and the great expanse of the backyard, with its sagging barn and unmown grass and jungly, vine-choked copse beyond, all gleam golden-green.

Clem unplugs the fan, wrests it from its spot, and thrusts her own head and shoulders into the space between sash and sill. “It’s clean!” she trills. “Everything’s clean and new.” And spinning around she claps her hands, stamps a barefoot flamenco around the sleeping bags. “Get up, get up you sleepyheads! The rain has stopped—we can set up the tent!”

George R. R. Martin has written the end of Game of Thrones—he's just keeping it from you. 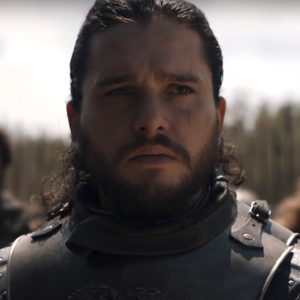 George R. R. Martin has written the end of Game of Thrones—he's just keeping it from you. Fans have been frustrated with George R. R. Martin's slow writing pace for years. After publishing the first three novels...
© LitHub
Back to top