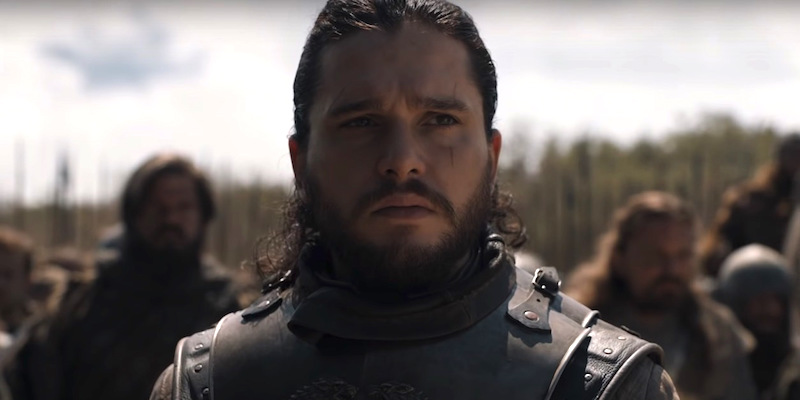 George R. R. Martin has written the end of Game of Thrones—he’s just keeping it from you.

Fans have been frustrated with George R. R. Martin’s slow writing pace for years. After publishing the first three novels in his A Song of Ice and Fire series at a steady clip, one book every two years, he began to slow down. There were five years between the publication of A Storm of Swords and A Feast for Crows, and six years between A Feast for Crows and A Dance with Dragons. Which was in 2011. The pressure mounted after the HBO adaptation became the most popular thing since the last enormous franchise with dragons and magic and grumpy scarred boys who need a haircut. But only the sound of crickets—and random prequels and quote collections and reference books—came from George’s cave.

But that doesn’t mean he hasn’t been writing. In fact, Collider has reported that, according to Ian McElhinney, aka Barristan Selmy, he’s already written to the end of the series. He’s done! And he’s been keeping it from you. Betrayal! Well, actually, what McElhinney said, on a panel at Epic Con, was this:

George has already written Books 6 and 7, and as far as he’s concerned there only are seven books. But he struck an agreement with David [Benioff] and Dan [Weiss], the showrunners on the series, that he would not publish the final two books until the series has completed. So if all goes well, in another month or two we might get Books 6 and 7, and I’m intrigued to know how Barristan, for instance, ends up going through those final two books. George, I talked to him during Season 1 and he did say to me that Barristan had a very interesting journey. But unfortunately I didn’t get to play all of that, so we’ll have to wait and see.

Hopefully, the books have better character development than the show’s final season! But we don’t know, because no one has confirmed or denied these claims as of this writing. In the meantime, please do not try to burgle George R. R. Martin’s writing cave. Or house. Thank you.

UPDATE: Since the publication of this post, George R. R. Martin has denied McElhinney’s claim on his own website:

I will, however, say for the record—no, THE WINDS OF WINTER and A DREAM OF SPRING are not finished. DREAM is not even begun; I am not going to start writing volume seven until I finish volume six

It seems absurd to me that I need to state this. The world is round, the Earth revolves around the sun, water is wet . . .  do I need to say that too? It boggles me that anyone would believe this story, even for an instant. It makes not a whit of sense. Why would I sit for years on completed novels? Why would my publishers—not just here in the US, but all around the world—ever consent to this? They make millions and millions of dollars every time a new Ice & Fire book comes out, as do I. Delaying makes no sense. Why would HBO want the books delayed? The books help create interest in the show, just as the show creates interest in the books.

So . . . no, the books are not done. HBO did not ask me to delay them. Nor did David & Dan. There is no “deal” to hold back on the books. I assure you, HBO and David & Dan would both have been thrilled and delighted if THE WINDS OF WINTER had been delivered and published four or five years ago… and NO ONE would have been more delighted than me.

Psst. Everything is going to be ok, man.