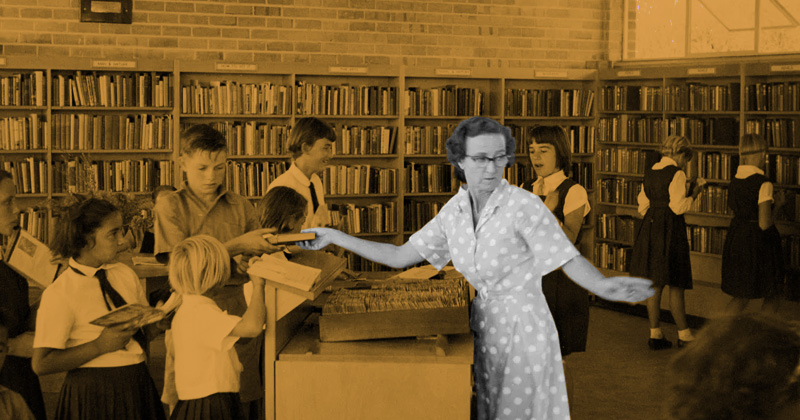 Australian writer Mandy Sayer has written an opinion piece in the Sydney Morning Herald lamenting the loss of libraries as “hallowed sanctuaries of silence and solitude.” Sayer says she grew up poor, and that her 1970s childhood libraries were a “spiritual experience,” a place for her to discover books. She contrasts this misty-eyed memory with a recent visit to her local library in Sydney.

Sayer discovers a cursing “middle-aged man with a three-day growth,” “a man in filthy jeans and t-shirt reclining on a couch,” and “an overweight man… reeking of stale piss” whose “laughter sets off coughing and sneezing fits.” Sayer paints this scene while reassuring us that we are not “in a psychiatric unit, or a Centrelink office,” (Centrelink is the Australian government welfare provider), thus characterising the people she has encountered in the library as mentally ill and/or unemployed and/or otherwise disadvantaged. Her disdain for these people is palpable and cruel.

Sayer lives in King’s Cross, a small inner-city Sydney suburb where sex workers, junkies and homeless people live side-by-side with artists and white collar professionals. Sayer is basically complaining about her neighbors, and in so doing is claiming her right to quiet study above other community members’ rights to access a public institution.

Sayer also seems upset—though she doesn’t explain why—about the way the employees of the library are dressed and the fact that they are carrying iPads. She prefers the days when librarians “ruled their kingdoms of quietude” with “iron authority,” when they shushed patrons and subjected them “to something far worse than a fine: their puckered expressions of profound disappointment.” Sayers’ view of libraries is painfully outmoded. The librarian as authoritarian, ruling over a punitive and silent panopticon is as ancient as her desire to be transported to “19th-century England or Renaissance France.” This nostalgic view of libraries is an all-to-common refrain from mostly white, mostly middle class people, the elitist and entitled.

Libraries today—Sayer fleetingly acknowledges—are different. They provide “toddler reading hours, 3D printers, community events, author talks, and free internet connections.” What she fails to understand is that libraries have always been community spaces, open to all, which is why, as a child from a poor family, she felt so welcome (that’s not to say libraries couldn’t do better at supporting diverse communities and minorities). The shift Sayer is witnessing is not the drastic decline of libraries, but rather a response by them to a changing society, one which has an increasing focus on consumerism, less public space, more homelessness, and fewer services for the mentally ill.

She’s right that the behaviour of these patrons can be undesirable and disruptive. But would Sayer suggest they be moved on from the library? Pushed out onto the street? Denied access to books, internet connections, computers, and social interaction? It is the responsibility of employers to give librarians the support and training they need to manage these interactions. Many librarians will tell you that helping those most in need, the most vulnerable in our society, is one of the most rewarding parts of the job. (Though sometimes it’s just inconvenient.)

I’d like to recommend that Sayer reserve a book to collect from her local library: Susan Orlean’s wonderful history of the Los Angeles Public Library, The Library Book. In that book, Orlean rekindles her childhood nostalgia, following it to discover the myriad ways that libraries have evolved—and are evolving—in symbiosis with their communities.