Brandon Taylor on the Importance of Science Heroes

The news of Stephen Hawking’s death reached me obliquely, as news often does these days: I was checking my Twitter timeline last night and saw, in brief passing, a tweet about a tweet embedded in another tweet. Because death hoaxes are common on social media, I went to verify the news via ABC, CNN, and other sources, and to my immense sadness, I saw that it was true that Stephen Hawking, one of the most brilliant minds of this or any time and tireless champion of the human race, had died sometime early Wednesday morning.

Since the news of his death began to ring out through Twitter earlier yesterday, I have seen Hawking praised for transcending his disability, for showing that a frail body is no match for a mighty mind, for making science accessible to everyday people, for fighting against war, for championing human rights, for his giving nature, for his kindness, for his spirit of friendship and generosity. How many people have found their way to science because of him? Or if not because of him then because of someone who had been inspired by him? Or influenced by his work? How many lives has he changed by the mere fact of his being?

Stephen Hawking’s contributions to the fields of cosmology and theoretical physics were extraordinary. I once heard someone say that what Hawking had done was akin to someone pulling a glove inside-out only to realize it had been reversed all along. There was a brief time when the public was obsessed with black holes, and Hawking was the world’s foremost expert in the field. I remember spending all of the early mornings of third grade in the library poring over the same three pages in a book about space where black holes were explained and illustrated. The inky, unctuous centers. Fuzzy edges. And in the text boxes floating near them, neat, tidy explanations about their dense gravity and the dangers of going near them, as if you could stumble upon one like a crack in the sidewalk. No doubt it was a book made possible by Hawking’s work to popularize the concept and explain it to an increasingly interested public. It’s rare, the scientist-public intellectual who becomes not merely a cult cultural figure, but a rock star.

When I was very young, I wanted to be an astrophysicist. I came of age in the 90s and early 2000s, when science television shows were all the rage. I was a geeky and nerdy, and I often spent my time mixing chemicals in my parents’ bathroom, trying to emulate Dexter from Dexter’s Lab or Beakman from Beakman’s World or Bill Nye the Science Guy. I drew rocket ships instead of practicing multiplication and long division. I daydreamed about planets beyond our solar system. I dreamed of touching the face of God. Public access television was awash in eccentric men who spoke in excited voices about scientific principles and experiments, and it made me feel a little less out of step with the world. At the center of all of that was Stephen Hawking, the only living scientist I was aware of. It’s likely that Hawking made his way into my life the way all things do—through television. It might seem odd now, but there was a time when Stephen Hawking was everywhere in our culture. There was a certain ubiquity to him. So much so, that he became a bit of a meme before memes were a thing. How often have you seen a man in a wheelchair speaking with a voice synthesizer in a profoundly eloquent way about the vastness of the cosmos? These references were of course not an attempt to place Hawking into the culture, but rather a manifestation of his prominence.

It’s always interesting to me that in such moments, we turn to eulogy as a form. By their very nature, eulogies flatten and simplify. They are constructed out of platitude and cliché, like fine, delicate sugar sculptures. You get close to the likeness of a person, but there is a lack of precision native to the materials themselves. Something refuses to resolve into focus. The human figure behind the eulogy remains at a remove. I do not think that eulogy brings us closer to understanding the eulogized as a person. It’s a kind of objectification, the conversion of the human into something greater. He would of course have hated that metaphor. It’s trite.

But the thing about eulogy is that it prompts people to say things like he transcended his disability when that is a false, dangerous idea. He lived everyday with ALS, with its myriad complications and difficulties. It is okay to say that Stephen Hawking lived with a disability. It does not diminish his accomplishments any more than his accomplishments diminish or make palatable his disability because a disability is not something requiring excuses. A disability is not something to be ashamed of. It is a part of life, and should be a part of the celebration of a person’s life. Stephen Hawking was a supporter of rights and protections for disabled people. In honoring his legacy, it’s crucial to remember that. We must remember the whole person.

There was never a time in my life when I was not aware of Stephen Hawking’s place in our world. He was like the light of stars—eternal, always with you, until one day, suddenly, gone. 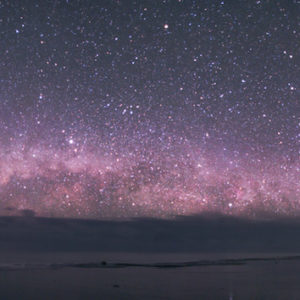 One Christmas in Dominica, my parents gave me unexpected gifts: two books about the universe. They were big, heavy, black...
© LitHub
Back to top