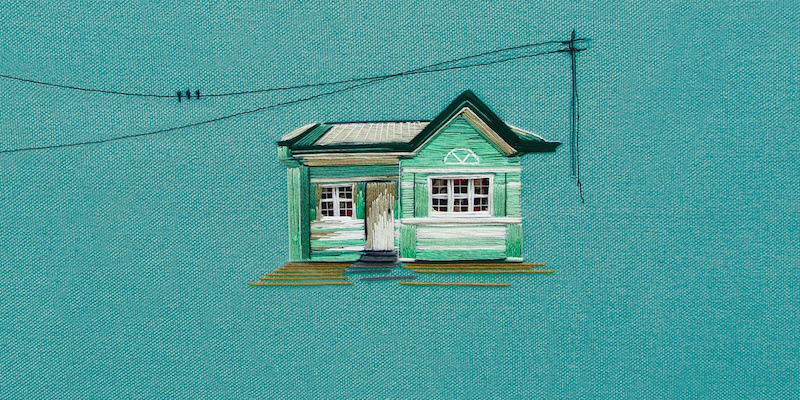 That’s how Stephanie Powell Watts, prize-winning author of the acclaimed short-story collection We Are Taking Only What We Need, describes her debut novel No One Is Coming to Save Us. Set in the fictional town of Pinewood, the story begins as JJ (Jay) Ferguson has returned home to build a mansion on a hill. Jay (that’s what he’d like to be called, except that everyone in Pinewood refers to him as “JJ”) is a rich man, although no one knows exactly how his real-estate dealings have made him so. Yet he feels impoverished, aching with love for his high-school girlfriend Ava; he wants to win her back with his material gains.

Unfortunately, Ava is now married to the feckless Henry and caught up in trying to conceive after many miscarriages and failed fertility treatments. When Henry is caught philandering, Ava and Jay get caught up in their old cycle—but in a town populated by people without jobs or purpose, it’s difficult to say whether or not the course of true love could run smooth even if one of the nearby furniture factories planed it so.

This is where Watts comes into her own and her purpose in paying homage to Fitzgerald becomes clear: Pinewood has no Nick Carraway, but it does have Ava’s mother, Sylvia. In a novel with multivarious points of view, Sylvia functions as sometime narrator and constant beating heart; she’s trying, like all of her fellow citizens, to become known and to matter to someone else.

Stephanie Powell Watts spoke with me by telephone from her home in Pennsylvania, where she is an associate professor of English at Lehigh University. Yes, we discussed The Great Gatsby, but we also covered infertility, J. California Cooper, and Jehovah’s Witnesses.

Bethanne Patrick: Tell me about your title. I haven’t seen you discuss it, yet.

Stephanie Powell Watts: I got this title early on and I really liked it. I felt like it described an emotional state that I wanted to describe in narrative, it is a moment of despair, but it can also become a moment where you gather yourself, rejuvenate, and come around again. I wanted to capture both of those ideas. Inside of adversity is opportunity.

BP: Before we get to talk about anything else, we have to address your adversity and opportunity—taking on that American classic, The Great Gatsby.

SPW: The Great Gatsby is a standalone piece of work. But what I wanted to do was talk about the cracks and crevices where I saw a different light coming through. F. Scott Fitzgerald was not writing about children, not writing about colored people, not writing about women or the lower classes and so on; I feel there’s a lot of room in those spaces for different kinds of discussion. I didn’t want to write a literal ghost story, but I did want to write about a return. What happens when someone who was once loved returns to a space, but it’s changed, and I mean quite changed?

What’s more: What do you do when the past is not a nostalgic past? It’s really true for people in places like Pinewood, especially for people of color. My parents’ generation remembers a very different landscape than mine does, one in which the shadow of Jim Crow loomed over every shoulder. This sort of nostalgia the pull of home is so powerful and so forceful even when you remember that home was a very difficult place.

BP: One of the things I noticed about all of your characters is their isolation—sometimes physical, sometimes emotional.

SPW: Thank you for asking about that. I really feel that that’s an important part of the book: Belonging, and loneliness. So many of the stories we see about people of color involve their being buffeted by a warm, supportive church or a large, boisterous family. There’s another reality for African-Americans, and it’s being by yourself and having a community of just two or three people to rely on. It is catastrophic. Sylvia and Ava both have the most unreliable men in their lives, Don and Henry—no one else would want these men! While they are my characters and I love them and understand them, I really do, I wish so much that men like them would straighten up and stop this self-destructiveness. Yet I also see that men like them, men who seem feckless and hedonistic is that they have found a way to bolster themselves in a world that undermines them and makes fools of them with bad fortune. Everyone has that sadness, that thing they do that they know will not end well, but they do it anyway—for example, Sylvia and her emotional eating.

BP: You ask, through this book, what do people do when there’s nothing to do? When the jobs have left, when the families have broken down, when dreams have died.

SPW: When there’s nothing to do, people do the wrong thing. I recently read a New York Times story about a vaping store in Wilkesboro, and part of it involved a man who was going and spending his last dime on some vapes and towing his children with him. The reader comments had this kind of vitriol in them: Why is he doing this why is he wasting his time how dare he bring his children and so forth. I know that is an easier response and I know that it helps to feel anger because anger is cleansing. It doesn’t always leave you with the idea that you have to do something. Much easier than reaching out and helping! It’s so sad to think, with all of the sources of these terrible economics, that people would pile all of this negative emotion on that one person. A man like that, these mistakes take on a much larger portion of his life than they might for someone else. Some people can rebound much better than others. When you’re living on that kind of razor’s edge, you can make mistakes that become catastrophic.

BP: And, of course, not all people of color or people who are underserved are facing catastrophe.

SPW: People like me who grew up in small towns, people who were nerdy, who loved books, who were not part of the urban scene—we existed, too. My parents did not have money but were very intent on books and literature and finding out things. That’s part of the African-American experience, too. I hope that one of the reasons we read is to see something we don’t know, to experience aesthetic recognition, that “Oh my goodness, that’s just like me!” But another reason to read is to see experiences that we do not recognize at all. I’m hoping that there’s some of that in this book for readers

BP: Let’s talk about your “Daisy Buchanan,” Ava, and her isolation. She spends a great deal of time on infertility chat boards.

SPW: Ava has done something a little different in becoming college-educated, and it’s separated her from Pinewood even though she grew up there. She’s having a hard time making and being a friend, a hard time connecting with home even though she’s been there for a while at the start of my novel. I wanted to talk a bit about that kind of thing: How do you make a friend when you become an adult if you’re not part of a church or some other deeply bonded community? That led me to thinking about well, if you didn’t have friends, who would you tell your secrets to? The answer: Online communities. These sites have such a strange and artificial intimacy that I think is fascinating; people tell the most intimate details of their lives to strangers while using these monikers like “Mom2B” and “AngelsinHeaven.” I don’t necessarily think it’s bad. It’s a moment of release for Ava. However, it is a pale substitute for an actual friend, for a real-life connection.

BP: Despite the hard times many of your characters experience, your book has a lot of sly, sweet humor.

SPW: So much of life is flattened out without humor. You absolutely have to have it. My characters all feel it. Sylvia’s not a funny person, but still she has these moments that bubble up. It’s a huge part of the lives of minorities, such an important coping and resistance mechanism, and I felt it was important to represent it in a kind of organic way.

BP: The voice in this book is so different and seamless that it reads as if you wrote it in one draft.

SPW: Oh, no! There were so many drafts, so many drafts! I never know what’s going to happen until I can get really into the mind of the character. I used to write at night and I could write all night sometimes, but after my son’s birth that doesn’t happen anymore. I write in the morning and I really try to focus on one character and sometimes I just write through but it doesn’t work

and that’s OK. With Sylvia what came to me first was her being pregnant and in the doctor’s office. I “met” her back when she was much younger and very large and she had to go to a hotel to see a “black doctor,” not a doctor who was black, but a doctor who cared for black people. Women would have to go to a hotel in Lenore, North Carolina called The Carlheim, and the real-life women who did this have lots of stories of the strangeness and indignity and togetherness of this experience. None of that material is in my novel. But it brought me to an understanding of Sylvia. It took me about seven years to write this book.

BP: Do you think this is an important time for people of color to be writing and publishing fiction?

SPW: I am very hopeful that it’s a moment, because there is a spotlight and with that other voices can be heard. I’m hoping for that. I don’t know. I remember when I first read The Color Purple and Toni Morrison J. California Cooper and Gail Jones but it felt like a blip rather than a movement. So I’m hopeful. I think the past presidential election has shown people there are serious and real divisions in the country. Sometimes we get complacent, black and white people and other POC. Maybe we’re always evolving for the good. There are some things we have to take care of, there are some things you cannot outrun, do not expect to outrun them, they will find you, I’m hoping that this a moment when we will take this to heart. It’s a fascinating time interested to see what happens.

BP: You were once a Jehovah’s Witness. Have you left that church/spiritual practice?

SPW: I certainly feel like a spiritual person, don’t practice a religion any more. I say that not to distance myself from the Jehovah’s Witnesses, but to emphasize that I operate from a hopeful place. I really can’t afford not to be hopeful. I have a seven-year-old and I have to pass a world on to him that he can thrive in and in which things are going to be OK. Being a parent gives me a lot of hope. Dr. King knew he was not going to live after he gave that speech at the Lincoln Memorial. Knowing that, knowing that he still persevered? I can’t afford to give up. 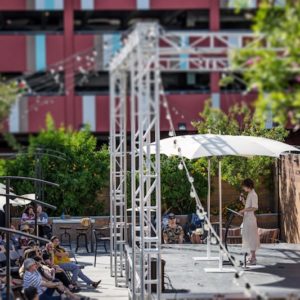 I felt awed by the beauty I was unaware Las Vegas possessed as my Lyft driver pulled into Red Rock Canyon. The endless rock...
© LitHub
Back to top