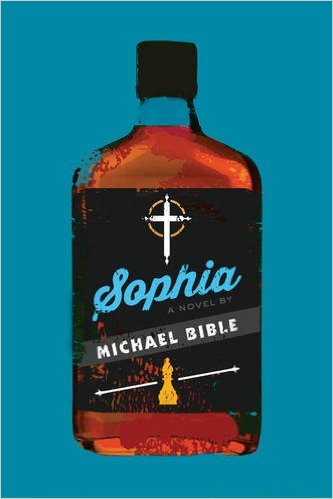 The following is from Michael Bible’s novel, Sophia. The narrator, Maloney, is a wayward minister in love with a parishioner named Tuesday. His sidekick is the chess prodigy Eli, whose brother, Boom, is dying. Bible is originally from North Carolina. His work has appeared in Oxford American, The Paris Review Daily, Al Jazeera America, ESPN: The Magazine, and New York Tyrant.

Eli, everywhere I go, dirty looks. These people that pray in restaurants before their meals. These people with their ideas about ideas. Asking me for forgiveness? And what are these people’s great sins? Men forget to put the toilet seat down. Women use up all the hot water. All domestic hell breaks loose and they’re pounding my door. Keep a clean heart, I tell them. Whatever that means.

Failure is the most interesting trait. Like the story of the serpent and the two orchard thieves. Sometimes you’re like Texas, Eli, one vast contradiction. Sometimes you’re like nothing at all. In the confessional Tuesday says I am emotionally crippled. How can the lamb diagnose the shepherd? These days this preacher could use a nurse. A morphine drip and a kind bedside manner.

The big moon, Eli. The supermoon. The one you’ve talked about for so long. Only happens once every four hundred years and now it’s cloudy. Boom calls and says he’s half in heaven and Christ has sky-blue eyes. He says heaven is 72 degrees and has really good Italian food. Let’s head to the bar with the dueling pianos, Eli. Let someone sing that awful, beautiful song by Billy Joel and weep. I feel I could rob a Dairy Queen right now, but I’m too drunk to drive.

Boom will never go fishing on a lake again. He is close to death but cannot die. He has been dying for fifteen years. I was asked to give him ease in his final months but he just keeps on dying.

Seize the day, Eli. Break a leg. Put the pedal to the metal where the rubber meets the road. Pull my chain. Pull a fast one. Pull the wool over my eyes. Put a cork in it. Buy the farm. Bite the dust. Eat my dust. Kick the bucket. Sharp as a tack. Stiff as a board. Sweating blood. Sweating bullets. Happy as a clam. Raining cats and dogs. Buckle up. Buckle down. Play with fire. Go with the flow. Easy come, Eli, easy go.

Things are so bad and then I remember the secular saints: Beethoven, van Gogh, the drummer from Def Leppard.

I am trying to keep to the root of things. There’s spit on the corners of my mouth. I’m reciting Lucky’s speech from Waiting for Godot.

It’s OK that you’re going mad, you say, Eli. But can you stop doing it so close to me?

Sports of all sorts, I say. All kinds of dying flying sports.

St. Simon is killed with a saw. At his wedding Jesus turned water into wine. His screams are heard a mile away.

Eli, I find you drunk and stumbling near the fire station.

I can’t make the parade tonight, you say.

The parade was yesterday.

Either way I can’t make it.

Tuesday has run away with a jam band called The String Cheese Incident. She is selling something named heady goo balls in the parking lot. She loves a man named Marlin, a roadie.

I’m in the high mountains, she says, where earth meets sky.

Do you remember the restaurant we used to go to? The one with the stuffed polar bear?

The white roses outside the lady chapel are wilting from too much rain. Boom calls and says he has a good view of a robin nesting outside his window. He watches the mother vomit food into the baby’s mouth. Sometimes Boom says he can only smell. On his worst days, he says, olfactory is all he’s got. Then his senses will come rushing back strangely. I can feed him a peppermint and he can hear again. I can play him Beethoven and his skin will tingle. But the sound of a sneeze can put him in a coma for days. A full episode of Wheel of Fortune is a miracle. He is hoping in the spring he will see a baby robin fly.

Eli, let’s spend the better part of the afternoon drinking gin and playing chess. Two lost gentlemen seeking the daily fluff. We are on your back porch overlooking the cotton when two Canadians land a balloon in the field. They have champagne. We toast that they are still alive after their rough landing. We toast that you are Eli and I am Maloney. We toast that everyone alive is still alive.

St. Sebastian is tied to a tree and archers shoot him full of arrows. He is buried, rises from the dead, heals a woman. Then is beaten to death by an emperor and left in a ditch.

Pretty good story if it were true, you say, Eli.

Darling pours me black coffee at the Starlight. She thinks I should spend more time on the water. That is where I am happy.

Have you ever been to Greenwich Village, she says. That’s

where all the poets lived.

Once. Long ago, I say. Before the Lord got me.

Eli, I want to sail around the horns and never quite arrive at a final destination. We can visit islands so remote they don’t have names. Live among natives. Yet as we age the possibilities grow less endless. The windows of opportunity don’t slam, they shut quietly in the dark. We’re always another cup of coffee away from the end. I’ll be damned if my adventures are spent sitting in this boat. We are out floating in space, the earth our ship. Riding round the big star. There is too much chattering about the end and not enough shutting up about the now. Out on the sea, Eli, me and you and the ones we love. We could leave the harbor with a little push.

Eli, we snort heroin and go to the bookstore. You ask for art books. I want abstract art, you say. I only like art that is abstract. I give you a book. Is this art, you ask. I don’t know, I say. This is fantastic, you say. This is fantastic! I show you another book and you ask, Is this art? And I say, I don’t know. And you say, This is fantastic! The girl at the counter (the one with nice breasts) says, You might like Dalí. Dalí was a pornographer, you say and throw the book in her face. On the ride home you say sometimes I remind you of a panther.

Tuesday overdosed during the fifth encore of the Red Rocks show. I pick her up at the airport and she looks clear after her hospital stay. The wizards are at the back of the cotton field throwing the football. The Rebels lose to Bama.

Eli, can you clear the hospital room? Boom and I need to speak.

What do you want done in your absence, I ask him.

I want you to take my saddle off the wall and strap my bones to my pony and set her free, Boom says.

I was happy in my life, he says, there was a lot of pain but I enjoyed that, too.

There are reports of Satan in the physical world, Eli. A cub scout saw eerie boot prints near the roller skating rink.

Was there a smell of patchouli and blood, I ask the scout.

It was exactly that odor, sir.

Never cross your heart and hope to die, I say. Always step on a crack. You can never break your mother’s back.

I carry this here pink foot of a rabbit for luck and good graces, he says.

I give him fifty bucks and send him on his way.

Eli Nono found your bike in a ditch.

She’s an artist, you say.

Are you sleeping with her?

Maybe I am and maybe I am.

St. Juan is scourged and pressed to death with weights. His brothers, Felix and Philip, are beheaded. Their mother, too, with the same sword.

Boom dies on a Friday, like Christ. We send him off in the following way: I hire the Confederate drummer boy from the local Civil War reenactors group, he plays light taps throughout. I give a reading from the Holy Bible. Valley of the shadow, etc. We strap Boom to the pony. I give the Eucharist. Weed brownies as the body, moonshine as the blood. I shoot a pearl-handled pistol in the air. Eli, you slap the pony and it runs toward the moon.

From SOPHIA. Used with permission of Melville House. Copyright © 2015 by Michael Bible.

The Staff Shelf: Prairie Lights When we walk into a bookstore, the first place we go is the staff recommendation shelves—it’s how you get a quick sense...
© LitHub
Back to top