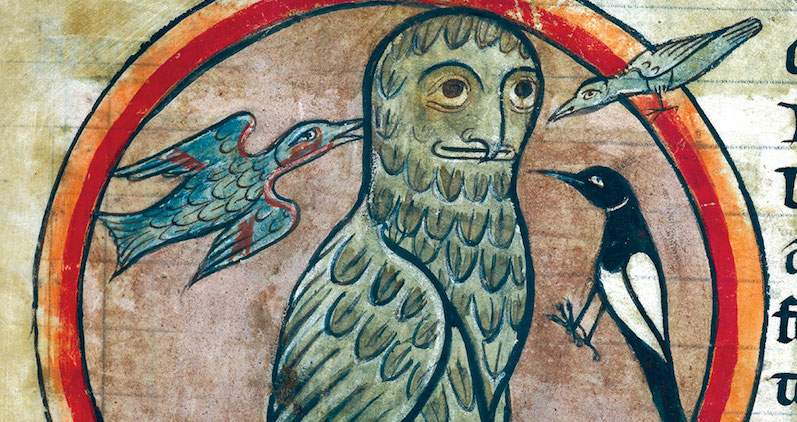 David Crystal on Quarrels, Secrets and Other Exchanges

Records of spoken dialogues really take off in the Middle English period, which is conventionally dated from the 12th century until the mid-1400s. One of the most famous examples is an early 13th-century quarrel, in rhyming couplets, between an owl and a nightingale, as overheard by the poet. Here is a translation of their opening exchange, set as prose. The nightingale speaks first.

“Monster, you fly away. I feel sick when I see you. Indeed, because of your ugly face I very often have to stop singing. My heart fails and my tongue falters when you thrust yourself on me. I would rather spit than sing about your foul howling.”

The owl waited until it was evening. She couldn’t stay silent any longer, for her feelings were so powerful that she very nearly stopped breathing, and after a long time she spoke out.

“How does my song seem to you now? Do you think that I can’t sing because I can’t do twittering? You often make me angry, and say reproachful and shameful things to me. If I held you in my talons—and it could be that I might, if you were out of your tree—you’d sing a different tune.”

The nightingale answered: “If I stay out of the open, and protect myself against the hard weather, your threats don’t bother me. If I keep myself in my hedge, I don’t care at all what you say.”

And so the row continues, for a further 1,700 lines, before they agree to have their arguments judged by a Master Nicholas of Guildford, who lives in Portesham in Dorset—presumably, the poet. The birds fly off to find him, but we never learn the outcome.

This was the first of many quarrels recorded in Middle English literature. The most ferocious were the harangues known as flyting, from an old verb flight, meaning “to scold.” The word is still heard in northern English dialects and in Scotland, and it is in Scotland that the best literary examples survive, for in the late Middle Ages several Scottish poets engaged in formal exchanges of poetical invective, much enjoyed at court.

Real conversations begin to appear in the prose narratives of the Middle English period.

A modern “war of words” equivalent is the battle rap. But do contests of this kind deserve to be called conversations? This notion of a cooperative endeavor is perhaps unconsciously reinforced by the etymology of con “with” (as in connect, consensus, converge…), so that, when the parties in an interaction are no longer maintaining some sort of shared intent, the word feels inappropriate.

Certainly, everyday usage seems to support such an interpretation. The common expression “the conversation turned into…” usually collocates with “row, quarrel, argument, debate” and suchlike, as in this newspaper report (in the Slovak Spectator, May 2018) about a journalist’s experience:

While she thought it would be a friendly conversation to help their investigation into the murder, when she arrived at the police station, the conversation turned into a hostile interrogation.

I can’t imagine anyone wanting to describe a debate or a quarrel as a “conversation.”

Real conversations begin to appear in the prose narratives of the Middle English period. There are several in Thomas Malory’s Morte d’Arthur, for instance. The conversational style is apparent from the very opening chapter (here shown in modern spelling and punctuation):

Then for pure anger and for great love of fair Igraine the king Uther fell sick. So came to the king Uther Sir Ulfius, a noble knight, and asked the king why he was sick. “I shall tell thee,” said the king, “I am sick for anger and for love of fair Igraine, that I may not be whole.”  “Well, my lord,” said Sir Ulfius, “I shall seek Merlin, and he shall do you remedy, that your heart shall be pleased.”

So Ulfius departed, and by adventure he met Merlin in a beggar’s array, and there Merlin asked Ulfius whom he sought. And he said he had little ado to tell him. “Well,” said Merlin, “I know whom thou seekest, for thou seekest Merlin; therefore seek no farther, for I am he; and if King Uther will well reward me, and be sworn unto me to fulfil my desire, that shall be his honor and profit more than mine; for I shall cause him to have all his desire.”  “All this will I undertake,” said Ulfius, “that there shall be nothing reasonable but thou shalt have thy desire.” “Well,” said Merlin, “he shall have his intent and desire.  And therefore,” said Merlin, “ride on your way, for I will not be long behind.”

Other early examples can be seen throughout Thomas Deloney’s novel Jack of Newbury (1590s). In the opening chapter, John Winchcomb has a conversation with his master’s widow. She’s taken him into her confidence, and opens her mind to him about her suitors in a very natural-sounding conversation that moves along at a good pace:

“Although it becometh not me, your servant, to pry into your secrets, not to be busy about matters of your love, yet for so much as it hath please you to use conference with me in those causes, I pray you let me entreat you to know their names that be your suitors, and of what profession they be.”

“Marry John,” saith she, “that you shall, and I pray thee take a cushion and sit down by me.” “Dame,” quoth he, “I thank you but there is no reason I should sit on a cushion till I have deserved it.” “If thou hast not thou mightest have done,” said she, “but faint soldiers never find favor.” John replied “That makes me indeed to want favor, for I durst not try maidens because they seem coy, nor wives for fear of their husbands, nor widows doubting their disdainfulness.” “Tush John,” quoth she, “he that fears and doubts womankind cannot be counted mankind, and take this for a principle: all things are not as they seem. But let us leave this and proceed to our former matter. My first suitor dwells at Wallingford, by trade a tanner, a man of good wealth, and his name is Crafts; of comely personage and very good behaviour; a widower, well thought of amongst his neighbours. He hath proper land, a fair house and well furnished, and never a child in the world, and he loves me passing well.”

“Why then, dame,” quoth John, “you were best to have him.” “Is that your opinion?” quoth she. “Now trust me, so it is not mine, for I find two special reasons to the contrary. The one is that he being overworn in years makes me overloath to love him, and the other that I know one nearer hand.” “Believe me dame,” quoth Jack, “I perceive store is no sore, and proffered ware is worse by ten in the hundred than that which is sought. But I pray ye, who is your second suitor?”

And so the story begins, in a conversational style that could have come from any modern novel. The realism in these extracts comes partly from the colloquial tone introduced by interjections such as marry and tush, and such rhetorical expressions as believe me, I pray ye, trust me, and why then. And it’s a short step from here to the full-scale dramatization of everyday conversation that we encounter in the same decade in the plays of Shakespeare and his contemporaries.

The quarrelling examples in this chapter raise the important point that came up in relation to greetings: what counts as a conversation? Evidently there are some types of dialogue that people would exclude from the notion, or, at best, consider them marginal. Are there any others? 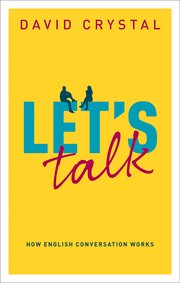 David Crystal is known throughout the world as a writer, editor, lecturer, and broadcaster on language. He has published extensively on the history and development of English, including Begat: The King James Bible and the English Language (2010), The Story of English in 100 Words (2011), Spell It Out: The Singular Story of English Spelling (2012), Wordsmiths and Warriors: The English-Language Tourist's Guide to Britain (with Hilary Crystal, 2013), The Oxford Dictionary of Original Shakespearean Pronunciation (2016), and The Story of Be: A Verb's-Eye View of the English Language (2017).

Peter Kimani on the Disruption the Pandemic Has Created in Kenya 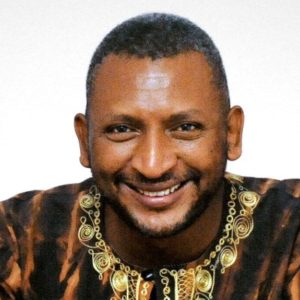 Peter Kimani on the Disruption the Pandemic Has Created in Kenya