In December, as I was compiling the biggest nonfiction bestsellers of the last 100 years, I noticed a diet book pop up multiple times in the 1920s: Lulu Hunt Peters’s Diet and Health: with The Key to the Calories. Though it was first published in 1918, it hovered in the middle of the list for several years and managed to become the bestselling nonfiction book in the country for two years running: 1924 and 1925. So, I investigated.

Lulu Hunt Peters was a doctor with a popular newspaper column, Diet and Health, which she turned into a book (turns out this isn’t exactly a modern phenomenon). Diet and Health was the first diet book to popularize the now-ubiquitous technique of counting calories for weight loss—and not for nothing, in it Peters also argues that dieting is a patriotic act, to which I say: ok. It was an instant hit, and became the first weight loss book to make the national bestseller lists. After reading some of it, I can see why—and it’s not because she makes me feel patriotic. Frankly, she’s a hoot, and so are the illustrations, which are credited to “The Author’s Small Nephew, Dawson Hunt Perkins, The little rascal.” (Imagine a diet book illustrated by someone’s nephew these days. ) So for your own amusement, enjoyment, and/or New Years resolution-ing, I have reproduced the author’s introduction as well as the chapter on exercise, which I thought was among the funniest. I mean, I never knew that hair-brushing counted as exercise, but boy am I glad I do now. 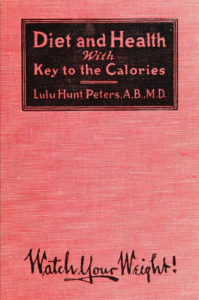 I am sorry I cannot devise a key by which to read this book, as well as a Key to the Calories, for sometimes you are to read the title headings and side explanations before the text. Other times you are supposed to read the text and then the headings. It really does not matter much as long as you read them both. Be sure to do that. They are clever. I wrote them myself.

I have been accused of trying to catch you coming and going, because I have included in my book the right methods of gaining weight, as well as those for losing weight. But this is not the reason—though I don’t object to doing that little thing—the reason is that the lack of knowledge of foods is the foundation for both overweight and underweight.

I did want my publishers to get this out in a cheaper edition, thinking that more people could have it, and thus it would be doing more good; but they have convinced me that that idea was a false claim of my mortal mind, and that the more you paid for it, the more you would appreciate it. I have received many times, and without grumbling on my part, ten dollars for the same advice given in my office. Perhaps on this line of reasoning we should have ten dollars for the book. Those of you who think so may send the balance on through my publishers.

It is practically impossible to reduce weight through exercise alone, unless one can do a tremendous amount of it. For the food that one eats is usually enough to cover the energy lost by the exercise. 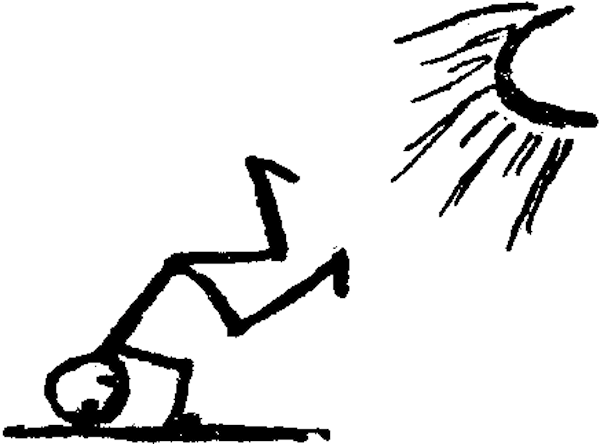 Light On Your Feet

However, exercise is a very important feature of any reducing program; not because of the fat that is burned up in the exercise—and there is some burned—but for the reason that it is necessary to keep one in a healthy condition. The muscles, the internal organs, the bones, the brain, are all benefited—in fact, the entire system.

The exercises described hereinafter will help make you fat or thin, and they will keep you supple, graceful, and light on your feet, so that when I tell my husband that he must dance with you, Madam, he will not say, “Nothing stirring,” and when you, Professor, ask me to dance, I will not curse the day I was born.

Warning: If you have not been accustomed to exercise, I warn you to take up only one or two at a time and do each one a few times only. You will be atrociously sore, and you will realize that you have muscles of which you wotted not.

However, persist, if you are sure there are no organic reasons why you shouldn’t—such as a weak heart. (In case you are very much overweight, I think it advisable to wait until you have reduced somewhat.)

It is splendid if you can belong to a gymnasium or to a physical culture class, but ten to fifteen minutes’ systematic daily exercise practiced with vim, and each set followed by deep breathing, will do more good than a gymnasium spasmodically attended. Brisk walking with a long stride isn’t so bad; in fact, if taken with a very long stride it will twist ‘most every organ you have in your body.

There are hundreds of exercises you can take. If you will notice little rascal’s illustrations you will find many good ones. Those illustrating the beginning of this chapter are excellent.

If possible, it is best to take the exercises on arising in the morning, but if you have a household to care for you may not be able to do so. For those who have to do their own work, it may be well to do the work first. You can do it in half the time if you plan it carefully and speed up. (This advice is not for my thin friends; their speedometers register too high already.) It does not matter so much when the exercises are done as that they are done, and done every day for the rest of your life, with the possible exception of two or three days a month.

Gallstones, permanent stiff joints, and other little things like that will have a hard time forming.

(The services of my noted artist I was able to obtain with great difficulty, as he was engaged in the more important work of making a swagger stick. I finally secured him by the promise of an ice cream cone and twenty-three cents to go with his two cents so that he could buy a Thrift Stamp. He is given due credit on the title page.)

These exercises executed with vim, vigor, and vip—deep breathing between each set—will take ten to fifteen minutes. Re-read my warning. 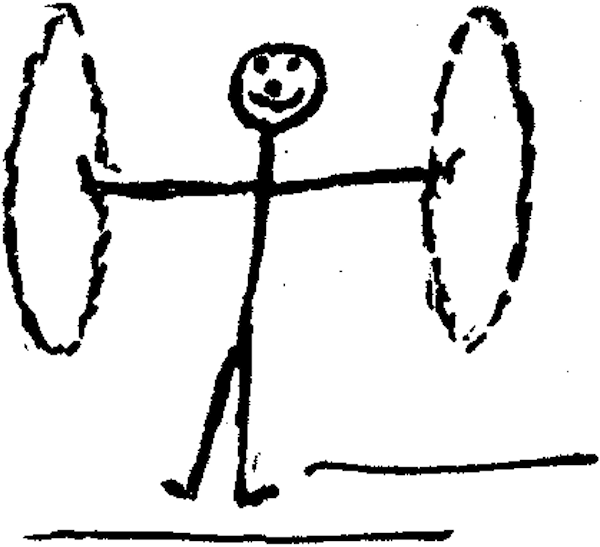 1. Feet together, arms outstretched, palms up, describe as large a circle as possible. Fine for round shoulders and fat backs. Do slowly and stretch fifteen times. Smile. 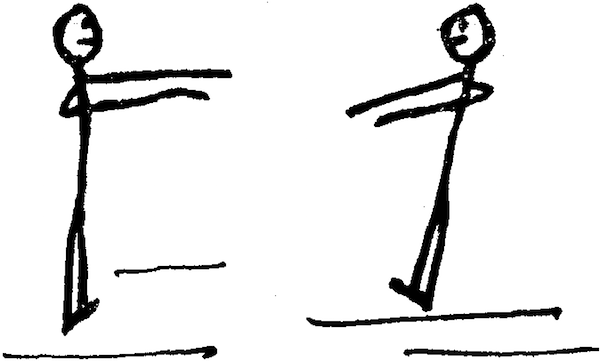 2. Arms outstretched, swing to right and to left as far as possible at least 15 times each. 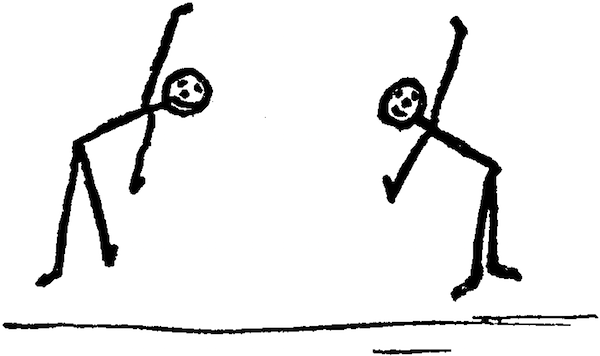 3. Bend sideways, to right and left, alternately, as far as possible at least 15 times each. 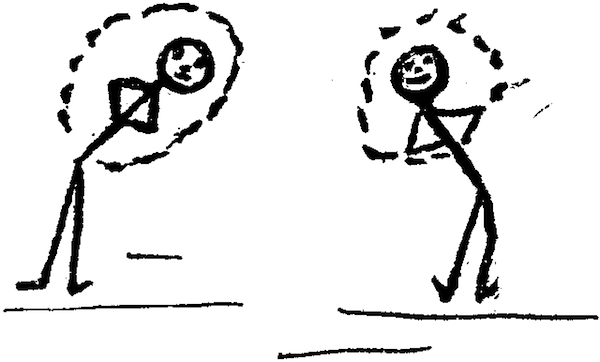 4. Revolve the body upon the hips from right to left at least 10 times, and left to right the same. 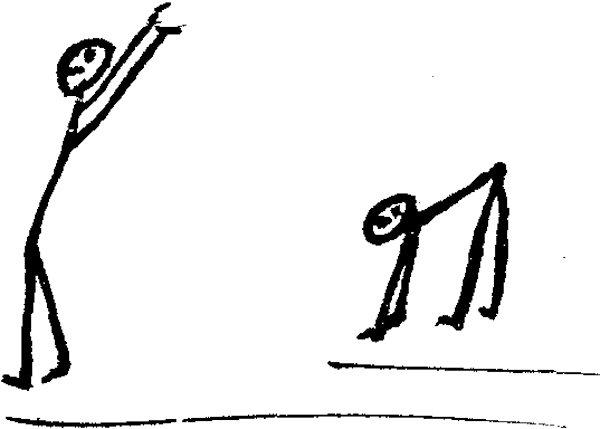 5. Bend and touch the floor with your fingers, without bending your knees, at least 15 times. 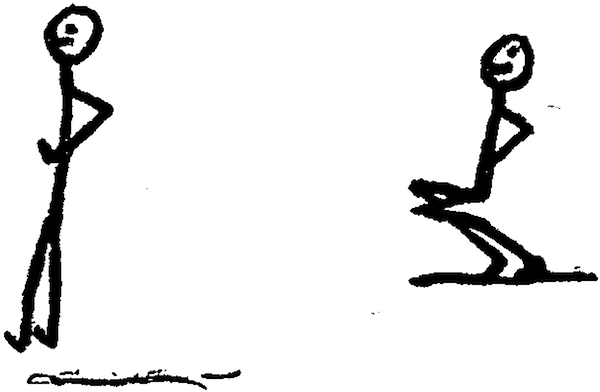 6. Knee-bending exercise, at least 15 times. This is hard at first.

7. Hand on door or wall, swing each leg back and forth at least 15 times. To the side 15 times. Turn head, raise arm, and tense both. 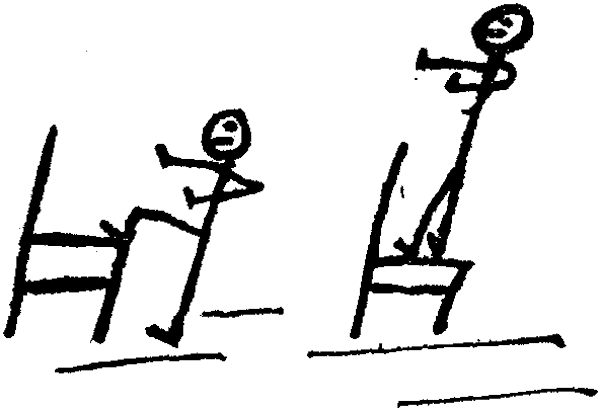 8. Step on chair with each foot at least 10 times. This is good for calf and thigh muscles. After a while you won’t look as though you needed a derrick to get onto a street car.

9. Arms on sides of chair. Come down and touch abdomen. Fine for back and abdomen. Fifteen times. 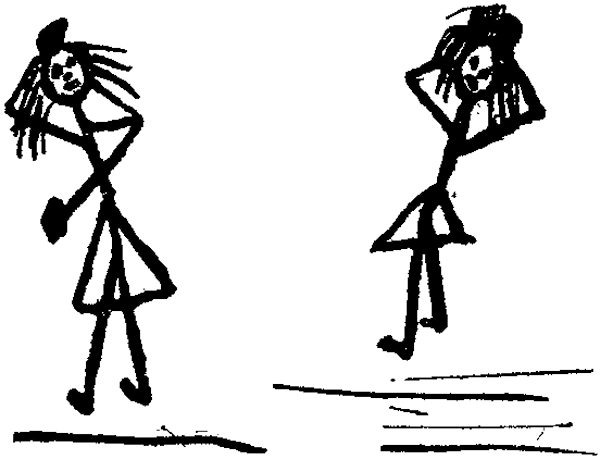 10. Brush hair vigorously at least 200 double strokes all over the head, N.S.E.W., using a brush in each hand.

(Military brushes are best. If you can’t purloin a set of your husband’s, two ordinary brushes will do.) Now shake out the loose dandruff. This is one of the best exercises and must not be omitted, for it accomplishes two purposes. It is a good arm and chest exercise, and it gives a healthy scalp absolutely free from the dammdruff.

This for a few minutes, followed by this, the hot preferably at night. 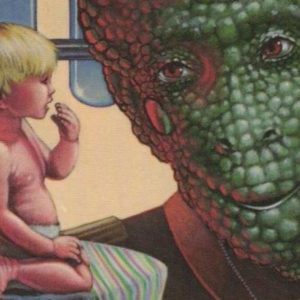 Can a language be designed specifically to express the thoughts and feelings of women? In 1984, the linguist Suzette Haden...
© LitHub
Back to top
Loading Comments...