So You’ve Decided to Write: The Writer I Never Had to Edit

Terry McDonell on the Value of Leaving Well Enough Alone

I called Tom McGuane in Livingston, Montana, when we were launching Outside magazine, out of the Rolling Stone offices in San Francisco. I had landed the job saying I would get interesting young novelists to write about the natural world, and he was at the top of my list.

“You probably don’t want anything about hunting,” McGuane said.

He was right, but I said hunting would be fine, wonderful really, “whatever you want to write about.” I had read his novels and figured whatever he wrote would be literary and ambitious, and just getting him in the inaugural issue would send the right signals. The problem was that hunting was looked upon as animal murder by most of my new colleagues, as well as by the readership the Rolling Stone circulation department had identified as the ideal demographic for Outside.

I didn’t know yet that “biting the hand that feeds you” was at the bottom of Tom’s work philosophy—which in retrospect seems related to how we didn’t talk about money except when he said, “Your top rate, right?” I was grateful to get off easy. We were paying a dollar a word, and I was embarrassed saying it out loud. Other magazines—Esquire, the New Yorker, Rolling Stone—were paying at least double that. Such specifics seemed like the last things on his mind.

That first piece Tom wrote for Outside, “The Heart of the Game,” was an almost cinematic contemplation of hunting that snuck up on you, a technique I understood later was instinctive to him. The first sentence:

Hunting season in your own back yard becomes with time, if you love hunting, less and less expeditionary. This year, when Montana’s eager frosts knocked my garden on its butt, the hoe seemed more like the rifle than it ever had before, the vegetables more like game.

At first read, it seemed confusing. I told Tom I was thinking the piece should start with the second graph, which began, “My son and I went scouting before the season and saw some antelope in the high plains foothills of the Absaroka Range.” All we would have to do, I said, is add hunting before season.

“I wrote it on purpose,” Tom said.

“Well . . .” I knew that, of course, but had never thought much about writers’ intentions. I was proud of making quick decisions about ledes. I could work through my reasoning—something about telling the readers where you’re taking them, getting right to it, whatever it happened to be. But what if I was unthinkingly undermining the ambition of the writer? An editor could do nothing worse.

“And you asked for it,” Tom added.

Tom made his killing shot in the piece with the buck “bounding toward zero gravity, taking his longest arc into the bullet and the finality and terror of all you have made of the world, the finality you know you share even with your babies and their inherited and ambiguous dentition, the finality that any minute now you will meet as well.” I was stopped cold by ambiguous dentition and have never read anything like it.

The piece ended with Tom dressing out the buck he had hung over a rafter in his woodshed with a lariat:

I could see the intermittent blue light of the television against my bedroom ceiling from where I stood. I stopped the twirling of the buck, my hands deep in the sage-scented fur, and thought: This is either the beginning or the end of everything.

I didn’t change a comma, top to bottom, and the piece ran in the first issue and set the literary tone for the magazine. Tom wrote a dozen pieces for Outside over the next couple years, lifting the magazine with his tight control of language, humor and what one critic called his mastery of “macho angst,” whatever that was.

“Tom McGuane’s uncanny language and surprising specifics will make you a better writer just by reading his sentences.”

After Outside, I edited Tom at Rocky Mountain, Smart and Esquire, but then we didn’t work together for more than ten years, until he wrote a piece for me at Sports Illustrated. No one was better at decoding the redeeming value of sporting ritual, and Tom was interested in writing about fishing again—not for his beloved trout or tarpon but for snook. Snook, he explained, were covert, suspicious and sneaky even if they did crash bait. Sleazy was another word he used. Snook humiliated anglers. “Hard to see, hard to hook, hard to land and, because they are so good to eat, hard to release.” Tom always had trouble catching them. Plus: “When they’re at the threshold of death, a translucent window appears in the top of their heads.” So the 28 million or so NFL-obsessed SI readers got close to 8,000 words on snook.

But not just snook. Toward the end of the piece Tom wrote that he had “once had an episode of serious depression, and its onset was marked by a loss of interest in fishing.” This was the sort of hairpin turn he was so good at, as if he were driving with one of those spinner “suicide” knobs from the 1950s on the steering wheel of his prose. He wrote that he marveled at people…

…discussing depression, gnawing the topic of their own malaise like dogs on a beef knuckle. My experience of it was a disinclination to speak at all. I had the feeling of being locked in a very small and unpleasant room with no certainty of exit, and I recall thinking that it was the sickest you could possibly be and that my flesh had been changed to plaster. My business at the time was flight from expectations.

He had knocked me over again, and I read on as he…

…thought of incessant-angler pal and novelist Richard Brautigan, who relinquished his fly rod as he spooled up for suicide. Fishing, for many, is an indispensable connection to earth and life, and it matters little that the multitude that practices it is incapable of translating its ambiguities to another idiom.

That’s not writing you edit.

When I read a Thomas McGuane story now, mostly in the New Yorker, his talent spins me like it did when I first read Ninety-two in the Shade. It’s all there, the uncanny language, the surprising specifics that made me a better editor just by reading his sentences. Before I had the chance to edit any of the fine writers I worked with later, that first go-around with Tom set me straight.

There's No Such Thing As Historical Fiction 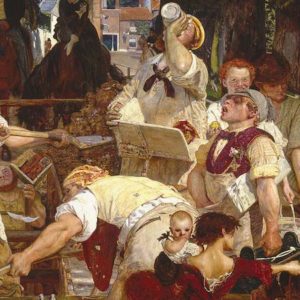 There's No Such Thing As Historical Fiction

It might sound odd to say it, but there is no such thing as historical fiction. And yet if you write a literary novel set in the past,...
© LitHub
Back to top
Loading Comments...