“I long to hold the poetry editor’s penis in my hand.”

An old editors’ joke is that the definition of a good editor is a person with no friends—the result of dealing honestly with writers, editing them with “a firm hand and terrifying clarity.” This still gets a laugh because it’s such posturing. To be a good editor you need friends, or at least writers who like you enough that you can talk them into doing what you want them to do. At least that was a lot of the job for me.

But as admirable as it is to be honest and decisive, enemies can be made stupidly and by accident, and terrible mistakes test friendships. George Plimpton, as editor of the Paris Review, once turned down a story from his childhood friend Peter Matthiessen, calling it “risible”—something he regretted as long as they lived. A friend of mine from college became outraged after I rejected one of his poems at Rolling Stone. I told him the magazine didn’t run poetry anymore, which it didn’t. He never spoke to me again.

The second-best answer an editor can give a writer is a “fast no.” Most editors are not very good at this and leave writers hanging, sometimes for months. No response is worse, of course, and that’s common, too. The arrogance drives writers crazy with humiliation. Some very good editors don’t care, but the best ones do.

Some editors write thoughtful, useful emails. Most toss off an easily misunderstood line or two, often beginning or ending with how busy the editor is. This preoccupation with their own time (“things are crazed here…”) is a bridge to silent rejection, a brutal kiss-off engineered to shield the editor from further correspondence or, worse, becoming a target of TME (too many emails) because he or she tried to point out to overly sensitive, obstinate writers the specifics of how their manuscripts fell short.

You never hear editors talking about how disturbed and insecure writers might become as a result of relentless rejection, living every day with what James Salter called “the feeling of injustice.” It’s more fun for editors to characterize their jobs as overseeing petting zoos full of needy misfits and narcissists, a point of view that is always amusing to other editors but infuriating to writers. Every writer, of course, has very specific ideas about editors. But writers seldom get the last word on anything.

“The second-best answer an editor can give a writer is a fast no. Why are editors so lousy at this?”

My favorite exception came from Francesca Bell, a Native American poet who dropped out of middle school but found a way to crack the poetry establishment and its network of small magazines. In 2013, Bell had this poem published in Rattle:

and tell him personally,
I’m sorry, but I’m going
to have to pass on this. Though your piece
held my attention through the first few screenings,
I don’t feel it is a good fit for me at this time. Please know it received my careful consideration. I thank you for allowing me to have a look,
and I wish you
the very best of luck placing it elsewhere.

Counterintuitive tip: Not that long ago a writer submitting a story to a magazine was asked to enclose a stamped, self-addressed envelope. As quaint as envelopes sound, the temptation to ignore email from unknown writers can make sending a traditional letter shockingly more effective—nobody gets mail like that anymore. 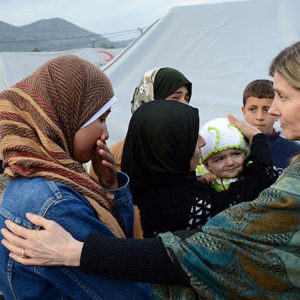 I was supposed to be writing about a refugee in Istanbul. Then she disappeared. Most of them do disappear now and again....
© LitHub
Back to top
Loading Comments...