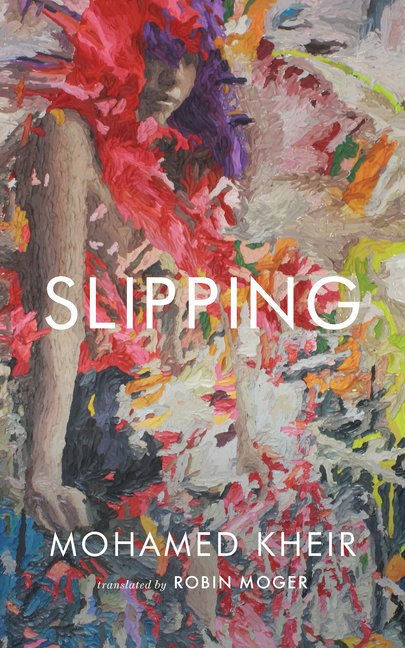 The following is excerpted from Mohamed Kheir's novel, Slipping, translated by Robin Moger. Kheir is a novelist, poet, short story writer, journalist, and lyricist. His short story collections Remsh Al Ein (2016) and Afarit Al Radio (2011) both received The Sawiris Cultural Award. Moger is a translator of Arabic to English currently based in Cape Town, South Africa. His translations of prose and poetry have appeared in Asymptote, Words Without Borders, and The Washington Square Review, among other places.

We walked on water and met a stranger

Where the corniche wall ran out, a great tree hooped over to drink from the river. Beyond the tree there was nothing: nothing between us and the water.

We walked by the light of the stars, to our left a scattering of buildings, silent as though abandoned and none more than two stories high. There was the soft howling of dogs in the distance, and the rustle of small things, some living, from the ground. All of a sudden, Bahr halted and pulled me to one side, right to the lip of the riverbank. For a moment it was as if he wanted me to leap into the Nile, but then I saw a flight of stone steps in the starlight, appearing as if from nowhere: narrow, running from the embankment where we stood down to the water’s surface, to where there was no jetty, no boat, no hut, nothing: as though inviting us under.

Without saying a word, Bahr cautiously began his descent and I followed. When he came to the second to last step, just before he reached the water, he sat down. I took the step above him, and we leaned back against the wall. Bahr said, “It was against a wall like this, on steps like these, that I kissed a girl for the first time.”

I listened, waiting for him to go on, but he was done. In that silence it felt as though the stars were humming for us, lullabying, soothing us to sleep.

Out in the heart of the river’s darkness there was a movement, and we sat up, suddenly alert. Then, to our astonishment—or at least, to mine—we saw him: a man coming across the river, walking on water. Bahr got to his feet. “Now,” he said, placing his feet on the final step so the water lapped at his shoes. Then he stooped and slipped them off and, without turning around, told me, “Take off your shoes, Seif.”

The man drew closer. He was wearing a robe with the hem held up over his knees and, like Bahr, seemed to be holding shoes or slippers in one hand. He stepped carefully, and I could see that with each step the water just covered the round of his heel.

When the man reached us he stopped. “Assalamu aleikom.” We returned the greeting, and then, Bahr shrinking back to give him space, he carefully placed his foot on the bottom step. He examined us for a moment, and it was as though he were on the verge of asking us something, but he seemed to reconsider, and climbed past us to the top of the riverbank—the height of a roof above us—and wandered away.

Now Bahr extended a foot and placed it on the face of the river, into which it sunk until the water rose over the heel, exactly as it had on the feet of the man in the robe. He set the second foot beside the first, took a step, and nodded. Smiled.

My bare sole descended a few centimeters through river water and came to rest on a slippery surface. Later, I would learn, that for a period just before dawn when the dam’s floodgates upriver were closed, the water level would drop and the river thin. At some point, the locals had worked out that for those few minutes a raised stretch of riverbed was brought right to the surface and, in that brief interval before the floodgates reopened and the raised bed sank back beneath the rising water, they could use it as a shortcut. They’d walk from dry land to dry land seeming, to those not from this place, like prophets or saints: striding splendidly yet humbly over the waves.

As I dipped my foot to follow Bahr I knew none of this.

I went carefully, watching the Nile’s gentle waves in the moon’s light and trying to make out the sound they made, trying to remember the particular word for that sound. Was it ajeej? Haad? What had Alya called it? I tried to picture her saying the word and then imitating the sound. Singing it.

This was long before Bahr. I had awoken after a night spent in a friend’s apartment, to find that my friend wasn’t there. Not to say that I felt any of the fleeting trauma of opening your eyes somewhere unfamiliar—no: it was with a sense of belonging that I got up and moved through the apartment in search of the bathroom. Which is when it reached me—the sweet strong sound of singing from somewhere beyond the living room.

A woman’s voice, soft but with breadth, like an old-time dive-bar diva. And faint, too, like a murmur or a shifting of wings. Half-awake and half-bewitched, I followed the line of the song, and when I came to the kitchen doorway I stopped and stood, watching her.

She was standing there, illuminated by the light from the window: of average height, broad, wide-eyed, red-haired. She was wearing a white robe, a man’s robe that looked big on her, one hand holding the hem while the other gently swirled a kanaka over a low flame. She smiled, as though expecting me.

One slow nod and I had forgotten the world outside.

When, later, I’d try to remember the song Alya had been singing in the kitchen that morning I would fail, and when she told me she couldn’t remember either, I’d tell myself that surely she must know, that she couldn’t be trying hard enough. But I do recall the strange murmur she made as she was humming or breathing the tune; a sound as familiar as the faint rippling of the river beneath my feet. And I recall what she told me when I asked her what it was.

Her mouth to my ear: “Close your eyes, Seif.”

Her lips brushed my lobe and she hummed, and then there was the sound of waves surging. I could smell the sharp salt tang of my adolescence in Bahri. The days we used to take off up to Alexandria on the six a.m. train, trying to chat up pink peasant schoolgirls riding between their Delta towns—the girls crammed and jostling the length of the packed wooden benches, wedged against the broken windows—and at the end of the line, with the last of them gone, getting off at Sidi Gaber and taking the streetcar to Al Ramal.

“The sound of waves breaking against each other.”

And then, to my astonishment, I heard the sound of the high crashing waves in whose clothes-soaking spray we used to delight. And I lifted my head, opened my eyes, and looked at her.

“Everything.” She smiled. “All the sounds.”

Himar: the sound of falling rain. Ajij: the sound of flame. Flutterings, tricklings, grazings, trillings. Sounds I didn’t know had names, names I didn’t know had sounds, and Alya knew every one, could sing them all. In the morning, humming; in the evening, singing; at midday taking me on a journey through the sounds of every wave there was. But the word for the sound of the river over which we walked? That, I could not remember. I watched Bahr climbing a flight of steps on the far bank. He turned back to me and asked, “Are you ready to see more?”

Soneela Nankani on the Path That Led Her to Audiobook Narration 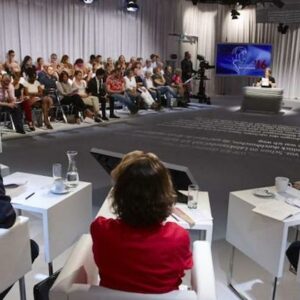 This prestigious German TV writing competition is . . . very German. Recently I was thrilled to learn of Writers Unplugged, a writing show in Bhopal, India where local writers compete in challenges....
© LitHub
Back to top