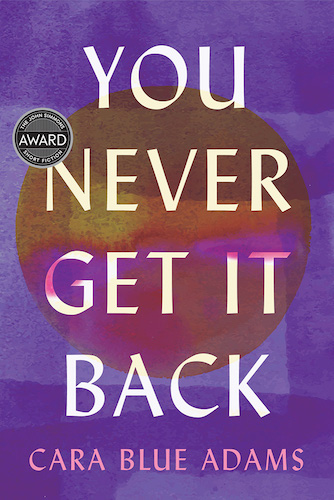 The following is excerpted from Cara Blue Adams' short story collection, You Never Get It Back, which won the John Simmons Short Fiction Award. Adams' stories and essays have appeared in many magazines, including Granta, The Kenyon Review, Tin House, and Ploughshares. She has been awarded the Kenyon Review Short Fiction Prize, the Missouri Review Peden Prize, and the Meringoff Prize in Fiction. She is an associate professor of creative writing at Seton Hall University and lives in Brooklyn.

My week had been quiet. It was March, not cool, but not hot, and everything getting ready to bloom. Saguaros, green and erect, stretching up from the dun-colored desert. No other houses in sight. His nearest neighbor, a mile down the road. The first day, I had seen a rattlesnake. I’d called the dogs back just in time. It took me a few minutes to stop shaking. The night before this, my ex-boyfriend had emailed me. Not Javier, not Michael, but the person for whom I had once lain awake all night, unable to sleep, and eventually walked myself to the hospital, saying that I thought I was losing my mind. I’d waited in a cold room in a robe, crying, for an hour. No one came. Eventually, they let me leave.

He had dreamed about me, he wrote, and he missed me still. In two months, he was getting married.

That last part, he didn’t tell me; that, I knew from looking him up online.

His fiancée had registered for plain white towels.

The first time he kissed me, I was twenty-one. He looked so vulnerable, so given over to happiness. So—I don’t know how else to say this—so mortal.

Who needed that? Not me.

On Sunday afternoon, I stood on the roof deck. The deck overlooked a wild, beautiful stretch of Sonoran desert. Coming from the Northeast, the landscape awed me still: purple mountains and vast sky and undulating waves of light, dry earth. Beside me, my advisor stood, drinking a beer. An hour earlier, he had arrived home from the airport. He had been staying in Berlin for the past week with his new love, a German physicist named Johannes whom he’d met in Amsterdam while I looked after his dogs.

I hadn’t planned to tell him about my decision, not yet, but we’d been talking about love, new love, and, though it was a radical thing to say and an even more radical thing to do, the truth had emerged from my mouth: I was done. I was quitting the program. Now, we were looking at each other, surprised.

Before I could answer, he said, “You won’t have to move somewhere you’ll hate, somewhere without men. Not if you don’t want to be an academic, and you don’t need to be.”

“You’re two years away. Maybe one.”

A jet flew by, marking the sky with the faint white lines my neighbor Miles called weeping chemical trails. He had studied classics at Harvard in the seventies. Now he was in his sixties. He was tall and rangy, athletic. Though he was HIV-positive, he’d been able to manage the illness. His gentleness and intelligence were evident when he spoke, though he also had some strange ideas. He lived behind my house in a little studio, taking care of small repairs for the woman who owned the buildings. In his spare time he kept up his Latin and Greek.

I was writing back then, had just started, and I was trying to write myself out of a rage I didn’t want or understand.

He looked relieved, but that wasn’t what I meant.

The day before I’d begun to write, I went by Sylvie’s place. “It is too hot to live,” Sylvie said in greeting, her hair wet from a cool afternoon shower. I envied her nonchalance and her legs, which were long and golden brown and tapered to elegant ankles with little divots on either side of the long bone. The heat was making everyone insane, people were not supposed to live in the desert, Sylvie continued, she was leaving the desert, she was moving to San Diego, that was it, she was moving to the beach, it was final. But then she emerged from the bathroom wearing a faded green bikini and we set up lawn chairs in her sandy yard and drank cheap white wine with ice cubes and invited the sun to bake our brains into a fine casserole.

We were neighbors, more or less. She lived four blocks away in a casita behind a large wooden fence with a metal gate she would prop open for me on Sunday nights when I came over to join her to watch bad programming on her small TV set. People in our neighborhood liked fences, or, to say it another way, they didn’t like meth addicts breaking in. Three times that year Sylvie’s car windows had been smashed, and it was only April.

Now it was the shoulder season of the day: late afternoon, a pause. We sat in the sun. Sylvie yawned; I scratched my leg. What I wanted most was for us to go on this way: all potential, no action. I liked this state. Longing was, I felt, preferable to disappointment.

“What if your soulmate and your best friend and the love of your life turn out to be three different people?” she asked me.

“It’s a stupid question,” she said, “but this guy asked me, and now I can’t stop thinking about it.”

“What if one turns out to be a really bad person,” she said, “like a murderer, or one of those people who insists on correcting other people’s pronunciation?”

Nothing was turning out as we had imagined, we agreed, and maybe it was the strength of the desert sun, but we felt like we were squinting toward a future that glowed white without possessing any discernible shape. Waking and looking out the window, I sometimes could not recall if it was January or July. This dislocation felt pleasantly cottonlike, like waking from anesthesia and drifting back to a sweet, drugged sleep.

When my intentions became clear, my advisor said: “I should have known.”

“You didn’t come to Boston.”

“It wasn’t because I was thinking about quitting,” I said, but then I thought about it more and maybe it was. It was that year, in his absence, that I had seen how work might become a sort of obliteration, how I might dedicate myself to answering questions that grew smaller and smaller until I myself could not remember why I was asking them, could not, some days, engage with them as anything other than ritual, and while I saw the point, of course I saw the point, I could not help but think of a story I had read in college in which it was said of a person,  “What stood out about him was that his life got put past him.” And then I went to Sylvie’s, and then I began; and now, eleven months later, here we were on his roof deck, saying goodbye.

What made me decide? To be honest, I don’t know. It was like waking up from that sweet, drugged sleep and feeling panic that it had all been real after all. No one had told me. I had just been supposed to know. It didn’t go well at first, and that was a relief. I’m not going to do this, I thought. But then I didn’t stop. It was a bit like falling in love. Much harder, but as helpless-making.

Your face: the thing I loved best. The thing I watched doors for.

One of the most shocking things, I would come to find, was how easily my life dropped away.

At home, I went to bed alone. According to his new love, my advisor had told me that afternoon, Germans don’t interrupt each other the way Americans do. In German, the verb comes at the end, so Germans have to hear each other out to discover what the action will be. “Do you believe him?” I asked. “Not really,” he said. “But I don’t interrupt him anymore either.”

When I had broken up with Javier, my advisor had told me, “Don’t worry. Life keeps giving you chances.” “Chances to what?” I’d asked. “Chances to love things,” he’d said. “Chances to become someone new.” I knew that didn’t happen, of course; only romantics thought so.

Excerpted from You Never Get It Back, available online and in bookstores beginning December 15 from University of Iowa Press.

“It Can Be a Wild Story, but Everything Has to Feel Real.” A Conversation With Graphic Novelist Rutu Modan 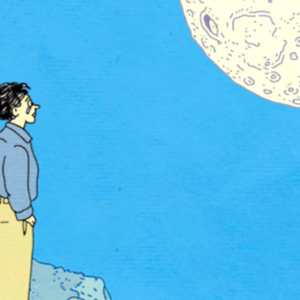 “It Can Be a Wild Story, but Everything Has to Feel Real.” A Conversation With Graphic Novelist Rutu Modan Rutu Modan (Tunnels, Exit Wounds, The Property) and Jason Lutes (Berlin) spoke to one another as part of D+Q Live, a fall...
© LitHub
Back to top