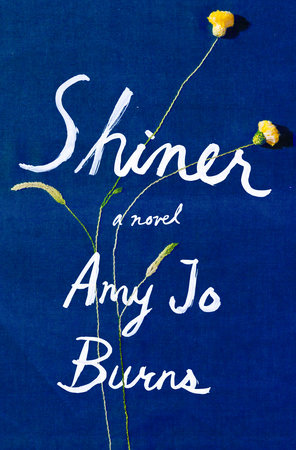 It started with a burn, just like the stories of Moses my father used to tell. Moses, he said, was nothing more than a shepherd hiding in the hills until he scaled a mountain and found a flaming bush. Then he was never the same. My father had a tale just as magical, a story of his own origins as a man of God. He loved to tell it as much as my mother wished she hadn’t ever believed it.

For as long as she was alive, she never told me her own story. I used to hear her whisper to her best friend, Ivy, that she wished she’d been known as anything other than Briar Bird’s wife. I hated this about our life in the hills—mountain men steered their own stories, and women were their oars. I asked once if my mother had seen what lay beyond the bluffs, and she led me to the peak of our fields that overlooked the ravine behind my father’s snake shed. In the distance I could see two razorback stone ridges rise from the trees. All my life these mountains had watched over me. My mother knelt beside me, put her arm around my waist.

“There are two ways to see a mountain,” she said as she shielded her hazel eyes from the sun. “The view from the top and the view of the top.”

Ivy came behind her, three of her boys at her back. “From the top of our mountain, the hills of West Virginia bow at your feet,” she said. “But from the bottom, you bow at theirs.”

It started with a burn, just like the stories of Moses my father used to tell.

My mother caught a wisp of her dark hair as it danced in the wind. Her braid fell past the waistband of her skirt, where she tucked the pearl‑handled switchblade that Ivy had given her long before I was born. Ivy pressed a hand to my mother’s shoulder. Their accord was unspoken, haunted by promises they’d sworn to keep.

Everything changed when Ivy caught fire. That morning, not long after my fifteenth birthday, I had spied my first summer fox from my bedroom window. The fox pranced in the morning sun as I waited for Ivy’s scowl to appear on the horizon, her blond hair trembling against her shoulder. Ivy was the only woman who knew how to reach my father’s hideaway beyond the pines. We lived on the mountain’s western ridge, just below the razorbacks and the highest knolls for miles, a stretch of meadow called Violet’s Run. Ivy hiked the snarled hill to our cabin every day, because she and my mother could not survive without each other.

It had been that way since they were girls. Theirs was the same life lived twice over, though Ivy had four boys and a husband, Ricky—who was whiskey‑sick and dope‑drunk, my father liked to say. Ivy and my mother had grown up together, gone to school together, fallen in love together. This bond was the only thing my mother had that I envied. I wanted an Ivy of my own. My father envied it, too.

“Bread and Ivy,” he said with his preacher’s smile. “That’s all your mama needs to survive.”

My father buried himself in the things he loved—his snakes, his woods, his wife. Every time Ivy visited with her boys, he retreated to his snake shed by the cliff. He couldn’t bear to share my mother with anyone—not with Ivy, not even with me.

Ivy came early enough the morning of the burning that she had to walk by faith to find the cabin through the fog. We lived at the top of a slick dirt path, and our gray roof faded into the dying trees above it. No outsider had ever found our road, hidden behind a swamp and a stand of balsams. My father liked it that way—being half there, half not. The cabin tilted on its beams, ready to be raptured. Even without a breeze, the house’s bones moaned.

It was June, and I waited for Ivy at the window as I always did. When she and her three youngest boys crested the hill, I ran outside to greet them. Yesterday they hadn’t come. My mother and I waited all morning before we ate the corn bread and molasses we’d prepared and folded up the picnic quilts we’d laid for the six of us to sit on in the tall grass. I wanted to know why they’d left us alone, but Ivy looked in no mood to be asked. Her skin glistened with sweat, and she made no sound as she headed toward the back of the house, where my mother stirred a drum of soap.

My mother liked to keep her hands busy. She made soap, made dresses, made waves in the creek water. Those hands calmed only at dawn, when she’d stand in our field and stare at the horizon as if she expected Jesus himself to cross it. My mother was restless, and Ivy was the only person who could still her.

At the front of the cabin, Ivy’s boys stared at me.

“Where did you go yesterday?” I asked. “We waited till noon.” Henry, Ivy’s second‑oldest, shrugged.

“Nowhere,” he answered as he looked past the house toward the lean‑to my father had built at the edge of the ravine. “Can we go in the snake shed today?”

“Liar.” Henry touched the rattail at the back of his neck. “You’re scared of gettin’ bit.”

“Henry.” I straightened his collar as Pony, Ivy’s youngest, toyed with the end of my braid. “If you’re so brave, go knock on that snake shed and look my father in the eye.”

My mother liked to keep her hands busy. She made soap, made dresses, made waves in the creek water.

Folks hated looking at my father. A bad storm during his boyhood had blighted one of his blue irises. He’d gone legally blind in his left eye, but folks still believed he could see. He didn’t care what other people thought. He kept his serpents in boxes. They stank and needed to eat the living in order to survive. We had five of them.

“People at school down the mountain say you’re strange,” Job said. “That your daddy keeps you locked up with the snakes.”

On the first Monday of the month, my mother and I went to town for groceries with the tithe money my father earned from preaching. Our shopping list never changed—flour and cornmeal for bread, beans, milk, and canned oranges and peaches. Chicken legs and sugar when we could afford it.

Every trip into Trap was a catapult through time. My father obeyed the rituals of snake‑handling law, which meant he pretended we still lived in the 1940s instead of the age of the internet and all the things people did on their cell phones that I couldn’t understand. Back then, George Went Hensley had convinced mountain folk that taking up serpents was the one true way to worship God. Daily, my father lifted his serpents to the sky and uttered a prayer in tongues that no one could interpret. His face looked euphoric and eerie as he babbled. He did it at Sunday gatherings with twenty people watching, and he did it alone in his shed, where I spied him from the scant window. He didn’t need an audience with money to worship his God, but we did need that money to live. More than a half century had passed since snake‑handling fever had swept through our hills, and now fewer than a hundred snake handlers remained across the country. No one believed in the power of taking up serpents anymore. Bitterly, my father claimed they believed in the power of prescription pills instead. The offering he collected on Sundays amounted to a fistful of quarters and a bare spread of dollar bills. It was never enough.

Once a month Ivy drove us to Trap in her old Pontiac. I sat in the back with Pony on my lap for forty minutes of twists and turns.

The stares began as soon as we spilled out of the car into the Shop ’n Save parking lot. Mothers, children, loggers, cashiers. They squinted at the pleats in the skirts my mother had hand‑sewn for me from her old dresses. Their eyes tripped over the length of the French braid running down my back.

“It’s sad, keeping her locked away on that mountain,” I once heard a woman whisper to her grown son as he stifled a laugh and took a picture of me with his phone. I didn’t even know that a cell phone could take a photograph until I flinched at the flash.

Now, in front of our cabin, we heard Ivy scream. Pony let the tail of my braid slip through his fingers, and I sprinted toward the sound. Until then the groans I knew were spirit‑filled and Sunday‑strong as men and women called out to God. But this was the sound of real affliction. It was pure, and there was no God in it.

When I rounded the house, I saw my mother’s best friend kneeling at the fire. Smoke twirled above her as the flames caught her dress and hair. My mother’s soap pot had spilled hot lye and grease down the front of her. Ivy swayed in the still air. Her braid transformed from blond to flaring orange to black.

“Briar!” my mother called out for my father.

I ran to the spigot. I filled a pail of water and doused Ivy’s back. Her whole body hissed. Her scream limped to a sob as the flame surged. My mother tore her skirt and pressed it against Ivy’s front. Her face contorted, but she made no sound. Ivy fell backward, and my mother looked up. Her brown hair fell from her bun as Ivy writhed beneath her.

My mother’s head snapped toward me. “Wren!” she yelled. “The boys!”

It was too late to shield their eyes. Pony hung on my skirt, and I felt Job’s hand on my back. His chest whistled as he tried to catch his breath.

“Run as fast as you can to the snake shed,” I told Henry. “Knock, but don’t open the door. Tell my daddy to come quick.”

He stood, petrified. He was just as afraid of the shed as anyone else was.

“Take your brothers inside the house and wait for me.” I touched his arm. “Stay away from the window.”

I took off for the shed, about fifty paces from the cabin. On its far side, a patch of rocks guarded the ground before it pitched off the cliff. The shed presided like a dark lighthouse over the rippled hills beneath it.

When I reached the lean‑to, I kicked the door with my foot. “Daddy!”

I hefted the latch and flung open the door before stooping to get inside. My father was fast asleep against the far wall, his legs sticking straight out in front of him. A patch of golden hair had fallen in his eyes, and it sparkled in a shaft of sunlight.

I crouched and clapped my hands in front of his face. Startled, he came to. His bad eye was a disk of white in the dark.

Excerpted from Shiner by Amy Jo Burns. Reprinted with permission of the publisher, Riverhead Books.

Alex Lazarow: Will Silicon Valley Still Be the Heart of Innovation After the Pandemic? 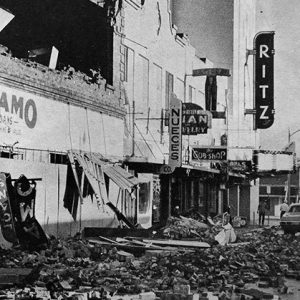 Alex Lazarow: Will Silicon Valley Still Be the Heart of Innovation After the Pandemic? The coronavirus pandemic is dramatically disrupting not only our daily lives but society itself. This show features conversations...
© LitHub
Back to top