The Author of St. Ivo Talks to Maris Kreizman

On this episode of Sheltering, Maris Kreizman speaks with Joanna Hershon about her new novel, St. Ivo, the story of an idyllic-seeming couple reconnecting with old friends for a weekend, and the darkness beneath the facades of each relationship. Hershon discusses the intense domesticity of quarantine, being jealous of her characters for being able to go out to dinner, and the new ways we must find to punctuate our days with small joys and pleasures. Hershon’s local bookstore is Books Are Magic; please purchase St. Ivo through their online store or through Bookshop.

Joanna Hershon: Thank you so much. It’s so great to be here. I’m a fan.

Joanna: I mean, I’m incredibly fortunate and healthy. My family’s healthy. We’re in a wonderful place; we have food. So, I would say great, on the scale of the world. I anticipated a spring of travel and meeting people and connecting, and I actually really enjoy people, so I was looking forward to that part of launching a book. That’s not every writer. A lot of writers don’t love that part of launching a book, but I do. So, I was looking forward to that. But now, you know, it’s changed. In the beginning, it’s a lot to let go of, and you’re trying to hold on to what you’re missing, but now I’m past that. Here we are.

Maris: It’s so tough. On the other side, there are so many events that I wanted to go to and so many people I wanted to see. And so lucky to be able to do this digitally at least. Tell me about your wonderful novel—is it St. E-vo or I-vo? [holds up copy of

Joanna: I’m going with Ivo. I feel like both are correct. I flip back and forth, but let’s just say St. Ivo. I meant to have an actual copy with me, but I don’t have it at the moment. That’s the galley; very exciting. St. Ivo is about a couple, Sarah and Matthew. They seem to be living a somewhat idyllic life in Brooklyn, and we realize pretty quickly that things are not so idyllic. They have recently gotten back together after being separated, and there’s quite a dark situation going on with their daughter, and it’s mysterious. I’m not going to say too much because I don’t want to give it away. They also have been invited to spend time with friends with whom they’ve been estranged. They hadn’t seen them in many years, but they were very close. And this couple gets in touch out of the blue. They had never wanted to have children; they are in their mid-forties and they suddenly have a baby. Sarah and Matthew then leave the city, go to the country for a long weekend. And during these three hot days at the end of the summer, these people are pushed to their breaking points, basically.

Maris: It reads a little differently, reading in quarantine, about people living in the same house, just about hitting their breaking points.

Joanna: I have really found it to be bizarrely emotionally relevant right now. Resonant. Because it’s also really a novel about living with uncertainty on a broad, thematic scale. Living with uncertainty, and how do you live when your life does not look like what you thought it would look like? I’m finding all of these themes in it that are hitting me in a different way. All the people in one house, it’s a bit claustrophobic.

Maris: The atmosphere’s claustrophobic, but at least they get to go outside, go swimming. Have outings.

Joanna: It’s so funny, I was writing something about a book, and I was saying these people are doing crazy things, like going to have dinner! At a restaurant! Everything takes on a new significance and wonder.

Maris: It does. Tell me a little bit about the structure of the novel. It takes course over three days, but you’re so good at revealing just the right amount of information at the right time.

Joanna: Thank you. That was a huge part of writing this book and working on it. I think that came in an organic way, intuitively, because I really hate when you read books that are internal, you’re in someone’s head, but you’re being shut out of very important information. That’s something that could have been the case—I don’t feel like it comes across as coy or avoiding, it’s the way we actually think. Or I think. You’re only taking on what you can handle in your mind, and then something will intrude. The structure, it’s very much city, country, city. There are several reasons for that. I love a weekend in the country. I love that trope, that structure, where it’s not your real life, you’re on vacation or you’re in a slightly different reality than the one we’ve met you in, that you’re grounded in. I’ve always been drawn to that. Also, just this idea of meeting up with people that you once knew in a different environment holds a lot of dramatic promise for me.

Maris: A thing that really struck me was that even in these mundane circumstances, there’s always a threat of violence looming. Sometimes more.

Joanna: There’s violence in the book, for sure. Not at all gore, it’s not violent, but there is this threat. I think that’s because it mirrors her—there’s different kinds of threats of violence in the book, but there’s also her own internal rage. How to deal with one’s own rage, and how to deal with one’s own sense of being out of control and trying to keep things in control. There are the internal forces and then there are external forces, and both are at play in the book.

Maris: Tell me a little bit about where you are now and how your family is, all of that stuff.

Joanna: It’s funny. I love watching your videos and other people’s interviews during this time. I have three children, I have two teenagers and I have a five-year-old, so I am extremely—I’m not doing very much in terms of reading War and Peace. I’m doing a lot of dishes. I’m making a lot of food. That’s basically what I’m doing. We were in the city for quite a while, and then my in-laws were stuck somewhere, so we are actually in their house now. We left the city and we’re in their house, which is about two hours outside of the city. So that’s been really great, I’ve got to say, to have a little bit of outdoor time. I’m really in a very domestic realm, I would say.

Maris: I think we all are. I’m not reading War and Peace either, but just realizing how many meals we eat, and how many dishes are involved.

Joanna: I’m always struck by—it’s obviously such a challenging time for our country, for our world, and I am struck every time I go to the market, I’m just amazed by how much bounty there is. There’s a lot of food that we have access to at a regular supermarket. It seems out of step with how extreme the situation is.

Maris: In Brooklyn the toilet paper situation, is, uh…

Maris: I may have learned to make a dirty vodka martini in these weeks because olives are available.

Joanna: It’s funny also, the way your day is punctuated. Before this, as a writer, you have your time and you punctuate your day. I know for some people it’s very hard to quit cigarettes because of that. I was not a smoker, but really good friends of mine who are writers, they punctuated their day by a cigarette, or you get your cup of coffee or you meet a friend. These little punctuations are gone. So, you find new punctuations. You find your little pleasures too.

Maris: My punctuation is that I change from my day pajamas into my evening pajamas.

Joanna: Totally. Yes, my pajamas into my day pajamas.

Maris: What is your local indie? Or is there one where you are now?

Joanna: There’s none that I know of where I am now, but I’m ordering lots of books from my local indies in Brooklyn. The two ones that I think of initially as my locals are Books Are Magic, where I have a book launch tonight with Susan Choi—she’s brilliant, and she’s such an incredible writer and generous person. So, Books Are Magic and Community Bookstore in Park Slope. Then also Greenlight. Those are my three go-tos. There are so many good ones. So many good ones that need our support, need us to buy books.

Maris: We should all buy books. What have you been buying?

Joanna: Well, Bookshop.org is amazing because they can ship, and you can order from your local bookstore, so I’ve been doing a lot of that. What I’ve been buying… I bought Anna Solomon’s Book of V, which is coming out soon. Phyllis Grant’s memoir Everything Is Under Control—wonderful. I bought a bunch of those and gave them to friends. Cathy Park Hong, Minor Feelings, a wonderful book of essays about Asian American reckoning, which has taken on unfortunate new relevance. I will think of Cathy Park Hong’s launch at Books Are Magic as the last hurrah. That was a very packed, incredible room. It was the most crowded book launch I’ve ever been to, and it felt really urgent then, all that she was writing about, and then all of a sudden it became even more relevant in terms of racism toward Asian Americans. These stories just don’t stop. People taking out their anger and fear, it’s just horrible. Everyone should read her book.

Maris: Yes, everyone should read that book. Well, thank you so much. This was such a pleasure.

Joanna: Thank you so much, and thank you for all you do for writers.

Maris: It’s a one or two sittings kind of book.

Joanna: Yeah, a one- or two-sitting book.

Adam Driver is set to star in (yet another) adaptation of a David Grann article. 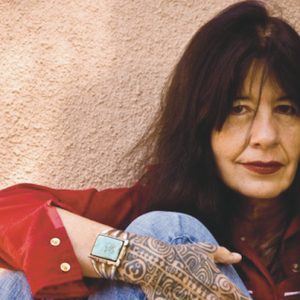 Today, the Library of Congress announced that Librarian Carla Hayden has appointed beloved poet Joy Harjo to serve a second...
© LitHub
Back to top