The Author of The Ancestor Talks to Maris Kreizman

On this episode of Sheltering, Danielle Trussoni speaks with Maris Kreizman about her new gothic novel, The Ancestor, which revolves around a woman finding out she is a member of an aristocratic family in Italy, and who ends up getting trapped in the family’s estate. From there she enters a world of dark family secrets, gets caught up in the mysteries of human genetics, and carries the burden of family inheritance. Trussoni and Kreizman discuss the long history of humanity, this moment in time being an impetus for change, and big, cozy sweaters. Please purchase The Ancestor online from your local bookstore or through Bookshop.

Danielle Trussoni: Hi, Maris. Thanks for having me.

Maris: As I mentioned before, I love your sweater.

Danielle: Thank you! I’ll have to post a picture of it when this comes out so people can see it. It’s a big, white, kind of croppy thing I made. It’s my anxiety activity while we’re sheltering in place, is to obsessively knit.

Maris: That seems healthy, especially when you’re making good things. So, introduce yourself and tell us a little bit about how you’re doing, what else you’re doing besides knitting.

Danielle: Sure! I’m Danielle Trussoni. I’m a novelist and memoirist. I’m in New York; I’m about an hour and fifteen minutes out of the city right now. I’ve just been in my house, like everybody else—in their apartment, in their house—trying to get through the pandemic without losing my mind. One would think that for a writer who’s used to solitude, this would be no big deal, but there are the things that keep writers sane. After a day in your office, or as I call it, my writing cave, because it feels very much like a cave lately, going out and having a glass of wine or meeting friends or going to the bookstore, any of these things were the things that marked my ability to stay on track and feel good about the world. Obviously, it could be so much worse, and there’s so many other things that could be happening, but it’s just a moment that we’re all going to have to get through.

Maris: Tell us a little bit about your latest book, The Ancestor.

Danielle: My new book is called The Ancestor. It’s my third novel; my first novel was Angelology and then there was a follow-up to that, and then I wrote a couple literary memoirs too. The Ancestor is about a woman named Bert—her full name is Alberta—and she takes a DNA test, just one of those standard 23andMe tests that so many people take, and it leads to her discovery that she is a member of a very strange aristocratic family in the Alps of Italy. She’s of course very skeptical, and she’s not someone who just buys into this idea like it’s a fantasy or something, but she ends up going, and as this is a gothic novel, she becomes trapped in this estate she’s inherited. All sorts of things unfold about her family, her inheritance, her genetics, her past, and ultimately her future and her family. All of those elements are wrapped up into this novel.

Maris: I hesitate to say now more than ever, but certainly reading about a woman trapped—

Danielle: It does feel almost too timely.

Maris: At least she does have access to the wine cellar.

Danielle: Of course. What else do you need, right? When I was imagining this story, I was like, if I were trapped in a big old scary estate in the Alps, what would I need? Oh, vintage wine, okay.

Maris: I identified with Bert mostly in the way that—her case is way more extreme than mine and yours and anybody’s, but the rhythms of her old life just start drifting away as she becomes more embroiled with her family.

Danielle: Yeah, everything unravels. And it’s not just the rhythms of her day, though that changes too—she’s sleeping during the day and she’s up at night and she’s wandering through this castle, and there are people in the castle who are very strange, and she sort of gets embroiled in their lives—but also in the rhythms of who she thinks she is as a person. She had this vision of who she was as a woman, and certain things fed into that, namely who her family was, and she separated from her husband when the book begins, though they’re on very good terms. All of that sort of explodes in a very big way. The question that I was interested in asking in this book was who are we when our ancestry is stripped away? And who are we when we find that all of these cultural identifications that we’ve used to create our personality, our rituals, our family connections, is suddenly invalidated in some way. It really was an interesting idea for me to explore.

Maris: There’s a note at the end, but I wanted to ask you about it. So much of what you talk about in the book is about genetics and Homo sapiens.

Danielle: Yes, I became fascinated with not just the history of our ancestry. If you think about it, when we talk about, oh, I’m Italian American, or I’m Jewish, or my ancestors came from Norway, or something like that, we’re talking about just the last thousand years usually. What I became fascinated in was the idea of the long history of humanity. Who we were 50,000 years ago, for example, when there were multiple hominid human being tribes living together on this planet, and what would happen—to pose just a speculative question here—if some of those tribes survived? And we were not making comparisons as human beings between races and cultures and identity in that way but between different species of humans? I thought that was extremely interesting, just to widen the perspective of what is identity.

Maris: It certainly opens up the entire universe. I feel like right now, when we’re all trapped in our homes, to really think about where we are in the scale of humanity.

Danielle: Right. If you look at it from that angle, it seems a little bit small sometimes, the things that we’re fighting about or that divide us as people. The old cliché that you need an outsider to form a unit—humanity is a unit. We’re a unit. The idea is very much at the core of this book, about what it means to reform those ideas.

Maris: I love that. Maybe a sore topic, but tell me what you were planning to do for your book tour, and tell me how you’ve revised.

Danielle: I know, my heart just broke a little bit when you said that. I had a pretty full schedule. I was meant to open it up at Literary Orange in California, and I had some events around that in California, and then I was going to D.C. to One More Page Books, where I was going to do an event with the Book Maven, Bethanne, and another writer who wrote a book called The Deep, Alma Katsu. I had a big book launch planned in New York, and then I was going to the Midwest; I had things in Chicago and Milwaukee and Minneapolis. So, it was a big affair. Basically, when all of that dissolved, I shifted, and I’m doing events online. I’ve been doing a lot of Zoom readings. I did a really fun event the other day with Janelle Brown, who has a new book coming gout next week. I really just pivoted—it’s what everybody in my publishing house is calling it—and I’m going online.

Maris: Do you have a local indie bookstore that you would like to shout out?

Danielle: I do! Oblong Books, which is in Rhinebeck, is amazing. I’ve been working with them—I’m driving up and signing books, and then they’re mailing them out. So, if anyone would like a signed book and would like to support Oblong Books in the process, that is a great way to do it. It’s very funny, because I knock on the door and whoever’s inside steps away, and there’s a table in the center and I’m like frantically sanitizing and signing, and then I leave and they come and lock the door. It feels like something out of my novel almost.

Maris: It sure does. It’s so lovely that they’re able to do that.

Danielle: I’m so pleased that they are, and they’re just wonderful people in general.

Maris: Tell me a little bit more about what else you’ve bene up to. Have you been reading or watching TV?

Danielle: I’ve been trying. I have a 2-year-old—

Maris: That’ll take up your time.

Danielle: In between running after her and working, I’m pretty exhausted by the end of the day. I’m excited, though. I’m working on a number of things. There’s a new book I’m working on. I have a television idea, something in the works in Los Angeles that I’m excited about. I’m trying to stay very level through this. I’m trying to think of this as a moment when in ten years we’ll all look back and see how we withstood this. Personally, I think this is a huge moment of change. it seems awful—it

is awful, and we’re all suffering, some people more than others. But I think this is going to be an impetus to change a lot of things in this country.

Maris: I hope so.

Danielle: It’s an opportunity for us to take back things that have been kept from people, like healthcare and all sorts of public programs that have been essentially robbed and shut down over the past thirty years. I’m trying to be optimistic in that way.

Maris: I’m going to take that with me because that sounds really great.

Danielle: Yeah, you can get through the day on that, right?

Behind the Mic: On Save Yourself by Cameron Esposito, Read by the Author 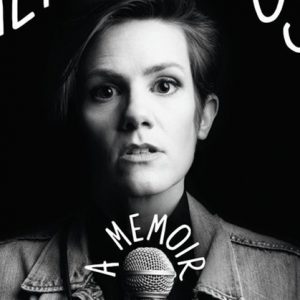 Behind the Mic: On Save Yourself by Cameron Esposito, Read by the Author