Shelf Talkers: What the Booksellers Are Reading at Boswell Book Company

Favorites From One of Milwaukees Great Bookstores

Shelf Talkers is a series at Lit Hub where booksellers from independent bookstores around the country share their favorite reads of the moment. Here are recommendations from the staff at Boswell Book Company, a store in Milwaukee, Wisconsin, that was established in 2009. 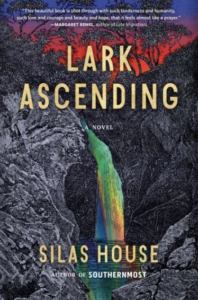 In the not-too-distant future, fires have ravaged much of the world, and America has been taken over by extremists. Even the isolated Maine woods have become too dangerous. The only option is for Lark and his family to escape to Ireland, the only country still open to refugees. But during the harrowing voyage, not only does tragedy strike at every turn, but hopes for a peaceful resettlement are dashed. Can Lark, with the help of two newfound companions (one canine) find peace in the legendary settlement of Glendalough? I’m not generally a dystopian reader, but Lark Ascending’s beautiful language and imagery, combined with the emotional heft of the story, drew me in from the first paragraph.  –Daniel Goldin, proprietor 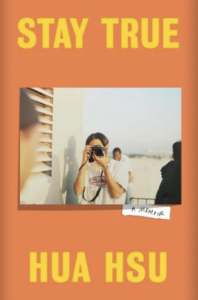 This memoir is: an outsider’s time capsule of the 90s West Coast, a dissection of friendship via philosophy and language theory, and a lived account of Asian diaspora in America. It’s the tone of nostalgia from a Smashing Pumpkins song. This book tore me completely apart. For anyone who’s ever found a friend who let them find themselves, for anyone who’s ever lost a friend who took a chunk of you with them, this book is going to destroy you then put you back together again, a little wiser and a little more tender.  –Chris Lee 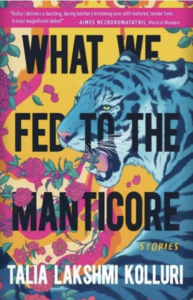 Talia Lakshmi Kolluri, What We Fed to the Manticore
(Tin House Books)

Each story in this collection is a unique gem. Told from animals’ points-of-view, the narrators include a donkey, tiger, vulture, and fox, a rhino keeper’s dog, a sled dog, whale, wolf, and a pigeon. Joy, fear, curiosity, confusion, willfulness, and denial are among the feelings and thoughts revealed by the narrators. Read the stories one at a time. You might find yourself inside another creature’s mind… all on your own.  –Kay Wosewick 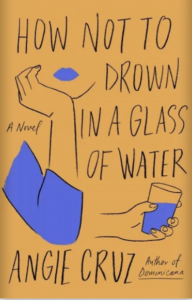 Angie Cruz, How Not to Drown in a Glass of Water
(Flatiron Books)

Cara Romero wants to work. After being laid off at the factory, Cara meets with a job counselor to help her find a new job. Told through 12 counseling sessions, Cara shares her life’s story: from the Dominican Republic to Washington Heights, through marriage and motherhood, family, friends, lovers, and faith. Insightful, heartwarming, and laugh-out-loud funny, How Not to Drown in a Glass of Water is a new favorite! Grab your favorite cafe and settle in, Cara Romero is a character you will not forget.  –Jen Steele 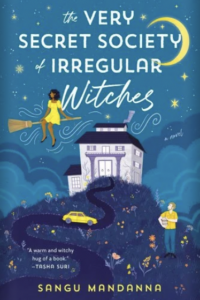 When lonely Mika Moon is invited to mysterious Nowhere House to teach three young witches to control their magic, she should refuse, but she doesn’t. Now all Mika has to do is keep the girls’ feet on the ground (literally!) and her heart guarded from something she shouldn’t want—to love and be loved. Finally, a witch book that nails it! The magic in this book is that perfect balance of wicca-ish and Sabrina the Teenage Witch silliness, but the real winner is the element of found family. Mandanna’s writing is relentlessly charming – mark me down as devotee!  –Rachel Copeland 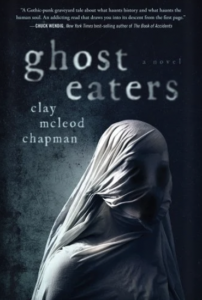 Erin’s on-again-off-again boyfriend finds a drug that allows him to see the dead. When he suddenly dies one day, Erin and her friends attempt to contact him. Chapman amps up the anxiety and suspense in this drug-fueled horror novel about love and loss. Both Erin’s friends and the Richmond scenery that they inhabit have storied pasts with sins in abundance. When the end came, it leveled me—such a great book!  –Jason Kennedy 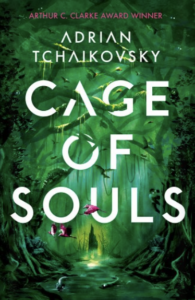 Set against an inescapable prison in an earthly yet alien jungle, this is the firsthand account of the end of the world as told by historian-turned-political-prisoner Stefan Advani. As the world around him rapidly adapts to the changes wrought by previous generations of humanity, the human world stagnates as it refuses to save itself. Despite the stark setting, this is a book about determination and hope and the will to survive and thrive with those we hold most dear. The last moments left me with a deep sensation of hope and awe that I will not soon forget.  –Sarah Clancy 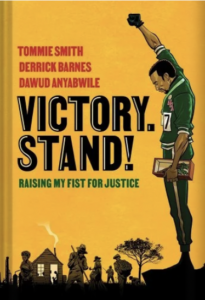 I was eight years old in 1968 as I watched Tommie Smith and John Carlos receive their Summer Olympic medals with raised, black-gloved fists. I admit that the moment scared and confused me. This suburban white kid didn’t understand how a great victory would make these men look so sad. Now I’ve been given a chance to learn Tommie Smith’s life story directly from him. He was also young when he started wondering what was wrong, why his large, loving, hard-working, faithful family of Texas sharecroppers had so much less than whites, despite tireless, honest effort. The story of his path from childhood to the moment they took a stand for human rights and a better nation is inspiration from an American hero, for which I’m deeply grateful. With exquisite illustrations by Dawud Anyabwile, this graphic novel answers questions that began in my eight-year-old thoughts fifty-four years ago. Now that’s extraordinary!  –Tim McCarthy

Powerful and Multifaceted: Maya Phillips on the Responsibility of Black Superheroes 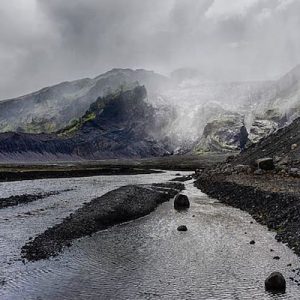