At 17, Alone in the Wilds of the City

I didn’t know a single grown-up woman. I was 17, living in a house on industrial, bleak, Bathurst Street in Toronto. It was the mid-90s. My boyfriend lived in one room and a girl lived in the other room and there were always high school kids dropping by, because no one’s parents were around. I would wake up early while everyone was still asleep and take the subway to Random House, down near the bottom of the city. I was too young to need breakfast. I roamed the office in my coat because I didn’t have appropriate clothes and I was always cold. The only reason I had a job was because of a woman named Susan Roxborough.

Susan was Naomi Wolf ’s publicist in Canada. Naomi Wolf had published The Beauty Myth a few years before and was the feminist from whom I first learned about feminism, so when I heard that she was lecturing in Toronto, I bought tickets and went to hear her speak, then stood up during the Q&A and explained that she had changed my life. I went down to the podium and gave her the zines she’d inspired—or rather, I gave them to an attractive brunette nearby—feminist zines I had put up on the walls of my high school the year before. Only later did I come to understand that I had given the zines to her publicist, after she wrote me a letter saying she liked them. Did I want to meet with her—Susan Roxborough—about the possibility of creating a book of writing by teenage girls for Random House? Naomi would write the introduction. It took me three months to receive her letter (by which time there were three letters), which had been sent to the P.O. box mentioned in the zine—three letters, each more urgent and bewildered than the last, because I never checked the P.O. box, because the only letters that had been sent there were hers.

During my first meeting with Sue, she realized I needed a job and arranged for me to be hired as publicity assistant. At the time, the Ontario government paid for young people to work in mentorship environments. I was now the only person in the house on Bathurst not on “student welfare.” I would photocopy press clippings that came in huge envelopes, which had been scissored out neatly by clipping services, with the name of the author underlined with a ruler and a pen, topped with a white tag bearing the clipping agency’s name and date. I’d put the clippings in the author’s file in the long gray row of metal filing cabinets in the hall. Then, when authors had new books coming out, I would go into their files and photocopy the best clippings, and those pages would be sent out with the books. I didn’t have a desk; I just roamed the halls and waited for a publicist to call me in with a task. That’s what I did, apart from stealing books from the book room—contemporary hardcovers by the Dalai Lama or cookbooks by Bonnie Stern or the latest novel by Carol Shields—to sell at used bookstores so I could buy myself lunch, or buy other used books for myself that I wanted even more than lunch.

I had one other friend at the offices; she was about 24 and seemed more sophisticated than I’d ever be (which turned out to be true), a woman with the exotic name of Jasmine Zohar, whom I once invited to our house on Bathurst for a dinner party. Her whole being radiated disdain and distress, which made our foolish company stand out in unflattering relief (we served her “peanut butter soup”) and I knew I would never invite her again, and that I should not ever invite Susan. Perhaps I would have known this anyway: Susan was too special, too much mine, and too oddly hovering between parent and guardian angel for me to imagine her ever inside my dreary life with my friends.

Susan was in her early thirties at the time—brilliant, soft-spoken, tough, loving, and unsentimental. I couldn’t imagine she had real fears or insecurities, but in retrospect, she seems like any woman whose life is not quite settled, for whom the dramas of men are something significantly more painful than whatever glamour a teenage girl might attach to them—genuinely painful, not exotic. I would hear the publicists talking about their love lives. They always seemed grave.

I sometimes went to Sue for advice, but more important was the fact that I was around her every day. If I saw her in the halls, or through her office window, it meant nothing could collapse too completely. My parents were divorcing, my boyfriend was sleeping with other girls—only Susan radiated safety. If I picture that time without Susan Roxborough, I feel scared. I would have been living out in the cold, out in the wilds, without a responsible eye. But everything would be basically ok because there was Susan. She had given me a job. She was working with me on my first book. She convinced me to go to university. She closed the door whenever I came to talk to her in her office, and listened to me with her wide blue eyes. I knew she didn’t gossip about me with the other lady publicists, whom I liked but did not love. I could always close the door on the wilds of that first year of living away from home, and sit in a chair by Sue.

A person needs only one figure of understanding in order to not feel they are a random, spinning particle in the universe, without destiny or care. In those years, which my grandmother once called my “lost years,” that person was Susan Roxborough.

Just last month, recently divorced, she visited Toronto with her 11-year-old daughter, and came and sat in my apartment, where we talked about our lives. We gossiped about the people we still knew in common—and Sue was gracious, careful not to say anything mean. And about a matter that had been bugging me for years, she was the only person able to respond in a way that calmed me.

Susan now lives in Seattle, and she spoke of a desire to move back to Toronto, “home.” I hadn’t realized she felt her home was here, and I felt too shy to tell her that, when I was a teen, “home” was a hallway near her. 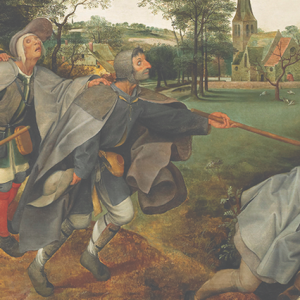 The images below are drawn from Looking At Pictures, a collection of Robert Walser's joyful musings on art, which make...
© LitHub
Back to top