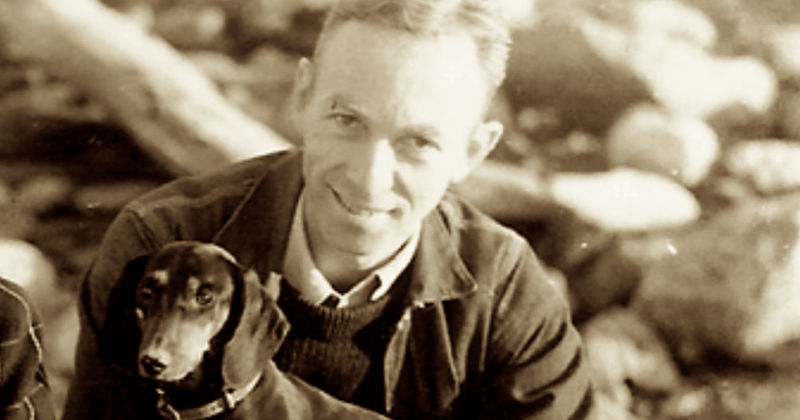 “She died sniffing life, and enjoying it.” Read E.B. White’s witty obituary for his dog Daisy.

This weekend will mark the birthday of celebrated author Elwyn Brooks White, otherwise known as E.B. White to the public and “Andy” to his close friends. White was born on July 11, 1899, in Mount Vernon, NY. In 1921, he graduated from Cornell University, where he earned his BA. He earned the nickname “Andy” while at Cornell. A few years later, he joined the staff of The New Yorker, which was still in its fledgling stage. His bylines also appeared in Harper’s Magazine.

White wrote over 20 books of prose and poetry, including Charlotte’s Web, Stuart Little, and The Trumpet of the Swan. He edited and updated several editions of William Strunk Jr.’s The Elements of Style and co-wrote Is Sex Necessary? Or, Why You Feel the Way You Do with James Thurber.

His work earned quite the stack of awards and critical acclaim. In 1963, White received the Presidential Medal for Freedom, along with 31 other Americans. In 1970, his third work of children’s literature, The Trumpet of the Swan, was recognized by The International Board on Books for Young People as an outstanding example of literature with international importance. He was later awarded the 1971 National Medal for Literature. In 1973, Trumpet received the Sequoyah Award (Oklahoma) and the William Allen White Award (Kansas). White was elected to the American Academy of Arts and Letters in 1973.

White’s love of animals is just as well known as his storied career. He once said, “Animals are a weakness for me.” So, it’s no surprise that his devotion to our furry friends would find its way into his writing. In 1932, he published a witty, heartfelt obituary in The New Yorker for his dog Daisy, who died after being hit by a Yellow Cab in front of a florist’s shop on University’s Place. In the short essay, White deftly navigates humor and an earnest sense of loss: “Persons who knew her only slightly regarded her as an opinionated little bitch, and said so; but she had a small circle of friends who saw through her, cost what it did.”

Read Daisy’s obituary in full below (and maybe grab some tissues, for the very sensitive empaths and dog parents).