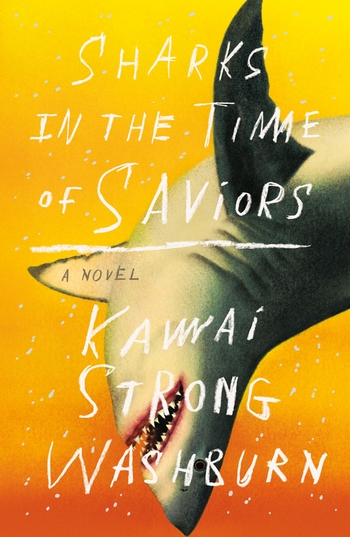 The following is from Kawai Strong Washburn's debut Sharks in the Time of Saviors. Washburn was born and raised on the Hamakua coast of the Big Island of Hawai‘i. His work has appeared in Best American Nonrequired Reading, McSweeney’s, and Electric Literature’s Recommended Reading, among other outlets. He was a 2015 Tin House Summer Scholar and 2015 Bread Loaf work-study scholar. Today, he lives with his wife and daughters in Minneapolis.

And  that was how we were when the third sign came. We couldn’t cut any more corners. But Royce had come through, as simple as a phone call to your father and a phrase, “I think I got something for you, cuz,” and suddenly everything pointed to O‘ahu. We’d sold some of our stuff and then we sold more, roadsiding it in Waimea, by the playground, across the street from the Catholic church, where all the trees grow up over the parking strips and everyone has to drive past if they’re headed to the beach. We’d made enough from those sales, the food bank’s help, and Section Eight to get a cushion, enough for five tickets to O‘ahu with something still in the bank.

Your father had a plan for the rest of the money—a glass-bottom boat cruise on the Kona coast. I remember telling him no, we couldn’t do that, we needed to save every last penny for O‘ahu. But he’d asked what kind of father would he be if he couldn’t give his children relief?

“They deserve more than they get,” he said, I still remember this, “and we gotta remind them that things is gonna get better.”

“But we don’t need some tourist cruise,” I said. “We’re not that kind of family.”

“Well,” he said, “maybe just once I wanna be that kind of family.”

I had nothing to say to that.

So Kailua-Kona, Ali‘i Drive, small stone walls and swerving sidewalks fronting the scoops of sugary beach and luminous ocean, then all the little storefront tourist traps, leading back like breadcrumbs to the beach hotels. Your father and I stood at the Kona dock, each holding a ticket for the boat ride, plus one for each of you kids, and we watched the tides surge and all the clean glossy boats rock and dip and shine slick with each swell. The pier was long and blacktopped and spined with fishing poles, and halfway along the dock’s edge a group of local boys were pitching themselves off, into the water, over and over, exploding into the ocean-froth of the boy who’d jumped before, chee-hoo’ing and slapping their wet feet across the wood steps back to the edge.

Then we were out away from the dock of Kona, sitting in a plush jointed couch on the Hawaiian Adventure, a trimaran like the types we always see drifting in the haze of the Kona coast, especially at sunset, boats with slides off the back and lobster-colored tourists jabbering on the covered decks. But this one had a middle hull with thick glass in the bottom that let us look down into the ocean, and as the engines pushed a mellow vibration again and again across the deck, the water went from something green-blue to a deep, almost purple color, and the coral grew up thick and knotted, in sections stuck out fingers or bloomed brains and the spiked red fans of sea anemones, swaying like the tide was a wind. I could smell the sun, the way it heated the old sea salt on the edges of the boat, and the sharp too-sweet fruity Malolo syrup in the fruit punch, and the sting of diesel fuels belching from the grinding engines.

Mostly we sat inside, all five of us in a row right down front in the plush stadium seating, looking through the glass bottom, me telling stories about which animal was which god, how they saved or fought the first Hawaiians, your father cracking jokes about how his Filipino forefathers only eat dogfish or the black fish with long noses, and the sun slanted in under the ceiling and the motor kept churning its hum up through our seats. I was somewhere warm and slow and Kaui was asleep in my arms when I woke without knowing why.

You and Dean and your father were gone, in fact no one was in the viewing cabin. Voices were rising out on the deck. I shifted Kaui from my lap—she complained—and I stood. The voices were clipped into basic commands: We’re going to make a turn, keep pointing, get the preserver. I remember feeling like the sounds were coming from the other side of a cavern, so far away and cotton-stuffed in my head.

I grabbed Kaui’s hand. She was still rubbing her eyes and complaining, but I was already bringing her with me as I climbed the stairs from the viewing cabin to the sundeck. Impossibly white. I had to shade my eyes and squint so hard I felt my lips and gums lift. People were gathered along the cabled rail of the slick white deck, looking into the ocean. Pointing.

I remember seeing your father and Dean. They were maybe thirty feet away from me and Kaui, and I was confused because your father was wrestling Dean back from the rail and Dean was screaming Let go, and I can get him. One of the deckhands in a white polo shirt and baseball hat pitched a red life preserver into the air, and it wobbled and wheeled out into the sky with the rope whipping behind.

Did I run then to your father? Had he pulled Dean off the rail? Was I gripping Kaui’s hand so hard it hurt her? I can assume, but I can’t remember. I only remember that I was at your father’s side then on the blazing-white deck, rising and falling with the waves, and all our family was there, except for you.

Your head was bobbing like a coconut in the ocean. You were getting smaller and farther away and the water was hissing and spanking the boat. I don’t remember anyone saying much of anything, except the captain, calling out from upstairs: “Just keep pointing. We’re turning. Just keep pointing.”

Your head went under and the ocean was flat and clean again.

There was a song playing from the speakers. A tinny, stupid-sweet Hawaiian cover of “More Than Words,” which I still can’t listen to, even though I liked it once. The engines churned. The captain was talking from the wheel upstairs, asking Terry to keep pointing. Terry was the one who’d thrown the life preserver that was floating empty in the waves, moving away from where I’d seen your head.

I was tired of being told to point, being told to wait, so I said something to Terry. He made a face. Then his mouth was moving under his mustache, words back at me. And the captain was calling again from above. Your father started in, too, all four of us saying things. I think I finished talking with something that made Terry start, so that his face flushed around his sunglasses. I saw myself in those mirrored lenses, me darker than I thought I was, which I remember made me happy, and my shoulders from basketball, and that I’d stopped squinting my eyes. Then my feet were up on the railing and Terry’s eyebrows were raised and he started to open his mouth at me. He reached for me—I think your father did, too—but I leapt into the big empty ocean.

I hadn’t been swimming long when the sharks passed under me. I remember them first as dark blurs, that the water told me the weight of those animals, a shove of wake against my legs and belly. They passed me and all four of their fins punched the surface, knives on the summit of dark swells, cutting for you. When they reached where your head had been, the sharks dove under. I started to swim after them but the distance might as well have been to Japan. I dunked once to try and see. Underwater there was nothing but a vague darkness and froth where the sharks were. Other dark colors. Pink and chummy ropes rising from the froth—I knew those would be next.

I didn’t have any more breath. I broke the surface and choked in oxygen. If there were sounds, if I yelled, if the boat was closer, I don’t remember. I went back down. The water where you were was all churn. The shapes of the sharks were thrashing, diving, rising, something like a dance.

The next time I went for air you were at the surface, sideways, prone and ragdolling in the mouth of a shark. But the shark was holding you gently, do you understand? It was holding you like you were made of glass, like you were its child. They brought you straight at me, the shark that was holding you carrying its head up, out of the water, like a dog. The faces of those things—I won’t lie. I shut my eyes as they neared, when I was sure they were coming for me, too, and if everyone was yelling and crying out, as I imagine they were, and if I was thinking anything, I don’t remember any of that except the black of my closed eyes and my prayers without a mouth.

The sharks never hit. They passed again below, around me, wake like a strong wind. And then I opened my eyes. You were there at the boat, clutched to a life preserver. Your father reaching down for you—I remember how angry I was at how slow he went, all the time in the world, and I wanted to say, Are you a fucking pau hana county worker? Grab our child, our alive child—and you were coughing, which meant you were breathing, and there was no red cloud in the water.

This wasn’t just one of those things.

Oh my son. Now we know that none of it was. And this was when I started to believe. 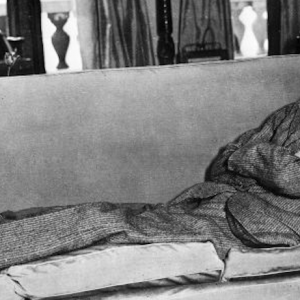 Lit Hub Weekly: April 6 - 10, 2020 THESE TIMES: André Aciman on how pandemics change us and the life to come • Coronavirus is a humanitarian crisis,...
© LitHub
Back to top