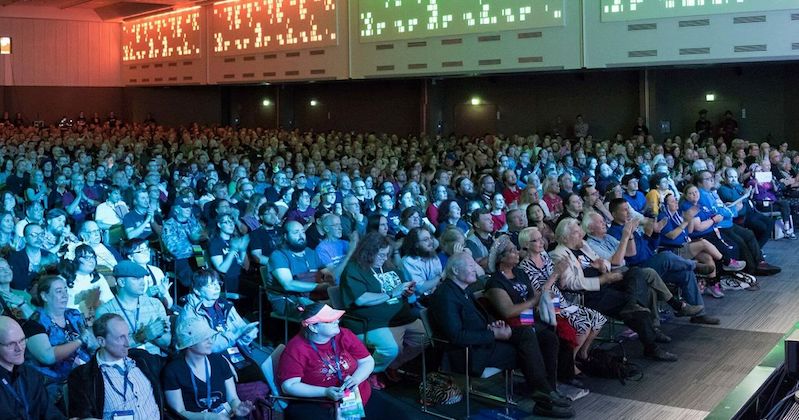 The science fiction world is having a bit of a week.

Today, New Zealand, the host of this year’s World Science Fiction Convention (WorldCon), virtually kicked off one of the world’s most popular sci-fi events. New Zealanders had been preparing for the international convention, which normally attracts thousands of attendees, for the last decade. Obviously the pandemic put an end to the organizers’ original vision.

Perhaps fans would have been satisfied had George R.R. Martin followed through with his plan to have the sixth book of his A Song of Fire and Ice series ready for WorldCon 2020. But this year wasn’t having it, and fans will have to endure another harsh winter before they can read The Winds of Winter, perhaps the final book in Martin’s renowned series.

It would’ve been nice for the story to end with fans’ playful calls to lock Martin up for not finishing the book, but then politics entered the conversation about WorldCon in a very unpleasant way.

Next year’s convention is scheduled to be held in Washington, D.C., but the location of WorldCon 2022 is yet to be determined. Once Saudi Arabia entered the bid to host, more than 80 SFF authors, organized by writer Anna Smith Spark, wrote an open letter opposing the country’s entry.

The letter authors, calling science fiction “the great genre of possibilities and pluralities,” noted that they normally would have embraced the city of Jeddah as a host site. However, the crimes of the current regime made that option unpalatable.

The signatories cited a 2019 Amnesty International report, which stated that the Saudi government had “escalated repression of the rights to freedom of expression, association and assembly. They harassed, arbitrarily detained and prosecuted dozens of government critics, human rights defenders, including women’s rights activists, members of the Shi’a minority and family members of activists.”

One of the most moving parts of the letter comes near the end, when the authors write that “many of us would ourselves not be able to write or to live freely under Saudi law. We refuse to attend an event if those staffing it cannot have the same basic freedoms.”