Series, Sagas, Cycles… How About We Call Them “River Novels”?

Kent Wascom: A Different Way of Thinking About Maximalist Storytelling

The attention-spans of readers, we are told, have shrunk, if not disappeared altogether. The chronically distracted just can’t be expected to sit through a novel, much less a novel that begets still more novels. And yet, look around your favorite bookstore and you’ll see us: the Ferrante-fevered, the Knausgaard-knackered, lovers of the novel in its most exhaustive and potentially exhausting form. We anxiously await the final installment of Hilary Mantel’s Cromwell novels and the first of Marlon James’s Dark Star. And we are hardly in the minority. Indeed, as Alexander Chee pointed out several years ago at this very website, our first narrative loves are often serial, our bookishness born in Narnia or Arrakis or Hogwarts. However goldfish-like our attention-spans, we still read (and maybe even write or want to write) fictions that span multiple volumes and share characters, settings, themes. We just don’t quite know what to call them.

There is the the ridiculously specific Multi-volume novel; the succinct Set; the cinematic Sequence (as Wikipedia would have it); the commercial Series; the hoary Saga; the elliptical Cycle; the dystopian Mega-novel; the classical Trilogy and its sister the Tetralogy; the Latinate Quartet and the paradoxically diminutive Quintet… (I’ve even heard Companion volumes, which sound like books that wouldn’t be allowed on public transit without the written permission of a licensed therapist.) The list, like the novels in question, goes on.

As someone who’s spent the past six years working on one of these things, I’ve given the naming question a fair amount of, well, attention. Like most matters of literary taxonomy, what a book or bunch of books is called should depend upon the books themselves and how their author sees them. This of course leads to further questions: do the novels share a governing authorial style, formal characteristics or POV character (Mantel), or does the style and focus change (Durrell)? Is this really one large novel that was broken up (The Lord of the Rings or Marias’s Your Face Tomorrow), or separate novels squished together (2666)? Must the books be read sequentially or in order of publication, or can they be taken a la carte? Is a novel-sequence just a big old linked story collection, and a linked story collection just a little bitty novel-sequence? You see how this can get. It says something that I didn’t find my preferred term until I’d finished the second book of my project, and it says even more about the process of writing these sorts of books that the originator of the term didn’t land upon it until he’d written the seventh volume of his own.

Roman-fleuve, literally the river-novel, was coined in 1909 by Romain Rolland to describe his own big old novel-sequence, the ten-volume Jean-Christophe. Rolland sought to explain his project as expansive, composed of seemingly distinct branches radiating out from a greater, generously paced work, ultimately settling on the image of the river. The term stuck, particularly in reference to the novel’s diverging narratives: when Rolland was awarded the Nobel Prize for Literature in 1915, the Swedish Academy described it as “a series of independent narratives” which, when taken in total, spoke to the larger society and culture. While the roman-fleuve has its roots in the massive opuses of early 20th-century French literature, the richness and applicability of the metaphor belies its origins. The river implies expansiveness and connectivity, unity and digression, all at once. The river-novelist embraces John Berger’s statement (brilliantly deployed by Michael Ondaatje in In the Skin of a Lion) that, “Never again will a story be told as if it were the only one.” There’s much to love about the term, but more than anything I love that its meaning, like my life, is inseparable from moving water.

I’ve always lived close by rivers and bays. I respect water and, because I live in south Louisiana, my life is governed by it from the pilings my house rests on to where I park my car on any given rainy day. My best and worst days have been shaped by water: within the span of two years my hometown and my birth-city were ravaged by hurricanes; my daughter was born during a 500-year flood, where I had to talk her northern grandparents through a maze of flooding roads to our house. Comparing novels to a river is not, for me, merely metaphorical exercise, but natural and true to my project, a quartet of novels set along the Gulf Coast of the United States, in what was once called West Florida. A place bounded to the west and east by the Mississippi and Escambia rivers, and to the north by Interstate-10/12. It started when I was an undergrad, when I first learned about the history of my region, and, perhaps most significantly, when I encountered the books of one notorious 20th-century Japanese writer, a river-novelist sadly better known for his death than his life’s work.

Yukio Mishima was, in his time, among the most celebrated literary figures in the world. His beautiful and often terrifying fictions twine violence and sexuality, explore the complexities and contradictions of personal and national identity. His life was extreme, even bi-polar, evolving from retiring young outré novelist whose early works contented with his own closeted sexuality to macho bodybuilder and pseudo-Bushido traditionalist. Like many Mishima readers, for better or worse, it was his life that first attracted me to his work, which is to say his life as rarified through the music of Phillip Glass and the film by Paul Schrader. Fevered reading followed, the shorter novels, the stories, the biographies. Then there was The Sea of Fertility Tetralogy, one of those rare reading experiences that doubles as demarcation point: I was no longer the same reader, no longer the same writer—the vague ideas I had about telling the story of my region suddenly had a shape, or at least a model. Beginning with Spring Snow (1969), the four novels address the Japanese experience in the first two-thirds of the 20th century, a period that saw Westernization and the decay of the Meiji aristocracy, the rise of militarist Empire, and what its author saw as the degradation of the national character that accompanied the post-war economic boom. In short, the Sea of Fertility is an elegy, but an elegy that condemns the mourners and the mourned.

“In the river, there too is the potential for change. The river-novel allows for variation: each volume may be independent in terms of technique as well as plot.”

The title of Mishima’s tetralogy comes from the Mare Fecunditatis, one of the lunar mares, dark plains of basaltic lava on the moon’s surface mistaken by 17th-century astronomers for seas. This misconception of darkness for depth and life, the idea of a teeming, living sea where in fact there is only airless death, gave Mishima the thematic frame for his work, that how Japan saw itself throughout the twentieth century was not what it was proven to be, or ever was. The delusion is embodied in the central character of Honda, who, following the first book, sees his childhood friend Kiyaoki subsequently reincarnated in the form of various troubled young men (in the second and fourth volumes: Runaway Horses (1969); The Decay of the Angel (1971)), and, notably, a young Thai woman (the third volume, The Temple of Dawn (1970)). Honda begins as the go-between in the doomed love-affair of Kiyoaki and fellow teenage aristocrat Satoko, and remains an intermediary between characters and the reader. As Honda ages and his country suffers victory, defeat, and finally the hollow triumph of economic resurgence, what Honda perceives as the essence of his friend (supposedly confirmed in each incarnation by certain birthmarks) grows increasingly perverted. In the end, Honda’s understanding of country, life, and afterlife, is destroyed in a final revelation that confronts the reader’s belief in the story itself. So the river-novel allows the author to confront and critique the reader’s expectations and, moreover, what they imagine to be true about a place and time.

In the river, there too is the potential for change. The river-novel allows for variation: each volume may be independent in terms of technique as well as plot. (William Vollmann does this in his Seven Dreams, another headwater of my own little river-novel, each of which has a distinct narrative voice.) Rivers, after all, change courses, flood, branch-out or dry-up, as do stories. These effluxions can enrich the narrative like delta loam, or turn it into an impassable morass. In my third novel, The New Inheritors, what began as an offshoot sub-plot, the story of the painter Isaac Patterson and his relationship to the natural world of the Coast, swelled so much that it became the heart of the book. To be fair, this doesn’t happen often, my process leaves behind far more parched streams and sloughs of despond. But to try and write the river, you’ve got to be willing to follow these paths for as long as you can, and what’s more know when to quit them and pick your way back toward the roar of the greater story.

Avoiding this, there are still more hazards, chiefly the tempting notion that by writing a sequence/cycle/saga/set the author has built some grand, unassailable affirmation of skill. No accident, then, that such books are so frequently and unironically described as “ambitious” and “monumental,” qualities that better serve dictators than writers. And while the notion might be a balm to ever-sore egos, it’s a mildly unhealthy and very boring delusion. What Mishima did, and what I hope to do, is no different than any other novelist’s task. Ultimately, the faults and favors of the river-novel, however fraught the metaphor may be for me, are only those of the novel writ large.

Kent Wascom’s first novel, The Blood of Heaven, was named a best book of the year by the Washington Post and NPR. It was a semifinalist for the VCU Cabell First Novelist Award and longlisted for the Flaherty-Dunnan Award for First Fiction. Wascom was awarded the 2012 Tennessee Williams/New Orleans Literary Festival Prize for Fiction and selected as one of Gambit‘s 40 Under 40. He lives in Louisiana. 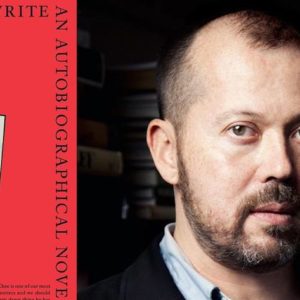 In this episode of A Phone Call From Paul, Paul Holdengraber reaches Alexander Chee in Italy and asks him about mentors (and...
© LitHub
Back to top