Scattering a Mother’s Ashes: On Grief, Intimacy, and Renewal

From the Memoir in Progress of William Pierce

And then he sprang a big one on us: he wanted to spread Mom’s ashes today. She wanted half to be spread in the gardens, and half at Jones Beach, where as a child she’d gone with her mother and sister nearly every summer day. That sun exposure, when she was immunosuppressed years later, had given her nearly twenty lesions a month, across her arms, legs, neck, and face, that her dermatologist would burn and freeze off: squamous, pre-squamous, and twice—jobs too dire for that simple burning—melanomas on her face.

Dad wanted to spread them in the stream below the house. That stream ran for about two months a year and the rest of the time was a muddy wash. It was mostly grown in now with a hazy mist of bamboo, a brake the size and shape of two Amtrak locomotives running along the lowland of their property—an example of what happened when an invasive species was introduced where it was suited but had no business being. That back half of their land (by “their” I still meant my parents, I couldn’t break the habit) was otherwise pristine Pennsylvania oak forest. Year by year, the mist of dusty green, an unchanging color summer and winter, rode further along that muddy track and bulked wider and higher.

She wouldn’t want to be there, my mom. But I waited until we were outside—Elaine had driven off for hours of well-timed and respectful errands—before asking if we could instead spread the ashes in her two favorite spots, both dedicated to her mother. The upper part of their land was seven acres of garden and fenced pasture. Beside the three-bay garage, on the far side of the house, was a liminal zone, at the forest’s edge, that she’d called Mother’s Grove. Part leaf-strewn ground, part struggling lawn, the trees had mulch circles around them, which she weeded, and there was a bench also, which she sat on particularly when she was missing her mom.

We talked for a minute, then Dad said, “Well, let’s go ahead,” and I could see, or thought I saw, that he was going to hold the heavy bag of light-gray ash in his right palm as he was doing now and he was going to spread, as if this were a bag of that now-banned herbicide Sevin, by holding the lip of the plastic between his fingers and gently shaking while he cantilevered the pouch over open ground. This too wouldn’t have been right—wouldn’t have been right for him any more than for Thom and me, and at best it would have left us doing this one at a time.

Most thoughts are amorphous in me—in all of us, I think. They don’t neatly take the form of sentences as they’re so often forced to do in books. But a sentence, a thought in words, came over me very powerfully: I will not shy away from touching my mother in any form.

The ashes were far finer and smoother than I’d been expecting.

I said—and could feel how the thought-sentence was absorbing and diverting language, leaving only fragments when I spoke—“No. Dad. I just want to . . .” and held the bag with him and reached in and gripped a handful.

The ashes were far finer and smoother than I’d been expecting. Maybe different crematoriums did it differently, but I’d heard that a person’s ashes were greasy. I’d heard there’d be small chunks of bones, that it would be difficult partly because of the overt physicality of it: this was a body burned. But my mother’s was a powder as fine as I’ve ever touched. The kind that clings to the lowlands of your fingerprints even after you rub your hands against each other. I took that first handful across to the low rhododendrons by the bench, the pachysandra, and the oak trunks, maybe eight long steps away. And by the time I got there I was crying as hard as I cried at her funeral. I’d wailed as she lay dead on her hospital pallet—maybe then I’d cried harder. But maybe not. And just moments before, as we crossed the driveway, I wasn’t at all sure how this would reach me, whether I’d cry or feel just a mellow sadness and relief that four years after her death we were finally taking care of another wish.

When I turned back, Thom was weeping and sifting ash from his fingers, too, at the base of another oak tree. Dad was reaching into the bag. We took turns like that, reaching in, but we sifted in unison, pouring her onto the Earth at our different speeds, in different places, together.

Dad judged the amount left. Should we go out to the White Garden? The White Garden was on what our parents called the Distal Six, the six unwooded acres not fenced in, not part of the old riding paddocks on this former horse farm. Mom planted it in honor of her mother, born Alice White, then Alice Jennings, a woman we called Bud, who was instrumental—as a working woman in the fifties and sixties and executive secretary to the vice president of Grumman—in the Lunar Module project, the Eagle that landed on the Moon. She had a pool of forty typists under her and sat on a dais, at a desk that faced their ranked and rowed typing tables. Her signature landed, too—I owned a copy of the poster that accompanied the LEM, and another hung in the Museum of Science in Boston—I’d happened on it one day by chance.

I had let go completely, or these feelings had taken me over without leaving room for any other voice, and I cried with a completeness I’ve rarely experienced.

The flower garden bloomed all in white. We whitened it further with ash, enough to brighten the dark ground. My crying hadn’t subsided, or rather it came just as hard when I reached in for her again. Dad and Thom, after we agreed to save the rest, maybe a quarter of the whole, for my brother to take with him on a trip to New York City—this unexpected chance to give her the second half of what she wanted—sat down in the gazebo, on cushioned lawn chairs, but it took me a long time to be able to join them. Usually when I cried there was part of me not crying, part of me asking what I was doing, and stopping me, so that I herked and jerked between crying and not. But now I had let go completely, or these feelings had taken me over without leaving room for any other voice, and I cried with a completeness I’ve rarely experienced.

When we got back to the house, Thom asked Dad his thoughts about Elaine. He said Elaine would love to get married—“and we do love each other very much”—but he preferred keeping things the way they now were because of the tremendous cost of getting lawyers involved. Thom asked, “You mean because of a prenup?” Dad said, “I don’t want to screw you out of any money.”

I was impressed and grateful that Thom was able to raise the subject without awkwardness. His detachment, his bias toward logic, served us well, allowing him to bring it up directly but very kindly. Dad and I were able to talk about these things, but the conversations were sometimes tricky because by the time I overcame my resistance and spoke, there was an emotional edge to my voice.

We advised Dad that maybe he should get married. We could help him find a new estate lawyer to write a prenup and update his will. After all, if he loved Elaine, money shouldn’t be the reason they didn’t.

When Elaine came home, it was three. I packed my things, and left when I was planning to. Thom was flying out the next morning. The three of them waved from in front of the garage, just as Mom and Dad used to do, and as always I honked goodbye at the end of the long driveway.

My daughter Abby wanted to stay at my apartment tonight to avoid being killed. She was ruthless about the game of Assassin. Half an hour after I left Dad’s, she saw a friend’s car in someone else’s driveway and, without knocking, crutched into the house and shot her.

The year’s first smear of bugs gathered on my windshield, a strange marker of the change in season.

By text, my girlfriend and I were working on a playlist. To make things safer, I voice-texted, but this was the most dangerous driving I’d ever done. I was, often in heavy traffic (and, through Hartford, miles of start-stop), examining my favorite albums in succession, tapping among the songs, trying this one, then that one, reminding myself which were which, since titles meant nothing to me, and following up with voice memos. This was for my birthday party in four days. “The Gorillaz, ‘El Mañana’ . . . LCD Soundsystem, ‘Tribulations’ . . . FKA Twigs, ‘Two Weeks.’” Emily played along on Spotify, proposing others: she remembered the Lower Dens’ “Brains / Propagation,” solicited some Bowie, asked which Talking Heads I’d choose. then hunted up the hip hop songs she knew I loved to dance to.

I’d left Harrisburg with 90 minutes to spare, but by dark I was running late. It was okay: Abby was still busy filming. I stopped at the Framingham Plaza, hungry and now with time to kill, and ordered my first Filet-O-Fish since intermediate school. It was the sandwich I used to get every time Mom took me to baseball.

William Pierce is co-editor of AGNI. He is the author of Reality Hunger: On Karl Ove Knausgaard’s My Struggle (Arrowsmith Press, 2016), a monograph first serialized as a three-part essay at The Los Angeles Review of Books. His fiction has appeared in Granta, Ecotone, American Literary Review, and elsewhere, and other work has appeared in Electric Literature, Little Star, Tin House online, The Writer’s Chronicle, Solstice, Glimmer Train, Consequence, and as part of MacArthur Fellow Anna Schuleit Haber’s summer 2015 art project “The Alphabet,” commissioned by the Fitchburg Art Museum. With E. C. Osondu, he coedited The AGNI Portfolio of African Fiction.

The Seeds of Ancestors: A Day at Soul Fire Farm 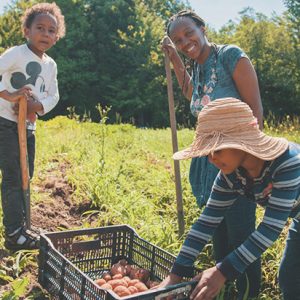 The Seeds of Ancestors: A Day at Soul Fire Farm Emergence Magazine is a quarterly online publication exploring the threads connecting ecology, culture, and spirituality....
© LitHub
Back to top
Loading Comments...