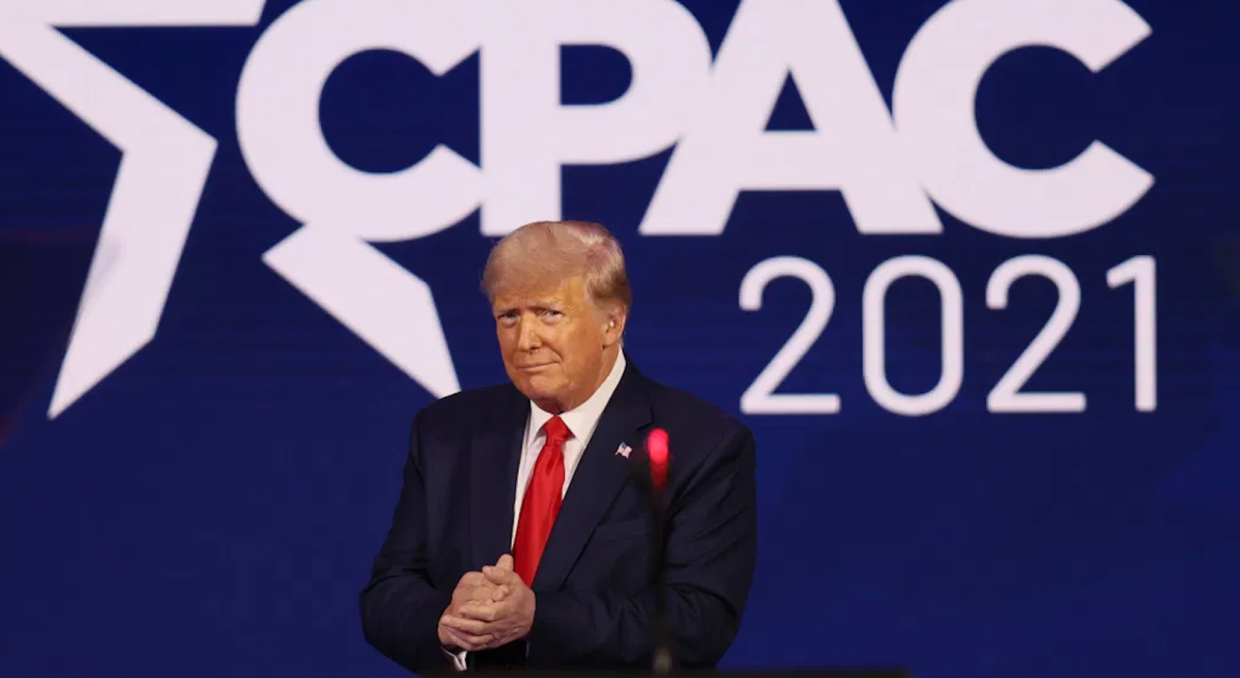 Timothy Denevi on the Apotheosis of Donald Trump, Golden God

The horns started at noon today. On the sidewalk down below the hotel hundreds of supporters had gathered, perhaps ten times as many the day before. The counterprotestors were back, too, but not with reinforcements. I watched from my balcony as the MAGA banners, the anti-Biden flags, and homemade white posterboard placards cluttered the curb. HONK IF YOU LOVE PRESIDENT TRUMP, they demanded. And the cars, looping up and down the avenue, complied. By the time I got myself together and headed downstairs, the horns had taken on a steady pace, bleating in martial time. The result was an endless blare that I could hear when I shut the door behind me. I could hear it in the hotel lobby, in the elevator. I could hear it by the pool.  “I think it’s got to be locals, too,” said the friendly blond bartender at Coconuts, the Hyatt’s outdoor bungalow bar. She was from the area, she said, and knew some of the local Floridians, those nearby residents of Orlando and its suburbs, who now circled the Hyatt to honk, yell, and jeer their support. Together, squinting into the bright blue day, we watched the tops of the MAGA flags beyond as they waved like banners over a rampart.

A lot has been made of the “civil war” raging inside the Republican party, and, for what it’s worth, who’s in, and who is out deserves a closer look. One person, supposedly out, was Congresswoman Marjorie Taylor Greene. I attended her talk yesterday, not realizing that, while initially advertised as a CPAC speaker by the conference’s app and website, she was actually speaking at a session hosted by a sponsor. This reportedly stumped some attendees who, looking forward to hearing her speak, were sad to miss their chance, but it did not stop me, or the room full of supporters who jammed into a small, poorly ventilated space to meet her.

Congresswoman Greene does not appear on any official footage from this weekend, if we are to take her word for it, they hadn’t even given her a working mic, but we had not assembled there by accident. And while a handful of the people who came to hear from Marjorie trailed out after her speech, many more of them lingered to hear the man who had introduced her—a former Trump campaign staffer and president of Look Ahead America, a CPAC sponsor, Matt Braynard—interview Jack Posobiec. Now, it’s fair to say that the conference officials have no control over what programming sponsors put on in their session rooms, which is helpful when your sponsor decides to interview a man like Posobiec, who the Southern Poverty Law Center says collaborated for years with white supremacists, neo-fascists and antisemites, but I do wonder if that liability extends to the words of the sponsor themselves.

Braynard, in his introduction for Posobiec, explained that he wanted to talk to the audience about something he needed their help with. He was hoping to get their financial support for a project of his: a legal fund to assist the protesters of January 6th, so many of them “innocent bystanders,” who as he characterized it had been unfairly targeted by their federal government. He passed around contribution forms and pens, and as they bent over the paperwork, he told them how hard it had been to get anyone to listen to this proposal in the mainstream media.

“Crooked!” a woman in the audience bellowed.

“In the end I got just three responses at all. One was Michelle Malkin”—at the mention of her name the crowd cheered loudly—“and the other…” Braynard paused here, but it was more for dramatic effect than out of caution. “They’re a little controversial.” He was talking about Nick Fuentes, a virulent 22-year-old holocaust denier and white nationalist who’d spent this weekend hosting his own political action conference, AFPAC, within walking distance of CPAC. “I don’t agree with everything they say,” Braynard said about Fuentes and his followers. “But those are our people, too, in that audience. And we need to reach them.”

It was an astonishing admission. CPAC can argue that this was not “an official conference event,” but it took place in the same building as that conference, featured a star Congresswoman who was attending that conference, was presided over by a sponsor of that conference, and as such conferred legitimacy to both white nationalists like Fuentes as well as the insurrectionists already charged for attempting to overthrow the American government on January 6.

It was as if the organizers of CPAC had hoped to have it both ways: endorsing an extremist event, with all the legitimacy an organization that features an American president as its keynote speaker can bestow, while at the same time shielding themselves from the ramifications of whatever extreme comments that speakers like Marjorie Taylor Greene and Matt Braynard might make.

Donald Trump was scheduled to speak at 3:40 pm. Outside the hotel, the number of supporters continued to grow. I could no longer see the counterprotestors, and yet the energy from the crowd was such that I felt sure they had to still be there. Inside the center, I peered out through the large bright windows on the conference floor. The sidewalk was teeming with Trump’s supporters.

I decided to wait at the entrance to Media Row so I could watch him arrive. But twenty minutes went by. Then thirty. Forty-five. At last, through the glass walls beyond, his motorcade appeared to darken the tropical concrete of the street.

For an instant I was reminded of a moment four years earlier, on the night before his January 20 inauguration, when, driving in his limousine up 17th Street, the president-elect and his wife became aware of the crowd that had gathered there to see him: I watched, in the next moment, as he swiveled forward in his seat, turning to their adulation as if toward the sun.

As Trump returned a final time to his big lie—“What happened at 3:02 in the morning?” he shouted, “what happened?!”—a sheen of sweat had spread conspicuously across his cheeks and chin.

Today he flashed by quickly—a simple silhouette darkening the back of a non-distinct sedan. By the time he was finally ready to take the stage, the audience had been waiting for more than an hour.

By then I’d made my way to the overflow room. And it was here, with hundreds of other conferencegoers, that I watched the former president take the stage for the first time since his January 6 speech at the Ellipse.

When the president finally emerged, the attendees around me, many of them older and in failing health—you’d have a tough time mistaking them for the conference’s wealthiest VIPs—rose to their feet. They applauded and cheered. Some pulled down their masks, while others hadn’t been wearing them to begin with.

This overflow room at the Hyatt convention hall was for CPAC attendees whose passes did not permit them to watch from the main ballroom. At the front was a large screen, and the chairs, arranged before it in long rows, were full. As the speakers in the ballroom blasted “Proud to Be an American” the crowd sang along. One woman put a hand over her heart. Another, a blond in a long flowing skirt, began to cry. I watched her press a tissue to her eyes. They seemed to stay standing for a long time.

I left them then to their visions of the former president. Instead, making my back across the hotel, I managed to find a free table near the pool, where, from the screen of my phone, I watched Donald Trump’s much anticipated speech, the cheers of the attendees beyond like the faintest echo against the blue tropical afternoon.

He spoke for an hour and a half. There was some new material; riffing off the previous days’ programming, he offered rants about women’s sports, and trans athletes. But mostly, it felt strikingly—if familiarly—disjointed. He fell back on the outrageous claims of victimization and voter fraud that had led to the storming of the Capitol in the first place. He kept saying things like “Puppets for China,” that didn’t make much sense. On and on it went, his list of ever-growing grievances. “When you look at the crowds outside,” he said at one point, “they will take your seat in two seconds, they want your seat… And that’s what I’m announcing that I will be actively working to elect strong, tough, and smart Republican leaders… I may even decide to run a third time…”

As he was finishing up, the bartender stopped by again. “What’s he saying now?” she asked.

“Just more of the same,” I said. “You know: ‘The nurses are stealing my money!’ Etcetera.”

As Trump returned a final time to his big lie—“What happened at 3:02 in the morning?” he shouted, “what happened?!”—a sheen of sweat had spread conspicuously across his cheeks and chin. The moisture seemed to brighten his face in a manner that felt unnatural, even for him, more burgundy than the usual orange. Still, there was something familiar about it. At last I realized why: by the end of this absurdly drawn-out speech beneath the hot lights of the Hyatt’s modest main ballroom, Trump’s skin had taken on the same glossy sheen I’d seen here at the conference a few days earlier, in the exhibition hall, where I’d snapped a series of photographs with the garish, golden, cartoon-shaped idol that nevertheless evoked so effortlessly the man whose speech was concluding here at last.

Later that night, as the other convention-goers started departing Orlando en masse, finally setting off on their separate ways, I headed to the Hyatt’s groundfloor bar and enjoyed, for what felt like the first time in ages, a full sit-down dinner.

At last, it felt like there was no one left to avoid. I didn’t have to worry about dimming the screens of my computer and phone. I stopped checking to see if someone was trying to look over my shoulder. I slipped off my conference badge, unbuttoned my dress coat, and for the first time in days, I wasn’t focused on the dangers of not blending in.

I was thinking again of Matt Braynard’s deeply disturbing comments from the evening before, how, in my opinion at least, they revealed all we needed to see about the direction in which the conservative movement was really headed. But I was also thinking about the thousands of ardent supporters who’d spent the day in and around the hotel, in growing exultation, of Trump’s imminent arrival. It hadn’t mattered that by the time he finally got here, he’d kept so many of them waiting an extra hour in stale, poorly ventilated ballrooms. Of course they didn’t mind. Neither did the protestors with their signs and circling caravans on the nearby street.

Even now, hours later, walking through an open-air corridor back to my room at the end of the evening, I was struck by the fresh sense of stillness that had descended on the hotel—a quiet that I couldn’t help but notice was suddenly punctuated, as if on cue, by a brief, blaring horn from somewhere out in all that ambient traffic beyond.

Akwaeke Emezi is publishing a romance novel inspired by Florence + The Machine. 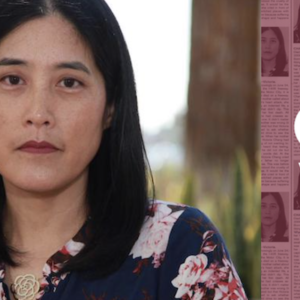