An Appreciation by Benjamin Markovits

The guy could make anything interesting. When Herzog’s girlfriend orders English muffins in a diner, she calls after the waitress: “Tear mine. Please don’t slice them.” And you think, that’s right, so the rough ends burn a little in the toaster. But maybe this also means she’s a piece of work. Charlie Citrine, sitting in the steam baths, watches the naked attendant pitch a bucket of water onto the hot rocks. Charlie can’t help but notice his “testicles swinging on a long sinew and the clean anus staring out.” Of course, this kind of detail only gets you so far. You need a sorting mechanism, some larger intelligence, to put everything in its place.

Bellow was big on brothers, especially big brothers. Look kid, they seem to be saying, this is how it is—why don’t you pay attention? And reading him feels a little like that. On every page you have to stop at least once, because important advice is being given. ‘Trouble rusts out the system,” he writes in Seize the Day. That seems to me a great line—every bad thing that happens puts salt in the undercarriage. You can’t really wash it out. Tommy Wilhelm “lies first boastfully and then out of charity to himself.” Boastfully, because he hopes to make it in Hollywood—he’s riding an ego-wave. But later, when it all goes wrong, some decent and reasonable part of himself recognizes, sort of distantly tender, you poor schmuck. It’s ok, for a little while, to keep up the lie. As Bellow wrote elsewhere, people need to hear good things said.

A lot of crazy shit made its way into the novels. Anthroposophy, Reichian therapy. Reading his letters, you realize, he believed some of it, too. But the great appeal of crackpots and conmen is that they talk about things that matter. And often, not always, he managed to transform their craziness into something not-crazy. Our dreams repeat the day’s events for the gods’ benefit— they pass along information. Not in words exactly, but “feeling-tones.” And the gods use this information to guide us. But lately our lives have become full of such crap, we operate at the “dog-food level of things,” that these higher beings can’t understand our dreams. Leaving us both adrift, gods and people.

I’m not always sure why I like this kind of talk so much. A peculiar foot needs a peculiar shoe—this is another Bellow line. There are things about him that can’t help disappointing. His women are painted too thickly. And the stories sometimes run away from him. He wrote like he lived, episodically, and his fund of wisdom doesn’t tell you much about how to live a narrow life deeply. But the “feeling-tone” of what he has to say is basically loving and generous. In the last line of his last letter, to his friend Eugene Kennedy, he wrote: “I send an all-purpose blessing.” This is what his writing feels like. 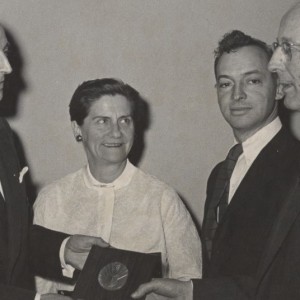